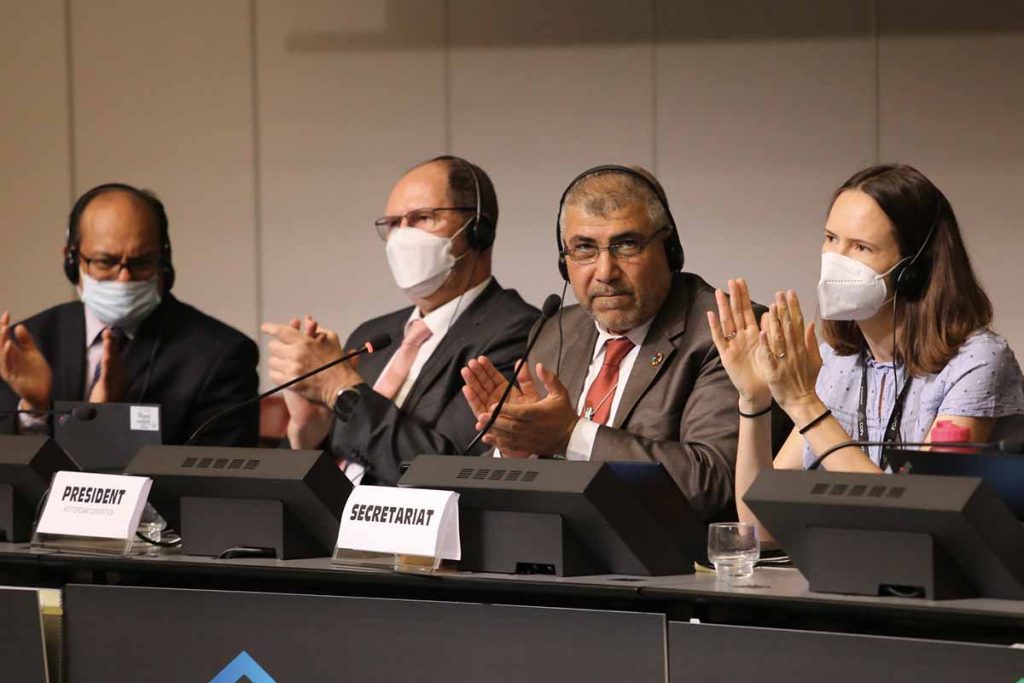 Countries on June 15 approved changes to the Basel Convention on the Control of Transboundary Movements of Hazardous Wastes and their Disposal. | Credit: IISD/ENB | Angeles Estrada Vigil

Countries on June 15 approved e-scrap-related changes to the Basel Convention on the Control of Transboundary Movements of Hazardous Wastes and their Disposal, which is an international treaty governing how waste is moved around the world. More than 180 countries are party to the convention, but the U.S. is not.

The decision was made at the 15th Basel conference of the parties (COP), being held in Geneva through June 17.

The amendment’s impact on U.S. e-scrap and reuse companies will depend on exactly which materials are being shipped (and whether the shipment contains a high enough level of hazardous materials to meet thresholds).

Other factors include whether shipments are headed to a country that already has a bilateral trade agreement with the U.S., and whether countries around the world are able in coming years to improve a system through which they give each other permission to trade scrap shipments.

“In a nutshell, this means that there will likely be much less of a global circular economy when it comes to e-scrap,” said Adam Shine, president of New York processing company Sunnking and current chair of the Electronics Division of the Institute of Scrap Recycling Industries. “There are a tremendous amount of materials that are shipped out of the U.S. for the purpose of repair and reuse and, as it stands, this will no longer be allowed to any country that is a party to Basel.”

What the changes mean for U.S. shippers

The Basel treaty already requires what’s called prior informed consent (PIC) before a Basel party country can ship e-scrap that contains hazardous materials to another Basel party country. Without that consent, the shipment is illegal.

Currently, material that doesn’t contain high concentrations of hazardous metals or chemicals can travel freely between Basel party countries without prior informed consent. Those non-hazardous materials are defined by a green light list in Annex IX (printed circuit boards could fall under either the red light list or green light list, depending on their concentrations of hazardous metals and chemicals.) The green light list also includes electronic components destined for reuse (repair, refurbishment or upgrading in the receiving country are allowed, but not major reassembly).

However, the convention has another list, Annex II, which could be considered a yellow light list, specifying materials that aren’t automatically considered hazardous but could be dumped by a developed country on a developing country and are, thus, considered by Basel worthy of some level of regulation. Those materials, which currently include household garbage and residue from incinerated household trash, require special consideration (and also require prior informed consent).

The COP on Wednesday approved an amendment first proposed by Ghana and Switzerland in 2020. The Ghana/Swiss proposal essentially moves e-scrap definitions from the green light list to the yellow light list. The effect is to make prior informed consent a requirement for those non-hazardous e-scrap shipments. The changes take effect Jan. 1, 2025.

The change does not affect electronics that are tested and working and are being sold for reuse. Rather, it applies only to broken and dismantled/shredded e-scrap streams.

As a result, non-hazardous e-scrap, which will be controlled on the yellow light list starting in 2025, will not be able to travel from the U.S. to Basel countries.

An important exception to that is if there’s a separate bilateral or multilateral agreement in place between the U.S. and the Basel party country or countries. The U.S. has those agreements in place with Canada and the Organization for Economic Cooperation and Development (OECD), which is a group that consists of many of the world’s developed countries.

Because of that exception, the practical effect may be that Basel Convention prohibits U.S. exports of non-hazardous printed circuit boards, for example, to Southeast Asia, but those same shipments could still travel to smelters in Japan or Belgium, which are OECD member countries, as long as those countries provide prior informed consent.

What stakeholders are saying

The idea behind putting non-hazardous e-scrap in Annex II was that the prior informed consent process would produce some transparency on international trade, explained Patti Whiting, senior international policy analyst at global electronics processor Sims Lifecycle Services. Whiting was previously the U.S.’s Basel authority while working for the EPA.

“I think we all want the greenest, most practical, environmentally sound solution, and I think in the end this could be workable,” she said while in Switzerland for the conference. “The problem right now is the PIC is broken.”

For example, one country at Basel proposed a requirement giving importing countries 30 days to consent to a shipment, but every developing country that spoke up at the conference said that wasn’t enough time for the realities of global logistics, Whiting said. That’s because some countries lack the resources to administer the PIC process.

She thinks that, between now and 2025, “a lot of work will be done by the parties to try to fix the PIC system.” Basel countries will also likely move to develop guidance to explain the decision in more detail.

Shine of Sunnking agreed that significant updates are needed for the PIC process.

“This ruling will likely put legitimate repair outfits out of business,” he said. “Likely, there will be U.S. companies that step up to handle repair units in the U.S.; however, it will lead to weakened demand, lower margins and ultimately higher recycling costs to businesses and consumers.”

Activist group Basel Action Network (BAN) cheered Wednesday’s decision, which it had been pushing for in Geneva.

“E-waste exports, particularly to developing countries, typically result in environmental harm even when the material is deemed non-hazardous prior to its being melted or stripped with acids,” Jim Puckett, BAN’s executive director, stated in a press release. “This new agreement will go a long way towards protecting the environment and human health worldwide.”

The release says BAN was instrumental in ensuring that e-scrap processed in the country of origin to a “safe, non-hazardous concentrate … will still be allowed to be exported freely without trade controls.” BAN founded the e-Stewards electronics recycling standard, to which about 80 e-scrap facilities are currently certified.

“This exemption ensures that more electronics will be recycled into commodity-grade secondary resources rather than thrown into landfills or incinerators,” the release states.

BAN’s release noted that U.S. companies would still be able to ship non-hazardous e-scrap to countries that have bilateral or multilateral trade agreements with the U.S., such as OECD countries, as long as they still practice PIC.

BAN claims the change will prevent confusion at borders.

“Ensuring controls for all e-waste, whether hazardous or not, will save considerable time and prevent confusion for all stakeholders and border control agents as nobody will be faced with having to prove it is hazardous or not,” the Seattle-based group wrote in a May 24 delegate alert. “The expense of sophisticated lab analysis is a greater burden for developing countries.”

The amendment is the latest Basel Convention change aimed at restricting the trade in scrap. In 2019, the COP approved changes adding mixed scrap plastics to the yellow light list, which required prior informed consent. The requirements that went into effect starting in 2021.