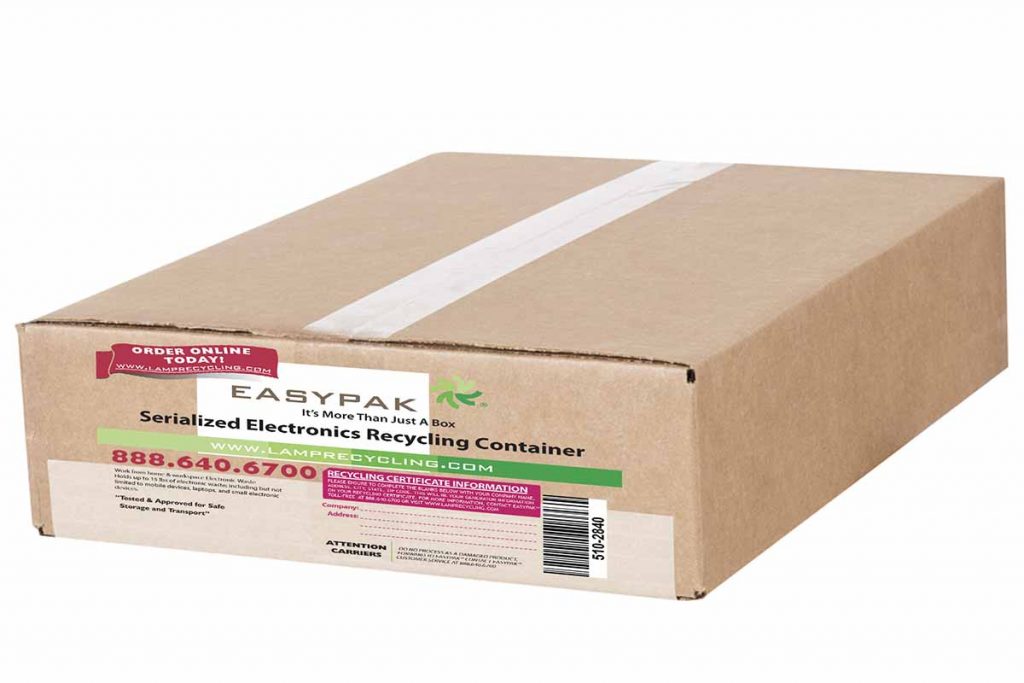 TerraCycle is a Trenton, N.J.-based company that recycles difficult-to-recycle materials. Its Regulated Waste division, which sprouted from the company’s 2017 acquisition of Chicago-based Air Cycle Corporation, has predominently recycled fluorescent bulbs and batteries, as well as some scrap electronics.

This year, the Regulated Waste Division began pushing further into the electronics recycling space with the launch of mail-in and bulk-collection services providing certificates of data destruction and recycling that include the make, model and serial numbers of devices processed. In February, it launched its pallet-based BulkPak service. And around June, TerraCycle began marketing EasyPak, the company’s years-old mail-in service for electronics recycling, as a serialized service. TerraCycle launched a new ITAD website this summer.

Joe Day, TerraCycle Regulated Waste’s director of business development, acknowledged the ITAD-related services provided aren’t unique to TerraCycle, “but it is something we thought was timely and relevant, just seeing how many data breaches are making headlines.”

Employing an asset-light business model, TerraCycle collects, aggregates and ships recyclable materials – often on behalf of consumer product brand owners – but it doesn’t own or run the processing facilities itself. Instead, the company contracts with processors to recycle material on its behalf.

Through the EasyPak program, organizations or individuals buy UPS-shipping-paid boxes and send computer equipment straight to a Clean Earth facility for processing, Day said. Clean Earth provides certificates of data destruction and recycling that list the make, model and serial numbers of each device processed.

In an interview, Day, who started working for Air Cycle 20 years ago, noted the years-long and ongoing shift away from mercury-containing fluorescent lamps and toward the use of LED bulbs, which are not a regulated waste. That has put pressure on Air Cycle/TerraCycle to come up with different services to diversify the portfolio, leading the company to expand its core electronics recycling services, he said.

Day noted that TerraCycle’s electronics program is still based on material being recycled, rather than refurbished and resold. But TerraCycle does provide a separate collection service that will pick up a large number of devices and will process them with an eye toward refurbishing and resale.

In addition, as part of its expanding suite of services, TerraCycle is now supplying data-destruction equipment for customers that produce a large number of used drives. The company is selling the Destroy-It Hard Drive Punch, which punches a steel die through drives, and a line of degaussing products.

Separately, Clean Earth on Dec. 7 announced its own mail-in recycling service, called AssetSure. Marketed for businesses, the AssetSure program sends prepaid shipping labels and packaging to customers so they can send their electronics to a Clean Earth facility for data destruction and recycling.

Both TerraCycle and Clean Earth tied the mail-in services to the COVID-19-era need to securely recycle electronics used by employees working from home.

“With an increase in remote work, there is an elevated risk for e-waste mismanagement,” David Stanton, president of Clean Earth, stated in the press release. “Our customers can feel confident knowing their expired IT assets will be handled in a responsible and compliant manner to protect their data, brand and our environment.”

In a release, Kevin Flynn, global vice president of TerraCycle Operations and director of TerraCycle Regulated Waste, noted that IT departments in all industries are in need of dependable data sanitization.

“The need to outfit workers with the latest remote-ready tech while reliably managing data on old devices and recycling them appropriately has exploded,” Flynn stated.