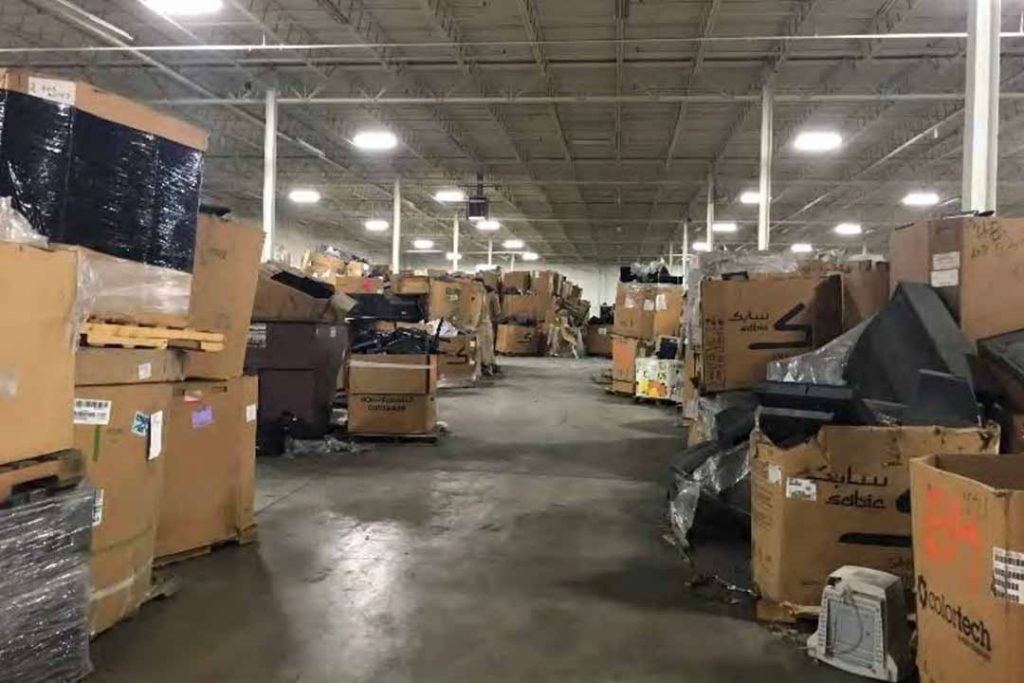 Some of the world’s largest electronics manufacturers are now being sued over Closed Loop Refining and Recovery’s Ohio CRT stockpiles.

Garrison Southfield Park and Olymbec USA own Columbus, Ohio warehouses that were leased by Closed Loop Refining and Recovery before the company failed in 2016. The facilities hold an estimated 158 million pounds of CRT materials. Garrison Southfield Park estimates it will cost over $16 million to clean out and decontaminate its two warehouses, and Olymbec USA estimates it’ll cost over $5 million to do the same for its warehouse.

In March 2019, the landowners filed a lawsuit against over 40 e-scrap companies that shipped CRT materials to Closed Loop’s Ohio locations (Closed Loop also has facilities in Arizona). The landlords want those suppliers to pay to help clean up the sites. Since then, two dozen defendants have signed settlements and agreed to pay. Others say federal law protects them from liability for shipping material to Closed Loop, which had been an R2-certified company.

On Aug. 10, the landowners opened a new chapter in the legal battle by filing amended complaints naming as defendants the OEMs and MRM. The landowners say those entities are legally responsible to help pay for the cleanup.

The nearly identical complaints allege the OEMs had a central role in directing their e-scrap vendors to ship material to Closed Loop, even though the OEMs knew – or should have known – the material wouldn’t be properly recycled.

“OEM Defendants selected Defendant Closed Loop as its downstream e-waste ‘recycler’ either by (a) requiring persons and entities transporting materials for which the OEMs would claim extended producer responsibility credit to meet a price point that only Defendant Closed Loop could meet or (b) by specifically requiring those persons and entities to transport those materials to the Properties via contract or otherwise,” the documents state.

The new complaints were filed in U.S. District Court for the Southern District of Ohio after the landlords obtained internal information from the e-scrap processor defendants. The information was obtained by Garrison Southfield Park and Olymbec USA through “discovery,” which is a pre-trial process through which litigants share with each other potential evidence for use during a trial.

The complaints level a number of accusations at the OEMs, claiming each of them “arranged for the transport of CRTs and other e-waste to the Properties during the period from 2012 through 2016 in an effort to demonstrate compliance with extended producer responsibility obligations under various state e-waste recycling laws.”

The complaints say that even if the OEMs didn’t knowingly participate in Closed Loop’s “sham recycling scheme,” they arranged for the transport of materials there directly or indirectly.

The document claims OEMs had a series of contracts with e-scrap companies that arranged for material to go to Closed Loop. Additionally, the complaint alleges, “the OEM Defendants leveraged their commercial advantage, using the prospect of high volumes of CRTs and other e-waste to negotiate per-pound ‘recycling’ fees that were well below what the market could support and that would not allow for responsible recycling in compliance with the CRT conditional exclusion.”

To support the latter point, the complaint quotes Brent Benham, a former Closed Loop leader, who claimed in court papers that the prices Closed Loop charged for CRTs “were set by the OEM suppliers and that Closed Loop had virtually no market power to set those prices.”

The lawsuit also quotes Benham as stating in court papers that Closed Loop’s business plan failed when market prices for recovered commodities fell and the OEMs failed to increase payment rates to CRT processors to compensate. Finally, it quotes Benham as alleging that OEMs “are involved in the process of choosing recycling or disposal options for CRTs.”

Additionally, the lawsuit says the OEMs failed to exercise reasonable care to determine whether Closed Loop was operating in compliance with the law and had a feasible means of recycling the material.

The OEMs haven’t yet responded in court to the new filing. E-Scrap News sought comments from OEM defendants on Aug. 11. Dell and Sony were the only two that could be reached and responded by deadline. Spokespeople for both companies said their policies preclude commenting on pending or ongoing litigation.