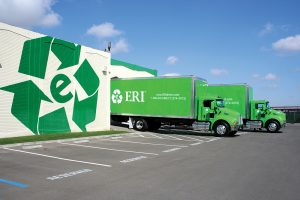 ERI is using machinery with artificial intelligence to sort materials coming out of a shredder. It’s the first publicly known case of an AI robotic system sorting e-scrap.

The company finished installing the Super Automated Machine, or SAM, at its Fresno, Calif. headquarters in December. The system relies on artificial intelligence technology developed by AMP Robotics, located in Denver.

For ERI, robotics technology provides speed, efficiency, flexibility and the ability to manage staffing challenges. The company plans to install a number of robots at other ERI locations over the next year, starting with a new facility in Plainfield, Ind.

“It took us three years to come up with, but it’s unbeatable,” John Shegerian, co-founder and executive chairman of ERI, told E-Scrap News. “[It’s a] game changer on our commodities.”

Over the past several years, AI robots have been employed in municipal materials recovery facilities (MRFs), where paper, plastic, glass and metal recyclables are sorted and shipped off to market. Multiple companies are offering the technology.

The mechanics of robots are relatively straightforward: An arm over a belt picks materials off a conveyor belt and drops them in a chute, just like a human sorter would do. For household recyclables, they usually “grip” items using suction.

The leap in recent years is the robot brain, or its ability to identify items. The systems examinine images from cameras pointed at the belt and identify items based on their visual characteristics – size, shape, color, texture and more. More powerful computers have allowed those decisions to be made in fractions of a second.

The computers get a learning head start by examining thousands upon thousands of still images of recyclables, before they watch an actual stream in a working facility. The artificial intelligence allows the robotic pickers to learn and improve their accuracy over time. They can prioritize materials they sort in situations in which it’s impossible to pick all of the items. And different units can remotely share their material recognition knowledge with each other.

AMP Robotics and ERI’s engineering team worked together to adapt the system to an e-scrap stream, which meant teaching it how to identify shredded material and equipping it with an effective suction system. Today, SAM is sorting shredded materials ejected by an eddy current separator, Horowitz told E-Scrap News. SAM is capable of identifying and sorting printed circuit boards, stainless steel, aluminum, black plastic, brass and copper, capacitors, meatballs (a term for scrap motors), wire and other steel.

A significant challenge in adapting the robot to e-scrap was developing a reliable and robust gripper, Horowitz said. The challenge involved ensuring a good suction on shredded material, which is smaller than typical curbside recyclables and is folded and fractured.

The partners experimented with mechanical grippers but decided against that approach for multiple reasons. Mechanical hands bring about speed limitations, he said. Also, pinching items against a conveyor means you can’t have other materials nearby, and getting that space between materials would have required significant adjustments to the line.

In the end, AMP and ERI used trial and error to find the right components for a suction gripper. “We really had to tune all those parameters,” Horowitz explained.

With unemployment low nationwide, recruiting staff is a challenge for all recycling industry players. For ERI, robotic technology allows the company to re-assign employees to higher-value roles, such as working in ITAD departments, Shegerian said.

The robots also provide a level of sorting certainty, because they show up every day for work. AMP Robotics also noted use of robots can mitigate employee health and injury risks.

ERI, which operates eight facilities across the U.S., sees more robots in its near future. In Indiana, a vision system has been studying the look of the shredded materials stream to help a robot identify items. The robot, itself, is expected to be installed this year.

Within a year, ERI expects to have 10 to 12 of the SAM units operating in the U.S. After Indiana, ERI expects to install robots in Holliston, Mass. Each location will need at least three SAM units, Shegerian said.

He declined to discuss the SAM leasing or purchase arrangements, noting those details are covered by a privacy agreement.

ERNIE is a self-contained unit that destroys LCD screens and separates materials while also capturing air in the chamber, said Shegerian.

Crews are still adjusting the system, he said, so he doesn’t yet have a clear sense of how many units per hour it will be able to process. Unlike SAM, ERNIE does not use artificial intelligence.

ERI developed ERNIE to prepare for a future in which there are fewer CRT devices in the end-of-life stream and more flat-screen TVs. The company plans to install at least two ERNIEs – and maybe a third – at other locations over the next year or so, he said. The second and third locations to receive a ERNIE units will be Indiana and Massachusetts.