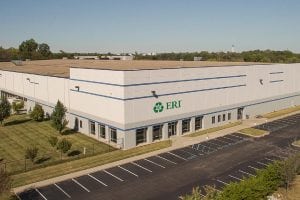 The nationwide e-scrap company moved into a 315,000-square-foot facility in Plainfield, Ind. late last month. The space is some 90,000-square-feet larger than the company’s previous Indiana site, located a mile away.

In an interview with E-Scrap News, Kevin Dillon, the company’s co-founder and chief marketing officer, said the facility can process 50 million pounds per month when running at full capacity. That’s a 50 percent increase from the previous site’s throughput capacity. He estimated there will be as many as 500 workers at the new site.

ERI’s growth was driven by the increasing volume of material coming through its doors. Dillon noted that Indianapolis, which is less than 20 miles from Plainfield, is geographically well-situated, because material can be transported to the city from any location east of the Rockies within 24 hours.

The massive size of the new facility allows it to house what ERI describes as an “enormous” shredder, which is capable of processing 50,000 pounds of electronics per hour. But the shredding and separation system is only one part of the operations there.

“We refurbish about 60 percent of the products that come in our facility,” Dillon said, noting that the company is increasing the volume of devices it refurbishes, a trend that’s driven by the increasingly diverse devices coming into the stream.

Particularly given the trend of product lightweighting, the economics of shredding are changing. Refurbishment and repair can help drive up the value a company realizes, but it requires highly skilled workers who must frequently learn the ins and outs of new devices.

ERI draws a distinction between the materials it will process for reuse and refurbishment, compared with what traditional IT asset disposition (ITAD) operations are looking to process. ITAD generally covers computers, laptops and ancillary devices such as keyboards and mice. ERI’s version of ITAD accepts a wide variety of electronic devices for refurbishment and reuse from both the enterprise stream and the consumer stream, which includes tablets, gaming devices, speakers and more.

“We’re able to do the recycling, shredding, and refurbishment and reuse of all types of electronic devices and parts,” Dillon said.