The next tech wave at the MRF? 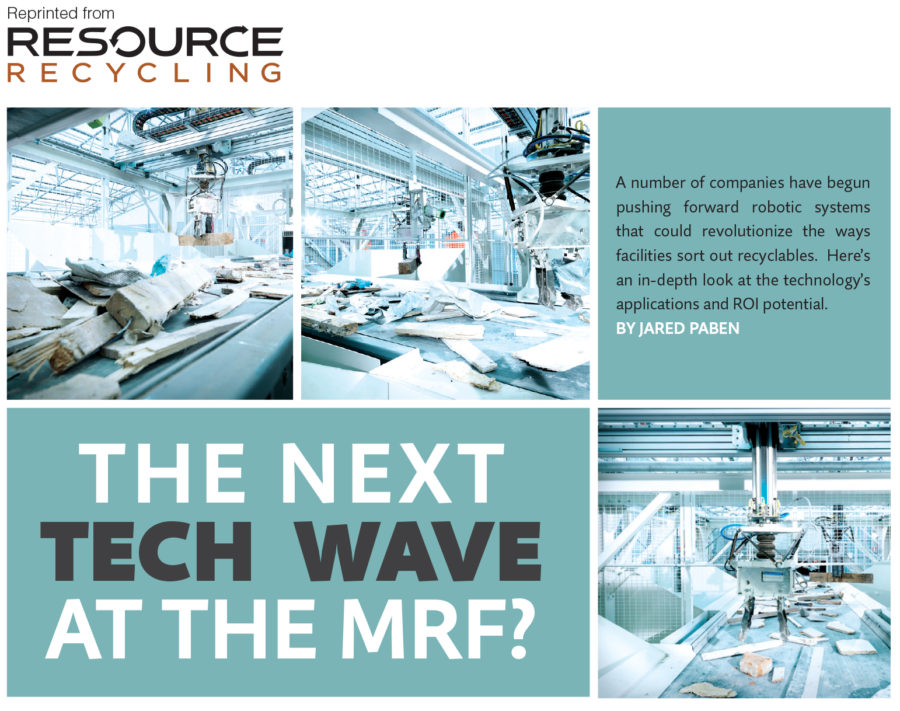 Computer software advancements have allowed intelligent robots to recognize their environments, enabling them to fly planes, drive cars and vacuum dirty carpets without human intervention. Why not put them to work in recycling facilities?

Robotics companies in Europe and North America are working on doing just that. What might have seemed far-fetched a few years ago – artificially intelligent computers recognizing items using grippers to snag them off a line – is today a reality in a handful of materials recovery facilities (MRFs) in Europe, Japan and the U.S. In addition, these machines are able to learn new material types, allowing them to potentially be important tools as MRFs adapt to the evolving ton.

And, mindful of the technology’s newness and the financial pinch MRFs are feeling, the companies are employing revenue-sharing and leasing models so MRFs can dip their toes in the AI water without breaking the bank.

Kerry Sandford, an equipment expert and co-founder of consulting firm RRS, has previously expressed a degree of skepticism about robotic systems, because he’s seen them fail in the past. But he acknowledges the robotic tide may be turning.

“In the long run,” he said, “the MRFs will probably be designed around the robots.”

So what specific offerings are companies in the robot space bringing to recycling operators?

ZenRobotics, a Helsinki, Finland-based company founded in 2007, has been an innovator when it comes to bringing robotic technology to materials recovery. The company’s system uses robotic arms suspended from a framework above conveyor belts. Each arm is equipped with a pincher to grab and toss material into chutes.

Barcelona, Spain-based Sadako Technologies also uses the suspended-arms approach on its Wall-B model, although the robots use suction, instead of grippers, to snag PET containers.

Other companies are producing equipment that fits into one of a pair of robotics categories: delta and SCARA. Delta robots look a bit like spiders standing on the ceiling and are capable of working at very high speeds. SCARA (selective compliance assembly robot arm) devices feature swiveling appendages akin to an X-ray camera one would see at a dentist’s office.

AMP Robotics, based in Boulder, Colo., plans to employ both approaches: delta devices for achieving the higher speeds necessary on fiber lines and SCARA robots for container lines, both using suction. 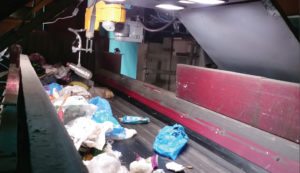 Sadako is also transitioning to the delta approach to generate more picks off the line.

What you see is what you pick

The biggest breakthrough in the recycling robot space has been the development of technology that allows machines to “see” different materials coming down the line and know precisely what is what.

“Probably the biggest thing this generation of robot people are bringing to us is improved recognition and software and the algorithm for doing that efficiently,” Sandford said.

Robotics companies say the same thing, though they add such software is difficult to create for recycling environments because materials are varied, smashed, dirty and jumbled together. Still, using visible-light cameras (sometimes alongside near-infrared ones), computers in the robots learn to recognize objects based on their size, shape, color and texture. As Sadako Technologies points out, the approach can allow robots to do what optical sorters can’t: tell the difference between different objects of the same material (for example, a PET thermoform and PET beverage container).

“This is like an extra sorting for the plant to be able to get the most value from the materials,” said Belén Garnica, the Sadako co-founder and head of business development and finance. 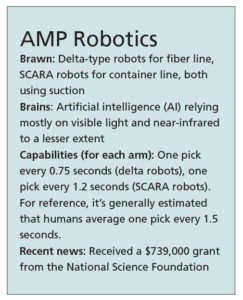 And the more these artificial intelligence systems see, the smarter they get.

“It’ll always improve with additional data,” said Matanya Horowitz, founder of AMP Robotics. “If there are new types of packaging, once we begin to flag those, it’ll begin to learn that new style of packaging without any hardware changes or tweaks.”

AMP Robotics has tested its visioning system on real-life container, fiber and e-scrap streams, Horowitz said. While the recognition function requires a tremendous amount of data, it is able to track highly specific material categories. Horowitz said the system could identify, for example, how many Starbucks cups came down the belt over a given time period.

ZenRobotics’ system uses its sensors to also help the computer determine how the unit should grab an item and how fast it should lift and toss it, something humans instinctively do when lifting heavy items versus lighter ones. The computer can even adjust the speed of the belt depending on the distribution of materials.

“Every day, the rate of recovery is getting better and better without us doing anything,” said Henry Eidenschink, the ZenRobotics sales director.

The Bollegraaf system uses a combination of near-infrared and height cameras to identify items by material and through 3-D detection, according to Van Dyk Recycling Solution, North American distributor of Bollegraaf equipment.

Finding a home for robots

So should MRFs be planning to lay off workers and remove machinery in favor of robots? Not quite. At this point, robots still have to find their place in line.

“I don’t think any of the robots are to the point of doing primary sorting on any high-throughput MRF operations,” Sandford said. “But they are, I think, to the point where they’re good for quality control on most products, at least up to a medium level of sorting toward the end of the container line.” 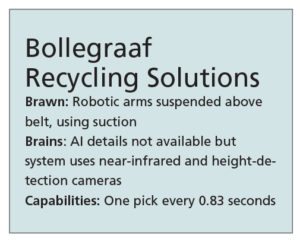 For one thing, robots simply cannot operate as fast as optical sorters, which are capable under some circumstances of one pick every 0.06 seconds, or 1,000 picks per minute. The fastest robots can make one pick every 0.75 seconds.

“[Robots are] not designed to manage the big amount of waste that today is being sorted by optical sorters,” said Garnica of Sadako in Spain. “Our solution is complementary to an optical sorter.”

That being said, both Garnica and Horowitz of AMP Robotics said their systems could replace the last optical sorter in a line, the one that’s particularly expensive given the lower volume of material it’s sorting. They also said robots could serve as quality control downstream from optical sorters.

Westminster, Colo.-based ML Environmental recently signed an agreement with ZenRobotics to become the exclusive distributor of the ZenRobotics Recycler in North America. Marcel Vallen, CEO of ML Environmental, calls the system “the next generation of smart optical sorters,” capable of sorting six different materials at once, including black plastics. It can pick from about 10 times more square footage than a human, he said. Also, in a C&D facility, the system can operate in dusty environments or those that might contain asbestos.

Horowitz added a robot would be less about replacing human labor and more about providing a baseline level of sorting capacity, which could be valuable if employees fail to show up to work.

Rolling out the technology

In Isaac Asimov’s “Robot” series of sci-fi books, the first law is a robot may not injure a human or allow a human to be harmed. The first law of recycling robots might be that a robot must make financial sense. 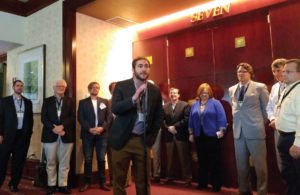 In Barcelona, Sadako is employing a revenue-sharing model through which a MRF and Sadako each get a portion of sales revenues of PET materials sorted by two Wall-B systems, Garnica said. The company has signed a contract to install a third one in Palma, on the Spanish island of Mallorca.

“We don’t really have a price because the product isn’t fully commercial-ready,” Garnica said. But the final purchase price will cost less than $100,000, she said.

ZenRobotics has deployed its robots to facilities in Finland, the Netherlands and Switzerland. This summer, the company will be working in France and Japan, said Eidenschink of ZenRobotics. In April, the company announced it sold three units to ML Environmental, which will keep one as a demonstration unit.

Instead of requiring $1 million purchases, the company will lease a ZenRobotics Recycler with two arms and software updates for $30,000 a month, Vallen of ML Environmental said.

Eidenschink acknowledged the difficulty of convincing U.S. recycling professionals of the system’s viability, in large part because it’s so new and there isn’t yet an operating unit on the continent.

“Once we have a unit here on the ground, it’s going to be much, much easier to convince the customer,” he said.

AMP Robotics is also interested in the subscription or leasing approach. 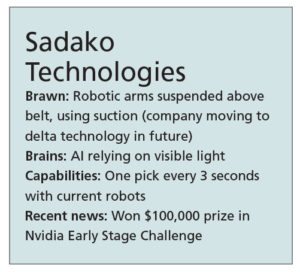 “We do think a subscription model is the most natural one,” Horowitz said. “We want to make it the easiest decision a MRF has to make.”

Earlier this year, AMP Robotics began testing a robot on a container line in a U.S. MRF, and the company is currently looking for other early-adopter partners willing to help it improve the product as it operates, Horowitz said. He predicted the company would offer monthly subscriptions by the end of 2016, although he didn’t have an estimate of the cost.

The leasing and revenue-sharing models could make it easier to gather and share knowledge gained by one robot with others in different facilities.

“These robotic systems, they do learn from experience and there’s a lot to gain by having a continued relationship between us and the MRF so we can continue to update this robot,” Horowitz said. 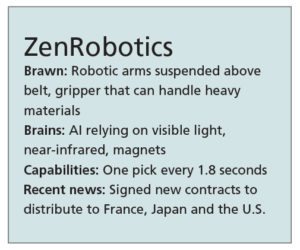 The companies in the robot space are moving full bore toward improving capabilities, deploying machinery and winning grant money.

ZenRobotics, which has been installing units in C&D facilities, has plans to conduct testing this year to refine its residential curbside container sorting capabilities, Vallen said.

“We have to do some groundwork and our own due diligence and convince owners of curbside recycling facilities that it’s working,” he said. “You can only introduce something new once.”

ML Environmental plans to unveil its demonstration unit at this year’s Waste Expo in Las Vegas.

With its limited resources, Sadako is still working to improve the Wall-B’s deep-learning and grabbing capabilities. Garnica said the company also plans to expand its recognition to HDPE items, followed by cartons and cans.

The company has invested more than $1 million into the Wall-B system to date, including clean technology startup money from the European public-private agency KIC InnoEnergy SE. Yet Sadako has generally struggled to find investors who aren’t risk averse, Garnica said.

“This has been maybe the most challenging thing in our company,” she said.

So the company was ecstatic to recently win a $100,000 prize from the Nvidia Early Stage Challenge, awarded at the GPU Technology Conference in April in San Jose, Calif. Garnica said the money would improve Sadako’s cash flow, accelerate Wall-B development and possibly help attract other investors.

AMP Robotics, meanwhile, recently received a large infusion of money at a time when it was badly needed, Horowitz said. In early April, the National Science Foundation (NSF) announced it was awarding the startup a $739,000 grant, the second phase of funding from NSF, which earlier provided $150,000. The new grant will provide enough funding to last two years, Horowitz said.

Sandford of RRS predicted the industry wouldn’t have to wait long to see where robotic sortation might end up in the recycling world.

“I think in the next year or so we’re going to see a lot more demonstrations that will help us decide how far and how fast it’s going to go,” he said.