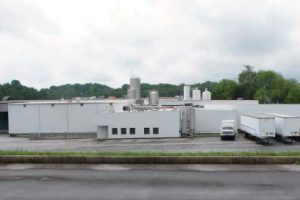 The Nulife property in Virginia is currently listed for sale.

Nulife Glass has removed all CRT materials from its shuttered Virginia site, which was the last of the company’s locations where leaded glass was being stored.

The CRT glass recycling company had already sent more than 16,000 tons of CRT glass from its storage sites to disposal, as reported by E-Scrap News in early 2018. That volume included material stored at Nulife’s facilities in Dunkirk, N.Y., in warehouses in Pennsylvania and some of the stock at a Bristol, Va. site.

At that time, some 5,000 tons of material remained in Bristol, but that glass has now been removed and sent for disposal as hazardous waste, according to local officials.

The cleanup was mentioned during a Bristol City Council meeting last week. All the materials inside the building “have been removed, and the state has been in the building, and confirmed with the [attorney general’s] office that it has been cleaned,” said City Attorney Randall Eads.

Nulife launched in the U.S. in 2013, with headquarters at its New York site. The company started up a glass furnace in 2016 and began processing 10 tons per day of CRT glass, separating the lead from glass and selling both materials.

Nulife began amassing significant CRT quantities at its New York site, a handful of storage facilities in Pennsylvania and at the Virginia location, which opened in 2015. Nulife’s leader, Simon Greer, said in 2016 such storage was necessary to ensure a steady feedstock for the furnace operation.

As of April 2017, Nulife was storing some 52 million pounds of CRT materials across all its locations.

The company had experienced difficulty meeting regulatory requirements since its launch, but a major hurdle came in mid-2017: Pennsylvania regulators ordered the company to remove the 17 million pounds of CRT materials it had stored at multiple warehouses in the state. The state Department of Environmental Protection found that the company was not in compliance with the federal CRT Rule, which requires a certain amount of CRT material to be recycled per year to prevent speculative accumulation.

Nulife was given a year to remove all the material. The company briefly worked to move all operations to its Virginia site as a way to keep the business alive. But that summer, the company suspended operations, and in September 2017, Greer announced Nulife would close altogether and give up on its U.S. operations.

The recent Bristol City Council discussion arose because the city was asked to release Nulife from a lien, pending repayment of grant funding the company received to begin operations.

Nulife in 2014 was provided $110,000 by the Virginia Economic Development Partnership. That balance was credited toward the company’s $190,000 purchase of property for its facility. When the company defaulted on the grant terms, city officials put a lien on the property.

The council voted 4-1 to release the lien, pending repayment of the $110,000 balance Nulife owes for the grant. The property is currently listed for sale.