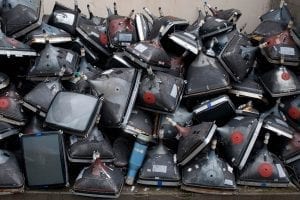 The Consumer Technology Association (CTA) has developed a program that would charge consumers a point-of-sale fee on new televisions and monitors. Money collected would be used to fund recycling efforts for problematic legacy devices. Federal elected leaders would need to pass and sign legislation into law to establish the program.

During a session at the Resource Recycling Conference last week, Walter Alcorn, vice president of environmental affairs and industry sustainability at CTA, said the program would target CRT devices. The advanced fee model is different from the extended producer responsibility (EPR) programs in place in many states, Alcorn said, describing those systems as producing “kind of a hidden tax” because producers are forced to internalize the costs of program management.

Further, Alcorn noted at the Resource Recycling Conference, customers in states without electronics recycling programs may be paying for OEMs’ recycling obligations in other states due to the higher costs of products.

“The idea is to make that visible, to have everybody across the country see that they’re actually paying for recycling whenever they’re buying a new television, a new computer monitor, and then make sure that folks across the country actually would be able to access those services,” Alcorn said.

CRTs were targeted because of the difficulties associated with recycling them. They are occasionally stockpiled and abandoned, leaving a mess for government agencies and landlords to clean up.

“Typically what happens is a recycler gets in over their head and then walks away from the site and leaves a warehouse full of old gaylords of CRT televisions and monitors,” Alcorn explained. “That continues to be an issue.”

The stockpiling problem creates expensive cleanups. But proper recycling of CRT devices is an expensive process as well. CTA has been looking into how it could tax consumer electronics products to pay for recycling costs, Alcorn said. But in the U.S., there aren’t very many ways that industry can tax itself legally, he noted.

“As a matter of fact, typically we’re restricted from doing that by antitrust laws. It’s called collusion and price fixing,” Alcorn said. The industry can’t go out and say it’s going to raise the price of everybody’s TVs by $10, for example. “We just can’t do that.”

So the consumer electronics industry has put together a proposal that mirrors the U.S. Department of Agriculture’s “checkoff” programs. These programs collect fees from all producers of a specific commodity product. The collected funds are used to research and promote that product generally, without referencing individual brands. The goal is for each company to contribute to an effort that benefits them all. The “Got Milk” ad campaign was funded in this manner.

Under the CTA proposal, in any state that does not already have an advanced recycling fee on monitors and TVs – in other words, any state other than California – this program would charge a point-of-sale fee of $10 or less per unit. That fee, Alcorn explained, “would go to paying for the recycling of the old technology televisions and computer monitors.”

The money could be routed through the Department of Commerce, Alcorn said. Once collected, the funds would go to pay for recycling service providers, including processors and collectors.

“The idea, also, is to help take care of those abandoned warehouses of CRTs and other places where CRTs have been dumped and abandoned,” Alcorn noted, although he stressed that this effort would secure financing, but would not be a regulatory activity. Regulations would still be up to state laws and the U.S. EPA’s Resource Conservation and Recovery Act (RCRA).

Furthermore, although the funds could go toward cleanups, this wouldn’t relieve any financial or cleanup liability on the recycling company for stockpiling. And the funding program would not change anything about RCRA, the Comprehensive Environmental Response, Compensation, and Liability Act (CERCLA, also called Superfund law) or any state cleanup liability laws.

CTA is actively proposing the fee concept to lawmakers on Capitol Hill, Alcorn said, noting that a program as big as this can’t be done without a law. It’s moving into the lobbying stage currently.

“So, we’ll see,” he said to applause in the room at the Resource Recycling Conference. “I mean, you’ve got to try. If you don’t try, it’s never going to happen.”

Alcorn said the CTA thinks the proposal has a shot at passing, although he noted it might be a long shot.

As CTA is proposing it, the program would go on for seven years. The manufacturers of the products would start the program and could end it early if it’s not working as planned. A multi-stakeholder board would oversee the program, determining fee amounts, standards for recycling operators receiving the funding and distributions of money.