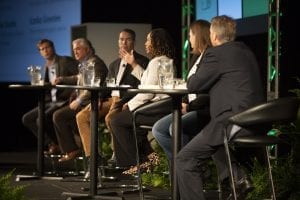 A panel of experts discusses contamination during a plenary session at the 2018 Resource Recycling Conference.

Industry stakeholders from around the nation convened in St. Louis last week for the 2018 Resource Recycling Conference, where the hottest topics in materials recovery received attention over two days of educational sessions.

The following is a roundup of some of the top pieces of insight shared on stage.

Zeroing in on a clean stream: Contamination in recycling programs was a recurring theme throughout the conference, and one session focused specifically on tips to help create a cleaner curbside stream.

One of those key tools is cart inspection and tagging, explained Cody Marshall, vice president of technical assistance for The Recycling Partnership, the industry group that organized the session.

The decisions in the field aren’t always easy, Marshall said. The enforcement officer has to be quick on the inspection route to cover as much ground as possible. And the inspector also has to think about customer complaints, the program’s relationship with its hauler and MRF, and more.

“It’s complicated, so how picky do you want to be? That’s a conversation you must have,” Marshall explained.

Marshall described his experiences managing a curbside recycling program, noting that the biggest complaints he received were related to inconsistency: A material that was accepted without issue one week would be flagged as a contaminant the next week, or households would get tags very infrequently.

“We’re saying, continuous feedback and engagement with your residents is one of the tools to solve this issue of contamination at the curb,” Marshall said. 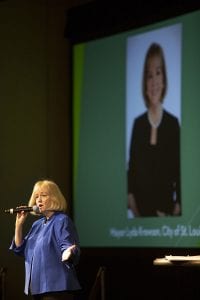 Abernathy’s position operating Busch Stadium for the Cardinals means he’s responsible for cleanup at the stadium, and he described how the facility’s recycling efforts have progressed over the years.

But Abernathy also pushed for a stronger connection between professional sports teams and recycling efforts nationwide.

“What if every team could demonstrate environmental stewardship and things like recycling, and prove that they can work – how many people could we educate and influence?” Abernathy said, recalling a speech he heard from Allen Hershkowitz of the Natural Resource Defense Council.  “We can help get your message across to [fans], to help them understand that recycling is so important to the survival of the planet, and so important to do right,” he said.

Breaking down the glass landscape: Elsewhere at the conference, three glass stakeholders representing the processing and end market sectors held a frank discussion highlighting the realities of the glass industry today.

Laura Hennemann, vice president of marketing and communications for Strategic Materials, sought to debunk what she described as a number of myths about glass recycling. Among other clarifications, she explained that broken glass is accepted for recycling, that glass has not been hit by China’s policies, that there are strong end markets for glass, and that labels and organics present no problem for recycling glass.

Hennemann also noted that glass is often unfairly singled out as a contaminant in the recycling system.

“Basically, in single-stream recycling, every type of material contaminates each other,” Hennemann said, adding that the processing stage is the key to recovering value from each material in the stream.

Her viewpoint was shared by Jim Nordmeyer, vice president of global sustainability for O-I, a major bottle manufacturer that uses recycled cullet. Nordmeyer expanded on the current state of glass recovery in North America.

Demand for glass is about 11 million tons per year in the U.S., he said. Between all glass processors nationwide, Nordmeyer estimated there are roughly 5 million tons being processed each year, with the remainder going to disposal. That means there is room for higher recycled content usage, he said.

“Brands are asking for it, we believe in it, but I’ll stress one more time: It has to make sense for the entire value chain,” Nordmeyer said.

George Valiotis, CEO of Pace Glass, described the ambitious plans for a large Pace facility in New Jersey that is currently under construction. He explained some of the factors that led his team to launch the massive facility, as well as to announce plans to build four more similar sized plants in the future.

“Pace Glass got into this business because we strongly believe that … companies like O-I, Ardagh and Anchor Glass all would probably take twice as much cullet if they had an adequate supply in the U.S.,” Valiotis said.

But while there is strong demand, the supply is suffering, he said. Pace aims to fill a void in the Northeast, where the company anticipates it will have the capacity to process all of the MRF glass in the entire region.

By the numbers: Metrics and data have been growing topics of focus in the industry of late, and they were well covered at the Resource Recycling Conference. On Oct. 22, the latest installment of the “Measurement Matters” workshop series was held at the conference. Then, in a session titled “Driven by Data,” a group of experts delved into the latest topics in materials recovery metrics.

Lisa Skumatz, principal at consulting firm SERA, described a plethora of recycling metrics and noted the strengths of each. The biggest problem with the current common metrics, she said, is what they don’t measure.

She advocated for a metric she calls “percent recoverables remaining,” which highlights the material that’s still thrown away but is recyclable. This method, which requires a waste composition study, tells the recycling program what to do next.

Also in that session, Dale Gubbels, CEO of Firstar Fiber Corporation, talked about how data and metrics helped his MRF decide to roll out the Hefty EnergyBag program full-time. Firstar, located in Omaha, Neb., was the first MRF to begin employing the program on an ongoing basis.

The EnergyBag program provides residents with distinctive bags to collect plastics that aren’t accepted in their curbside recycling program. The bags are collected with the curbside carts and taken to the MRF, where they are removed by hand from the sort line. The program has been trialed in several communities around the country.

Before adopting it completely, Firstar examined a study carried out in the city of Bellevue, Neb., where consultants did a pre-sort and presented data showing that the material being targeted by the EnergyBag program made up 5.8 percent of the recycling stream, despite not being accepted by the program.

“That was an indication that we had that stuff anyway,” Gubbels said.