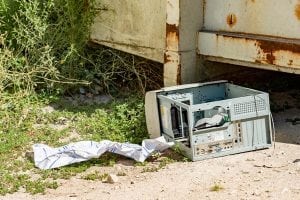 Device scavenging is hampering formalized electronics recycling efforts in Europe, and a new study concludes there is little established processors can do to stop it.

But companies can take steps to reduce its impact on their operations, according to research from the European Electronics Recyclers Association (EERA) and United Nations University.

The groups on Sept. 3 released “WEEE Recycling Economics,” a study detailing shortcomings in the electronics and electrical appliances recycling industry in Europe. Device scavenging was listed as one of the top problems.

Scavenging can refer to the theft of either entire devices, or stripping out components before the device makes it into the formal recycling operation. This has both environmental and economic consequences, the study notes, because scavengers generally target the more valuable components.

Informal processors who scavenge devices have far fewer costs associated with their operations, so their profit “exceeds the normal economic margins of legitimate recyclers” who properly handle end-of-life devices in compliance with the law. “This means that unfair competition by non-compliant recyclers is seriously disrupting the WEEE recycling market and is, together with illegal export, the main reason for an unfair (and) unlevelled playing field in the EU.”

“The result is damage to the environment and the partial loss of important raw materials which implicates directly a loss of income for the compliant WEEE recycling industry,” according to EERA.

Based on the volume of components scavenged in 2016, the study calculates that losses were valued at roughly 170 million euros ($198 million) that year. The top harvested e-scrap components included cables, hard drives, circuit boards, batteries and more.

The report notes that the issue is “a serious problem which is often beyond the control of compliance schemes and recyclers,” but that building a consideration for its effects into contracts can help offset the negative financial impact.

The problem is not unique to Europe; it has plagued legitimate recycling companies on multiple continents. E-Scrap News previously reported on the economic challenges informal recycling operators create for compliant companies in Mexico and India.