A look at e-scrap issues and opportunities in Mexico 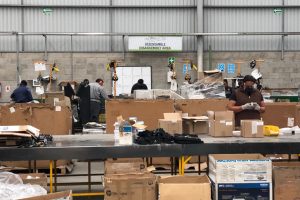 The processing line at Proambi’s facility in Mexico, photo courtesy of Salvador Río

Mexico may be America’s neighbor to the south, but in some ways, the e-scrap ecosystems in the two nations are worlds apart. And perhaps the biggest difference is the fact that in Mexico, an informal system of electronics collection and processing is well-established.

Although formal recycling companies can differentiate themselves to clients through certifications and data security assurances, those processors are still pinched on pricing because lots of materials falls into unregulated hands.

“Competing against the informal sector is a headache,” acknowledged Salvador Álvarez Río, CEO of Proambi, a Lerma, Mexico-based company holding R2 and other certifications. “The problem is it represents a very large percentage of the e-scrap in Mexico, the way it’s handled.”

In an interview with E-Scrap News, Río expanded on how the informal sector is straining further development of the industry and also offered details on the wider e-scrap evolution in the country of 127.5 million.

Getting a clear understanding of what’s working and what isn’t in Mexico is an important step for U.S. e-scrap stakeholders who want to keep pace as electronics recovery becomes more of a global venture.

Developing nations hold major opportunities in terms of access to material and multinational enterprise contracts. But as is becoming increasingly clear in different corners of the globe, major questions remain about the best way to set up recovery systems, especially when an informal economy for end-of-life electronics already exists.

Proambi, Río’s 10-year-old company, is located about 30 miles west of Mexico City and offers a variety of end-of-life electronics services.

Several years after its launch, it began securing certain permits and certifications, and it now holds the ISO, OHSAS and R2 certifications.

“We’re one of the very few in Mexico that are R2 certified, which has given us a good advantage in some regards,” Río said. “It makes us much more attractive particularly to large international corporations, which are the ones most worried about compliance and sustainability issues.”

The company, which relies mainly on enterprise accounts, provides end-of-life disposal, data erasure, hard drive shredding, degaussing, and also recovers and refurbishes devices. About six months ago, Proambi started a retail chain where its refurbished items can be sold directly to the consumer.

Proambi also operates a recycling program with Best Buy, where consumers can drop off devices for recycling.

On average, the company processes around 45 to 50 tons a month, Río said.

Proambi receives some material directly from consumers, both through a drop-off program on-site at the processing facility, and through special events. Gathering everything at a designated recycling event “makes it easier for us to send one of our trucks and really take a lot of material from just one source,” Río said. That allows the company to recycle some domestic material, despite a lack of collection infrastructure.

There is also little regulation guiding how e-scrap is managed in Mexico, he added. Some companies are required to work with recycling operators to handle the material they generate in the country, which is where some of Proambi’s contracts come from.

But for material generated by residents and companies less focused on downstream due diligence, the informal sector reigns supreme.

As is common in many other countries, individuals on the informal side are able to make ends meet through small-scale electronics recovery by focusing only on the components they can sell at a profit.

“They’ll take whatever is of value, and throw into the garbage what doesn’t work,” he said, offering as an example the CRT, which is a common item targeted by informal recycling outfits. “You take the yoke, which is basically copper, you take that off and then they throw away the CRT, the glass, into the garbage or to a disposition site [that] is not official.”

To illustrate why it’s hard for his certified company to compete with that type of process, Río explained Proambi workers disassemble the CRT and then package and ship it to a specialized company that charges a fee for proper recycling of the glass and other materials.

Still, Río said the country should not be looking to stamp out the individuals engaged in informal recycling. For one thing, those unregulated operators currently handle so much material that if they suddenly disappeared, “we would just drown in electronics.”

He added there are actions that could be taken by those in the formal industry as well as by their customers and government agencies that would shift those small-scale operators into the formal system and benefit electronics recycling nationwide.

“I’m a believer that we do not need to end the informal people, but rather [end] the informality,” Río said.

A more organized approach could, for example, open up additional downstream options, such as smelters, within Mexico’s borders. Currently, no smelters for e-scrap material exist in Mexico, Río said.

Most of the formal processors send their material to the U.S., which is what Proambi does, or to Europe or Japan. On the informal collection side, the material is often sent to China, Río said.

If a better system of collecting and processing material was established, stakeholders would be better able to make projections about tonnages and then direct recovered-e-scrap to waiting outlets.

“There is so much informal recycling in the country, that it would not be very easy to install something and really be sure to have the critical mass to start a larger business smelting the boards,” Río said.

If a smelter was located in Mexico, Río sees a viable business prospect in which the facility could act as a hub, bringing in e-scrap from all over Central America and some South American companies as well.

“If they are forced to go to a recycling company such as ours with certifications and everything by the book, then eventually probably there will be people willing to invest in smelting,” he said.