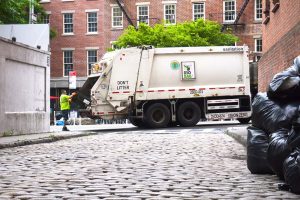 Used electronics generally make up a small fraction of any city’s garbage weight, which is usually heavy on food scraps and other materials. But city officials called out electronics because of the hazardous substances they contain. They noted that improperly disposed e-scrap has decreased by 60 percent over the past four years.

What the numbers showed

DSNY broke down which categories of devices made up the 2017 number. Of the total sampled last year, 44 percent was audio/visual equipment and cell phones, 41 percent was other computer equipment, 9 percent was computer monitors, and 6 percent was TVs.

The auditing was done in partnership with the city’s recycling vendor, Sims Municipal Recycling,  and it was conducted by Mid-Atlantic Solid Waste Consultants (MSW Consultants).

A host of programs

DSNY’s reported attributed the decreases to the success of electronics collection and recycling programs. In 2010, statewide legislation to create a manufacturer-funded electronics recycling program was signed into law. The law took full effect in April 2011. Starting in 2015, disposal of certain types of electronics equipment became illegal statewide. In the first couple of years of the program, New York City reported a significant under-collection of material, according to a report from state regulators. They noted that housing and transportation in the city of more than 8 million people make convenient collection difficult.

E-scrap processor ERI, which recycles electronics collected through city programs, issued a press release on May 15 touting the success of the programs. It noted that 3.1 million New Yorkers are now served by the ecycleNYC and curbside programs.

“It is particularly rewarding to be able to offer NYC residents a suite of programs, such as ecycleNYC and the curbside pickup program, which are advancements that make responsible, effective recycling of electronic waste convenient for millions,” John Shegerian, chairman and CEO of ERI, stated in the release. “To have played such a distinct role in diverting 60 percent more e-waste away from the trash compared to only a couple years ago is a humbling and rewarding experience.”