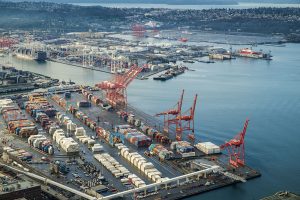 No longer receiving material from state electronics recycling programs in Washington and Oregon, processor Total Reclaim is attempting to weather recent regulatory hurdles and set its sights on future growth.

Since September 2016, the Seattle-based firm has received just over $675,000 in fines from Washington and Oregon regulators, but founder and owner Craig Lorch said the company is committing to staying the course.

“Total Reclaim built our reputation as a leading innovative recycling company managing numerous different material streams over the course of 26 years and will do our best to do so in the future,” Lorch said. “While we have had our challenges, we have been fortunate to work with talented employees and great customers who have supported us in the past and continue to support us today.”

The company was founded in 1991 and had been a longtime processor of material from the Pacific Northwest and elsewhere in the country. In September 2016, Washington regulators fined Total Reclaim a total of $444,000 for exporting e-scrap. And in October 2017, the company received a fine of $67,500 for allegedly speculatively accumulating mercury-containing flat panels in Seattle.

In April 2017, Total Reclaim was fined $164,400 by Oregon regulators, who said the company exported mercury- and lead-containing flat-screen devices to China.

One challenge Total Reclaim has faced in the aftermath of its fines is the loss of key recycling and OEM partners.

Following its second fine from Washington regulators in October, Total Reclaim lost access to material from Washington’s extended producer responsibility program, E-Scrap News has learned. According to Andrew Wineke, spokesman for the Washington State Department of Ecology, manufacturers decided to cut ties with the company this year.

“The company was not suspended from the E-Cycle program, but, beginning this year, the Washington Materials Management and Financing Authority chose not to continue to contract with Total Reclaim for processing e-waste,” Wineke stated.

The Washington Materials Management and Financing Authority (WMMFA) did not return an E-Scrap News request for comment.

The Washington Legislature is considering a law, House Bill 1824, that would impose a “three-year block for transporters, collectors, or processors who are determined to have willfully violated the program requirements,” according to the Institute of Scrap Recycling Industries (ISRI). The state House of Representatives approved the bill on Feb. 8 in a vote of 53-45. A Senate committee held a hearing on it on Feb. 21.

In Oregon, since receiving its April 2017 fine from the Oregon Department of Environmental Quality (DEQ), Total Reclaim is no longer working with recyclers in the program. According to Blake Bennett, Oregon E-Cycles program coordinator, the company is not being used as a downstream processor for companies active in the program.

“Since none of the recycling programs have proposed using Total Reclaim, DEQ has not determined whether Total Reclaim could be approved as an E-Cycles processor,” Bennett stated.

“If all used flat-panel televisions and monitors are subject to hazardous waste storage, labeling, manifesting, and transportation requirements, countless other recyclers and transporters are guilty of exactly the same infraction we have been accused of, yet there has been no discussion of this in the media and, to our knowledge, no enforcements or penalties of this type elsewhere in the country,” Lorch said.

While the loss of state program material has been a blow, Lorch said Total Reclaim is still on track to eclipse the 20 million pounds of material the company recycled in 2017.

“Although material streams, downstream markets, and commodity prices evolve and change, our approach to the work has not,” Lorch said. “We will continue to develop new strategies for new materials, recognize and address our past challenges, and celebrate our continued successes. We believe we have a responsibility to our employees, our customers, and ourselves as owners to continue our efforts to be leaders in the world of recycling.”