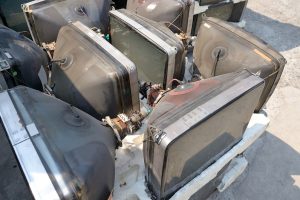 Property owners spent millions of dollars cleaning up CRT storage sites left behind by Creative Recycling Systems. But E-Scrap News has learned much of the glass went to companies that ultimately failed and abandoned stockpiles of their own.

State records indicate most of the material was sent to a handful of downstream processors: Ohio-based Closed Loop Refining and Recovery, Kentucky-based Global Environmental Services (GES) and Illinois-based Kuusakoski Recycling.

Closed Loop and GES received more than half of Creative’s stockpile and have since closed, leaving behind millions of pounds of their own CRT glass.  Both firms have been the subject of lawsuits and regulatory action.

Creative’s CEO and founder, Jon Yob, did not respond to an E-Scrap News request for comment.

In December 2014, state officials in Maryland confirmed that 7.8 million pounds of material had been removed from Creative’s former Elkridge, Md. processing site and sent to GES in Kentucky, said Jay Apperson, a spokesman for the Maryland Department of Environment’s Office of Communication.

While the GES Georgetown, Ky. site has been largely cleaned out, a facility in Cynthiana, Ky. has an estimated 1.8 million pounds of CRT material in gaylords, Maybrier said. A third site, in Winchester, Ky., also contains some unprocessed material, including whole CRT units. “We haven’t really gone in there and given a total assessment of what’s in there,” Maybrier said.

Closed Loop closed in 2016 and left behind more than 200 million pounds of CRT glass in Arizona and Ohio. The company has faced a multitude of legal consequences as a result of its abandonment of material. It lost an $18 million lawsuit in Ohio and was sued earlier this month by an insurance company in Arizona, court records show.

Most of the rest of the material from Creative’s locations made its way to Kuusakoski. Kuusakoski received 8.3 million pounds from two Creative sites in Florida and another in Illinois, officials from those two states confirmed.

Finally, officials in South Carolina confirmed that 6.7 million pounds of material had been removed from Creative’s former site in Blythewood, S.C.  The state said it was not aware of where the property owner sent the material downstream.

Property owners on the hook

At the time of Creative’s collapse several years ago, it was not initially clear who would foot the bill for the cleanup. That changed, however, when a bankruptcy court approved an order in November 2014 that transferred ownership of the company’s assets, including 32 million pounds of costly material, to the owners of the buildings where the material was sitting.

“They did not know that not only was the stuff not worth anything, it was a massive liability,” said Jerry McHale, the former trustee appointed to oversee the liquidation of Creative’s assets.

McHale, who has worked as a bankruptcy trustee for over 40 years, said the Creative case was “probably the worst job I’ve ever had.” He estimated the cleanup costs incurred by the property owners in six different states totaled $2 million to $3 million. He confirmed that Creative played no role in the cleanup effort.

Property owners attached to various Creative sites did not respond to requests for comment from E-Scrap News.

“They did make some money on the higher-value stuff … and they sold some used equipment legitimately,” McHale said. “But it was nowhere near the operating costs once you consider the problematic materials.”

Court records indicate Creative did manage to get an $18.7 million lawsuit from Regions Bank thrown out due to the bankruptcy proceedings, which concluded in August 2016.