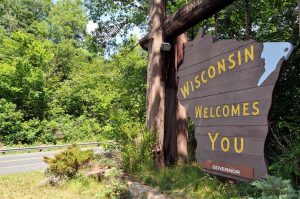 Regulators in a Midwest state say the fundamental elements of its producer responsibility law remain sound, but industry-wide challenges are straining the program. In an annual report, Wisconsin state officials quantify these challenges and offer some potential fixes.

Collectors took in about 31.3 million pounds of electronic devices from July 2016 through June 2017, which is down about 8 million pounds from the peak year of 2011-12, according to the E-Cycle Wisconsin report. It was down 3.4 percent year over year. Part of the trend is due to product lightweighting and fewer CRTs entering the end-of-life stream, the report notes.

But collection targets have also decreased substantially since that peak year, from 32 million pounds down to the most recent year’s target of 22.8 million pounds.

A handful of OEMs have voluntarily paid to collect and recycle more than they are statutorily required to, according to the report, which was authored by the Department of Natural Resources (DNR). But that still hasn’t kept up with the amount taken in by collectors: During the most recent program year, nearly 7.5 million pounds of devices were collected and recycled without manufacturer funding.

The state calculates its collection targets based on the weight of new products sold onto the market the year before. As new devices get lighter, the targets have decreased accordingly.

The department anticipates a growing shortfall of OEM cash to cover recycling costs, unless the law is changed or OEMs voluntarily pay for management of more material.

In the meantime, the shortfall is having negative impacts.

”The DNR has seen several cases in the last three years of irresponsible recycling,” the report states. “These cases threaten the environment and are driven in part by the higher costs for responsible recycling. These trends are increasing the costs shouldered by taxpayers to either collect electronics or clean up dumped devices.”

During the 2016-17 year, collector registrations fell to their lowest level yet, down 25 percent since 2013. The DNR notes this may reflect the more challenging economics for electronics recycling in recent years. Processor registrations were also down, according to the report, continuing a trend fueled in part by economic challenges.

Some states facing similar predicaments have updated their e-scrap program legislation to account for the shifting product trends within electronics manufacturing. Those include Illinois, New Jersey and Rhode Island. Pennsylvania has also pondered shifts to its program.

The DNR floats the idea of basing collection targets on the weight collected for recycling the previous year, rather than the weight of new products sold onto the market.

Definitions could also benefit from updates, according to the report. The department has had trouble with certain “gray area” items including smartphones, digital picture frames, photo printers, portable DVD players and video game consoles. The language that defines covered devices could be changed to be more specific, for example, adding a definition of a computer by the size of its screen. The program could also be expanded to explicitly include the gray area items.

The DNR also advises changing how the program incentivizes OEMs to provide collection opportunities in rural areas, where volumes are generally lower. Currently, manufacturers receive a credit of 1.25 pounds for every 1 pound that’s collected in a rural county. But OEMs are easily hitting their targets each year, giving little incentive to take advantage of the rural allowance.

One of those is consolidating materials to form larger loads, which would improve the economics for collectors and processors. But consolidation of collection points is often at odds with providing convenient recycling access to the public. Instead, the report notes that collectors could work with each other to consolidate materials collected at each site before sending them to a registered recycling contractor.