One Northeast state OKs changes to its e-scrap law 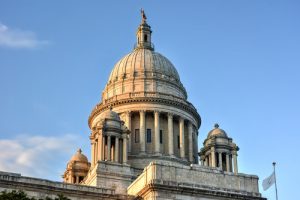 First passed in 2009 and updated in 2013, the Ocean State’s extended producer responsibility legislation requires manufacturers to fund the collection and recycling of computers, monitors, TVs and several additional electronic devices at end of life.

Similar to a number of other states with EPR programs for electronics, Rhode Island’s program has had problems with manufacturer targets not keeping up with the actual amount of covered electronics entering the waste stream. In years past, that has led collection sites to shut down mid-year without funding. State officials set manufacturer collection targets each year but have had trouble setting targets in recent years due to a lack of reliable data.

Senate Bill 888, which took effect when the bill was signed into law earlier this month, expands the “covered device” categories, specifying tablets are included and creating a pathway to add printers into the state program.

Printers will be added to the list of covered devices if, starting in 2020, they grow to 20 percent or more of the total returns of covered electronics. According to the National Center for Electronics Recycling (NCER), printers are a growing portion of the return stream in other states with similar covered product scopes. In Oregon, printers now make up 10 to 15 percent of the weight collected, according to NCER.

The legislation slightly relaxes the requirements for manufacturers managing independent plans, which can now be renewed for two years instead of annually. It creates a new allowance for manufacturers to come in either 10 percent under or over their weight-based collection and recycling targets. They can then carry those deficits or credits over to the next year.

The bill also creates a new requirement that TV manufacturers with a market share of less than 5 percent must participate in the state-operated program, billed at $0.30 per pound for the 2018 program year. Previously, they could manage an independent program instead.

The bill allows TVs to be counted as orphan waste if their manufacturer has gone out of business or cannot be identified. The orphan category is also expanded to include products from brands that make up less than 1 percent of the return share. Many returns fall into this category, according to NCER.

According to the state Department of Environmental Management, the new law also requires that manufacturers submit quarterly reports providing information on the progress of their plan. The state recently published manufacturers’ collection shares for the 2018 program year.

Product Stewardship Institute (PSI), a national nonprofit group that promotes extended producer responsibility (EPR) legislation, expressed dismay that printers were not added outright but said the expansion of covered devices is a step in the right direction.

“A broad product scope not only increases the amount of e-waste collected but also usually improves the quality of collected recyclables to reduce program costs,” said Sarah Bonelli, associate for policy and programs at PSI.

In a statement, Bonelli told E-Scrap News the 10 percent allowance provisions will provide more stability to OEMs running their own plans.

“Manufacturers must collect a predetermined number of pounds each year, and this frees them from the confines of the annual calendar while still meeting the requirements,” she said.

According to PSI, 12 percent of OEMs were participating in the state plan before this legislation, with the rest managing their own individual plan or joining a manufacturers’ collective plan.

Overall, Bonelli said the bill improves the state program and makes changes that are in line with PSI’s “Elements of a Stable Electronics Program” guidelines.

The quasi-governmental Rhode Island Resource Recovery Corporation (RIRRC), which works in concert with the Rhode Island Department of Environmental Management to run the state program, said the bill improves the program particularly by expanding the definition of “covered devices.”

“The legislation provides the resources needed so that the original intent of the law — that manufacturers, and not Resource Recovery, are wholly responsible for the cost of the program — is met,” RIRRC said in a statement. “We believe these changes will reduce operating losses for Resource Recovery while still providing convenient and responsible recycling of electronic waste for Rhode Island residents.”

“The law should focus on products that need help to be recycled and should not include products which the market currently takes care of on its own,” Alcorn wrote.