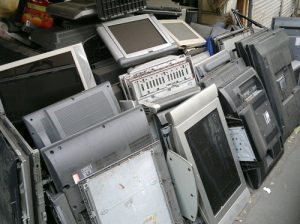 An automated LCD disassembly machine is gearing up to be presented to the public after several years in development.

The Trumaster-ALR can process up to 80 LCD units per hour, separating the LCD shell, mercury-containing CCFL tubes and flat-panel display.

LCDs have been a growing portion of the waste stream for the past few years, as more of the devices reach end of life. The Trumaster-ALR handles a stream that’s currently disassembled manually or sent into an advanced shredder. Automated disassembly is attractive for its speed and valuable output.

Next week, the Trumaster-ALR will be presented publicly for the first time at the Dublin facilities of Allied Automation, a partner in the European Commission-funded Revolv Project, which aims to push the technology into the marketplace.

Lisa O’Donoghue of Votechnik, which is manufacturing the equipment, said the machine being demonstrated is the scaled-up and market-ready version of the technology, and Votechnik will be in a position to take sales orders.

The ultimate goal is “to correctly position the technology in the marketplace leading to full scale commercialisation,” according to a project summary.

The equipment has been in research and development since 2009, when it began as a collaboration between the Irish Environmental Protection Agency, recycling companies, the University of Limerick and others. The research resulted in ALR Innovations, a company led by O’Donoghue that is developing a prototype machine.

ALR Innovations evolved into Votechnik, which is now the lead coordinator on the Revolv Project. The effort is co-financed by the European Union’s Eco-Innovation Programme, which put up half the total budget of more than 1.5 million euros ($1.7 million).

The project has particular interest to the European Union due to its potential to help recycling companies comply with EU regulations on the management of scrap electronics and appliances and the hazardous substances in those devices. But the equipment will be marketed internationally as well, including to North American recycling companies.

“We have a lot of interest from the USA and Canada and are already in discussion with USA and Canadian recyclers who are going to be viewing the technology over the summer period,” O’Donoghue told E-Scrap News.

The Trumaster-ALR essentially performs the same task as a human manually disassembling an LCD, but at a faster pace. During a 2011 presentation in Ireland, O’Donoghue said the machine works with any variety of LCD screens.

“We’ve identified, basically, a location inside the unit where we can make incisions, take out key components but keep the entire LCD structurally intact,” O’Donoghue said. “So if we can keep it intact, we can move it through to the next station with certain components removed, and then what we can do is actually break out the hazardous materials. So you get (the) LCD unit out of our machine with all the hazardous materials removed.”

The machine has “stations” for LCD removal, diffuser removal and CCFL removal, according to an equipment brochure.

A recent presentation on the Revolv Project noted the equipment could allow for a high rate of indium recovery because the LCD panel is removed intact.

As CRT volumes begins to drop is some jurisdictions, LCDs are slowly filling the void as the next problematic device.

“The difficulty of LCD disassembly combined with high costs has led to a situation of stockpiling of LCDs at recycling facilities across Europe,” according to the Revolv project.

One U.S. company that emerged as an early large-scale processor of flat-panel displays filed for bankruptcy in 2015, noting the waste stream was still dominated by CRTs and the company was likely too early in the LCD recycling game. But with an estimated lifetime of 10 years for flat-panel displays, more and more are recycled every year.

There have been several forays into automated LCD separation, including a process developed by the U.K.-based Electrical Waste Recycling Group, which boasted a throughput of up to 600 LCDs per hour using its in-house mechanical equipment.