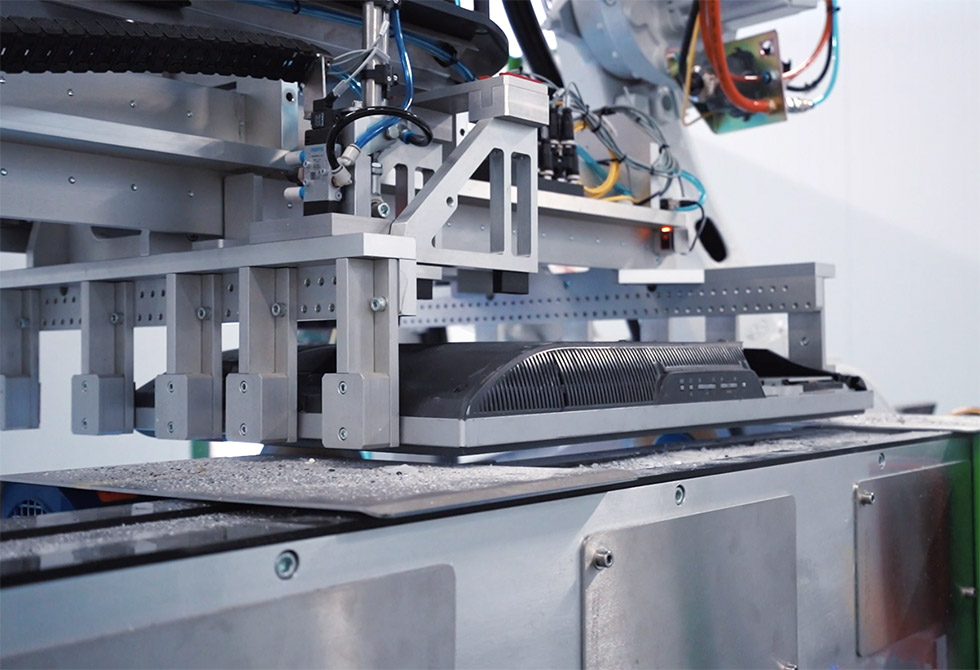 The FPD Pro dismantling robot at work in file photo from 2019. | Courtesy of FPD Recycling

The company is installing at its State College, Pa. facility the FPD PRO, which uses artificial intelligence and robotics to automatically disassemble TVs, monitors and laptop screens, securing hazardous components such as mercury-bearing lamps.

The system is the product of years of R&D from Irish tech company FPD Recycling.

Flat panels are fairly labor intensive to dismantle, and their net commodity values are limited. They’re also made of components with toxic metals, such as mercury, cadmium and lead, that can be released if shredded or broken during manual disassembly.

“Because of the hazardous elements involved and the extensive manual labor required, the current method of disassembling FPDs for recycling purposes is inefficient, costly and potentially harmful to the worker,” Ned Eldridge, eLoop’s CEO and founder, stated in a press release. “Improved productivity with the FPD PRO will allow us to provide this low-cost solution to recyclers so that they no longer have to expose their workers to hazardous elements in manually disassembling flat screens.”

Eldridge estimated a worker can disassemble about four flat screens an hour, and FPD Pro can break down about 90 an hour.

“This is a game changing breakthrough,” he said.

According to FPD Recycling, which has an office in Lakewood, Colo., this is the first unit to be installed in the U.S. The equipment is expected to be operational during the fourth quarter of this year.

An information sheet provided by FPD Recycling notes eLoop is paying as the system is used, instead of shelling out a lump sum for a large capital equipment investment. FPD said that, to make the system available to small- and medium-sized recycling companies, the technology provider is charging a flat annual fee supplemented by a per-screen fee for each unit processed above a set threshold.

“This finance model does two things,” Paudy O’Brien, CEO of FPD Recycling, stated in the information sheet. “It allows for effective, high-value recycling, but it also removes barriers to entry for the recycler.”

Founded in 2018, FPD has been refining the e-scrap “depolluting” technology for years. The system at eLoop is the third iteration of the technology, which was developed in collaboration with global robotic equipment supplier ABB Robotics. During testing, FPD Recycling processed nearly 400,000 screens.

The system is networked with other similar installations via the cloud, allowing it to continually learn and improve its performance, according to FPD Recycling.

ELoop has e-Stewards-certified locations in Export, Pa., its headquarters location near Pittsburgh, and in State College. The company is a subcontractor for the Pennsylvania Resources Council, which recently won a contract with the city of Pittsburgh to recycle household e-scrap.

ELoop’s State College facility, where the FPD PRO will be located, was formerly a Corning factory that produced CRTs.

“It’s a building that helped produce many of the country’s CRT television sets,” Eldridge said, “and now it’s going to harvest components and commodities to enhance the circular economy and support the right-to-repair movement and thus support local SME business growth.”