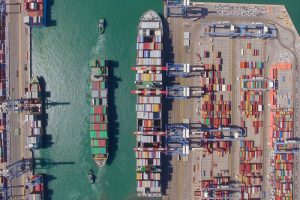 An e-scrap group that advocates for exports of used electronics has detailed a new mechanism for funding e-scrap collection in an area of the world that has long been perceived as a materials dumping ground.

Fair Trade Recycling’s carbon offset model aims to encourage exporters to sell to buyers in Ghana at discounted prices, with the goal of redirecting the saved money into local e-scrap collection.

Ghana is home to the infamous Agbogbloshie area, which a number a number of news organizations have portrayed as a hotspot for crude processing of old electronics. Such reports have sparked intense debate within the greater electronics recycling sphere.

In an interview, Fair Trade Recycling’s Robin Ingenthron, who has been a strong supporter of exporting functional electronics, said much of the problem in Agbogbloshie and elsewhere stems from large volumes of electronics that have been used by residents of African countries. No formal system is in place to collect and recycle the materials when they reach end of life, he noted.

“Very little of what you see in Agbogbloshie was imported in recent memory,” said Ingenthron, who also owns Vermont processor Good Point Recycling. “Most of the junk are things like VCRs, which Africa hasn’t imported since the DVDs came out. Even if you stopped 100 percent of imports five years ago, Agbogbloshie would be exactly the same.”

Inspired by other industries

With the new program, Fair Trade Recycling aims to provide a mechanism of addressing the e-scrap problem in Ghana, however the materials ended up there. Under the concept, sellers of imported container-loads will offer a discount to buyers, provided the buyers use the savings to fund e-scrap collection.

The idea is based on the carbon offset model used by companies in a variety of sectors that produce greenhouse gas emissions. An airline, for example, might not be able to make its planes burn cleaner, Ingenthron said, but it can “offset” the carbon it produces through investments in wind farms, biomass and other environmental measures.

In practice, Ingenthron said, the program will function very similar to retail takeback programs in the U.S., except the secondhand seller will fund recycling as opposed to the equipment manufacturers that back the formal programs in many U.S. states and some countries.

Ingenthron has presented the idea as a new concept for the industry, though it remains to be seen how many players will participate on the exporting front.

“The point is that it’s now being collected by a well-educated valedictorian professional,” Ingenthron said, rather than potentially being handled in scenarios that could hold significant risk to human health and the environment.

And what exactly is the incentive for sellers to take part and ask for lower prices? Ingenthron said that apart from the feel-good element of helping a well-documented pollution problem, sellers will be able to point to the program when soliciting material from companies and organizations that may be wary of downstream mismanagement.

“We see it as primarily competing with shredding, which has used negative images of overseas markets to dissuade exports,” Ingenthron said, adding that “for commercial and institutional clients that are already going for best price, it will give them something to say when they are criticized for it.”

That would mean more materials available for import by the buyer.

“If you will demonstrate that you’re really contributing to solving the problem … the incentive for you guys will be not just the discount, but that more American and European companies will be willing to sell to you,” Ingenthron explained.

Editor’s note: Shortly after this story was published, E-Scrap News published an op-ed in response to the Fair Trade Recycling initiative from Jim Puckett, executive director of the Basel Action Network.