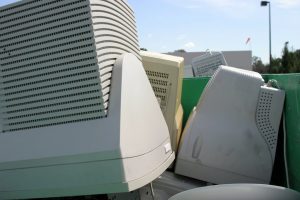 Illinois legislators are quickly advancing a bill that aims to make it easier for e-scrap companies to send CRT glass to storage cells.

The legislation says the state won’t require accreditation for companies using that storage-cell option. It also says “any organization that accredits facilities” is prohibited from penalizing e-scrap companies if they use the option.

The Illinois House of Representatives passed HB 6321 in a 114-0 vote on April 7, and the Senate’s version, SB 2770, was approved that same day by the Environment and Conservation Committee in an 8-0 vote. It’s now up for consideration by the full Senate.

Representatives of the e-Stewards and R2 certifications have challenged the legality of the bill.

R2 prohibits the storage-cell approach, and e-Stewards permits it only as a “conditionally allowable option.”

According to the General Assembly website, two solid waste management agencies, the Illinois Manufacturers’ Association, the National Waste & Recycling Association, Peoria Disposal Co., and the Illinois Chamber of Commerce signed up at the Senate committee hearing in support of the bill.

Willie Cade, founder of Chicago-based PC Rebuilders and Recyclers, and John Lingelbach, executive director of Sustainable Electronics Recycling International (SERI), which administers the R2 standard, signed up in opposition to it.

Cade created an online petition saying the bills are illegal attempts to rewrite the R2 standard. As of April 13, 55 people signed it.

In the House, the bill was filed by Democratic Rep. Jehan Gordon-Booth, who is assistant majority leader. In the Senate, Democratic Sen. David Koehler, who chairs the Environment and Conservation Committee, submitted it. They represent the Peoria area.

The donations were similar in size to sums given by Coulter and the companies to several other candidates and political committees.

A year ago, the Illinois Senate approved a resolution urging Basel Action Network and the e-Stewards Leadership Council to amend the e-Stewards standard to allow the storage-cell approach. Koehler, one of the authors, said on the Senate floor the resolution involved a business in his district and “is going to create jobs and will help us in the future with recycling,” according to a session transcript.

Multiple calls from E-Scrap News to the offices of Gordon-Booth and Koehler seeking comment were not returned. Coulter and Rich Hipp, CEO of Kuusakoski U.S., could not be reached for comment by E-Scrap News.