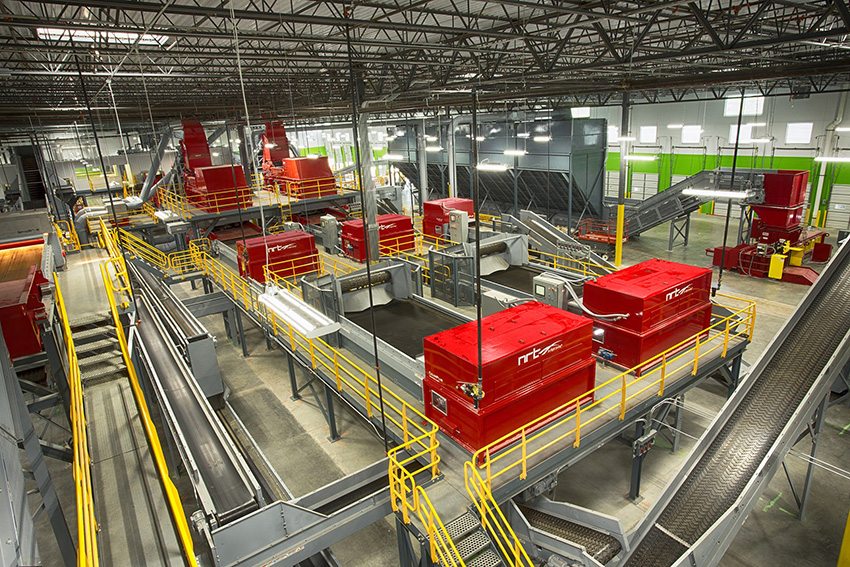 Equipment in CarbonLite’s Dallas PET recycling facility. Indorama Ventures submitted the high bid to acquire the plant during an auction this week.

As part of a bankruptcy case, DAK Americas, Indorama Ventures and The Sterling Group have submitted the high bids to acquire CarbonLite’s PET recycling facilities.

CarbonLite CEO Leon Farahnik discussed the development in an interview.

CarbonLite, a PET bottle recycling company serving major U.S. beverage firms, in March filed for Chapter 11 bankruptcy, indicating it would reorganize and continue operating. The company reported liabilities of between $50 million and $100 million and assets within the same dollar range.

CarbonLite operates plants in Riverside, Calif., Dallas and Reading, Pa., which together have a total annual production capacity of about 250 million pounds of RPET pellets. In early May, the company filed paperwork to auction off the Pennsylvania plant, the company’s largest and newest facility, having started up in fall 2019. Virgin resin producer DAK Americas initially submitted a stalking horse bid to purchase the Pennsylvania facility for $96 million.

During the second half of May, all three processing plants have been auctioned, according to court documents. Farahnik confirmed the sales in an interview last week. The sales still need court approval before they’re considered final, and Farahnik said he anticipates the sales will be wrapped up by June 10.

Farahnik said the company has planned all along to do what is best for the employees at the facilities, and initially that plan centered on reorganizing and continuing ownership.

“Unfortunately, it didn’t work out as a reorganization. It ended up to be more of a sale process,” Farahnik said.

CarbonLite attorneys filed notice of an auction for the Riverside facility on May 19 and it was held via Zoom on May 21. Two companies submitted bids, according to a post-auction report. The highest bid came from TSG Shelf II Acquisition LLC, at $57.5 million. CarbonLite attorneys will seek court approval of the sale in a June 3 hearing, according to auction documents.

Farahnik said all three plants “are in good hands, and they will continue operation.” He noted there will be no loss in U.S. PET recycling capacity associated with the CarbonLite bankruptcy.

Besides the reclamation facilities, CarbonLite operates a thermoform packaging manufacturing plant in Oxnard, Calif. through subsidiary company PinnPack. Farahnik said the PinnPack facility is separate from the CarbonLite auctions. It could be sold, he said, but negotiations are ongoing.

Farahnik previously issued statements on the bankruptcy, noting that the COVID-19 pandemic created substantial pressures for CarbonLite. He elaborated on those pressures in last week’s interview and pointed to wider, systemic plastics recycling industry struggles that contributed to the bankruptcy.

The pandemic delayed the opening of CarbonLite’s Pennsylvania facility by 11 months, Farahnik said, creating “a very costly situation.” Additionally, the company faced multiple COVID-19 outbreaks at its Dallas plant. At one point, the facility had 40 people out with COVID-19 at the same time.

“That created a lot of shutdowns and startups and shutdowns,” Farahnik said.

Additionally, as Farahnik said in an interview last year, CarbonLite faced feedstock shortages in California. The deposit program had less material coming in because some of the state’s redemption requirements were suspended. At that time, Farahnik said the California facility was forced to combine curbside and deposit bales, resulting in a more contaminated stream of PET coming into its facilities. In the past, it used strictly deposit bales.

“All of these, put together, created a heavy-duty cash crunch on the company,” Farahnik said.

But beyond the pandemic, Farahnik said, one of the largest factors in the financial strife was the low price of virgin material, combined with brand owners who were reluctant to pay more for recycled material.

“We couldn’t increase our prices to cover our expenses,” Farahnik said. “That hurt us very badly.”

He acknowledged CarbonLite “didn’t have the correct pricing in the market” and said he takes responsibility for that. But when the company moved to increase its prices, it faced reluctance from some customers, court documents indicated earlier this month.

Farahnik did not blame CarbonLite’s customers, as he said they face pressure from their buyers to not increase prices. Instead, he said those buyers – the major brand owners and retailers that are making recycled-content pledges – need to be willing to pay more to their suppliers.

“If they want post-consumer material, they have to be willing to pay more for the material,” Farahnik said. “Recycling has been hurting for a long time and it needs a real change in pricing structure to be successful.”

A version of this story appeared in Plastics Recycling Update on May 26.