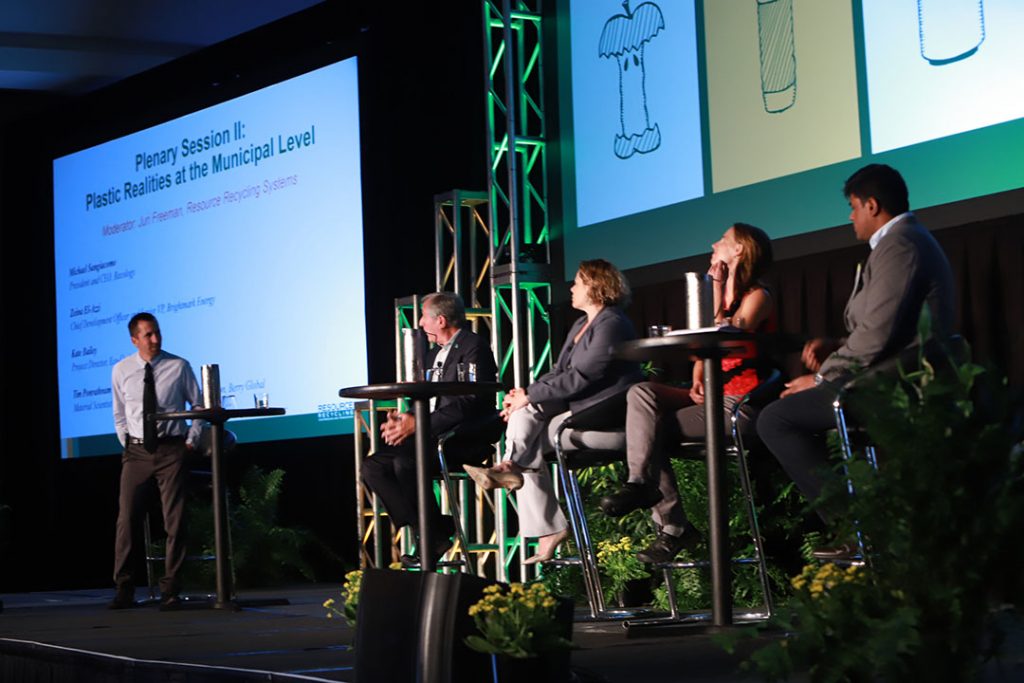 Should some types of single-use plastic be banned? Or is infrastructure improvement a better answer to current plastic waste concerns? A varied group of industry leaders tackled those questions last week.

A panel on Aug. 28 at the Resource Recycling Conference and Trade Show in New Orleans explored the intersection of municipal recycling and wider plastics management.

As marine debris problems have grabbed the attention of individuals worldwide and the effectiveness of plastics recycling has been called into question by major media outlets, plastics has become the topic du jour for many community recycling leaders.

“Everywhere we go, people want to talk about plastics,” said Kate Bailey, who is policy and research director for Boulder, Colo.-based Eco-Cycle and works to help communities across the country improve materials recovery. “This is our Mobro garbage barge, our opportunity to really do something on plastics while we have the world’s attention.”

Of course, deciding what to do on the issue is far from straightforward.

On stage in New Orleans, Bailey said the world is currently on pace to, by 2050, produce four times as much plastic as it does currently. So her priority is working to reduce global usage.

“This is our Mobro garbage barge, our opportunity to really do something on plastics while we have the world’s attention.” – Kate Bailey, Eco-Cycle

Zeina El-Azzi, co-founder of a company that is developing a $260 million plastics pyrolysis plant in Indiana, countered that materials recovery can be a huge part of improving plastics management – if strategies are built on sound economics. Her business, Brightmark Energy, plans to produce low-sulphur diesel, wax and naptha and is one of a growing group of enterprises that fall in the chemical recycling category.

“We have a false premise that single-use plastics or multi-use plastics cannot be recycled; that is a fundamentally false premise,” said El-Azzi. “There have been mechanical and chemical recycling of these plastics for many, many years. The problem is it hasn’t been commercial or attractive to recycle those plastics.”

She noted construction of the Brightmark site in Ashley, Ind. is ongoing. When it’s operational, the company will pay suppliers of mixed plastics – “from bottles to Barbie heads, we can take everything” – and will have a capacity of 100,000 tons of incoming material annually.

She said Brightmark is already planning its second site and that the price tag on that operation could exceed $1 billion and would have an annual capacity of 800,000 tons.

“To reach those goals that many states and communities want to reach, we are going to have to go far beyond mechanical recycling,” El-Azzi said.

For the head of one major West Coast hauler and MRF operator, the answer lies in legislation.

Michael Sangiacomo, CEO of Recology, said his company is putting $1 million behind an effort to get a single-use plastics ban on the California ballot in 2020. And Recology was also instrumental in the introduction of two complementary California bills – SB 54 and AB 1080 – that require a 75% reduction in single-use packaging waste by 2030.

Sangiacomo said Recology, which serves around 130 West Coast communities and handles waste and recycling collection in San Francisco, has been spurred to push for action around plastics in large part because markets are demanding cleaner paper bales.

“We’ve invested a lot in optical sorting, allowing us to get low contamination,” he noted, “but that’s given us more plastic waste to deal with.”

He noted that pressure needs to be put on plastics manufacturers to produce only those items that integrate well into the existing recycling system.

“There are plenty of types of plastic that can be reprocessed and reused,” he said. “The focus ought to be on those.”

“When you go to communities in Southern states where many people are employed by petrochemical companies, talking about bans for chemicals or plastics [is not] going to get you anywhere.” – Zeina El-Azzi, Brightmark Energy

A fourth speaker touched on the specifics of such a recycling-friendly focus in the manufacturing sphere.

Tim Ponrathnam, a material scientist at plastic packaging giant Berry Global, said his company has responded to market demands in recent years by developing a stand-up pouch that can be recycled via film drop-off efforts, rolling out a line called Verdant that uses high levels of post-consumer resin, and other innovations.

“We are committed to ending plastic waste by expanding the infrastructure to increase recovery and reduce loss,” he said.

He also explained that making recycling-oriented changes to packaging can take time. For instance, a number of Berry’s applications require food-contact grade resin, something only a limited number of plastic recycling companies can provide.

“You typically go through an extended stability test with the product and the interaction with the package,” said Ponrathnam. “We’re currently in that step right now with several applications.”

One size does not fit all

So what can we expect in the near term on plastic waste solutions?

One thing that seems clear is that no one strategy will work in all communities.

“When you go to communities in Southern states where many people are employed by petrochemical companies, talking about bans for chemicals or plastics [is not] going to get you anywhere,” said Brightmark’s El-Azzi. “But those communities are very interested in protecting their environment. They’ve seen the impacts on their health in terms of toxicity, in terms of water and wastewater.”

It’s also clear that recycling leaders at the community level are ready to keep pushing for improvements on plastic management from industry and high-level decision-makers.

“We need cities to speak up,” said Bailey of Eco-Cycle. “We need mayors complaining to the plastics industry, to the state and national government that … this burden should not be on cities alone. Our tax money goes to a lot of great things, like public safety and schools and roads. Plastics is not up there in that same tier, in my opinion.”

And it’s not just recycling professionals that are seeing the urgency of the issue. In California, the legislation backed by Recology to spur more recyclable packaging has advanced quickly, with the two parallel bills advancing out of their respective chambers this summer.

“We think it’s highly likely that this is going to happen and get signed before the end of this year,” said Sangiacomo. “We want to hold the industry accountable for the things they are doing to our environment. We’re committed to making this happen.”