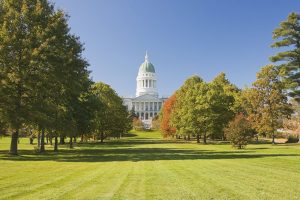 The state of Maine has pledged to implement extended producer responsibility for packaging materials. Legislation will be proposed by the end of this year.

Maine Gov. Janet Mills on May 30 signed legislation resolving to “support municipal recycling programs” through the development of packaging product stewardship laws. According to the bill text, a proposal meeting specified guidelines must be submitted to a legislative committee by Dec. 16 for consideration in the next legislative session.

The bill does not propose a specific system, instead laying out guidelines the producer responsibility program must meet. For example, it calls for the creation of a nonprofit stewardship organization to manage the program and cover at least 80% of the cost of recycling non-readily recyclable packaging sold in Maine.

Packaging that is already covered by the state’s container deposit legislation must be exempt from the EPR program, according to the legislation.

Other specifics, such as how producers will be able to protect themselves from “free rider” producers who don’t pay into the program, will be determined during the proposal development process.

“With commodity prices at all-time lows due to the loss of export markets, local governments are struggling to maintain recycling programs,” Cassel wrote. He noted some recycling programs in Maine have had to stockpile recyclables due to the market shifts in recent years, and that many programs are dealing with high contamination rates and other challenges.

“These problems cannot be solved with the current system,” he wrote, describing EPR as “the only large-scale solution that takes an entirely different approach to create a much-needed, significant transformation in the entire recycling system.”

The Plastics Industry Association wrote that it supports “the idea that manufacturers play an important role in being good stewards of the environment.” However, the organization expressed opposition to EPR as a strategy, testifying that EPR programs “are an inefficient use of resources, are not flexible to changing waste streams, do not fairly represent all manufacturers and further hide the cost of recycling and recovery from consumers.”

Although packaging EPR has taken hold in parts of Canada and Europe, it has not been implemented anywhere in the U.S. Maine joins a small group of states that have signaled their interest in packaging product stewardship legislation in recent years.

California included EPR as one of several possible packaging policy framework options the state could implement to increase diversion. A proposal in Connecticut drew fierce debate among industry stakeholders. Massachusetts lawmakers introduced a packaging EPR bill this year, but it did not move out of committee. And Rhode Island legislators considered a similar proposal a couple years ago.