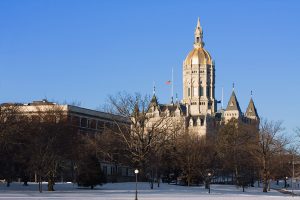 Extended producer responsibility rose to the forefront of debate in Connecticut as a strategy to reduce packaging waste in line with state mandates. A committee tasked with advising lawmakers during the coming legislative session recently split on the strategy, but the majority advised against it.

Spurred by legislative action passed early last year, one of the committee’s chief end goals is to identify strategies for reducing packaging in the waste stream by at least 25 percent. But with stakeholders representing a diverse range of interests, consensus did not come easy.

Instead of a switch to a producer-funded recycling system for packaging, the committee recommends tax incentives for infrastructure development, public-private partnerships, evaluation of mixed-waste processing, and utilization of unclaimed bottle deposits to fund waste-reduction initiatives.

Although extended producer responsibility (EPR) did not receive a majority vote as a recommendation for lawmakers, in the end, the report included arguments for and against the strategy.

The committee convened in February 2017 and began a series of regular meetings that were held in the months following. The first few meetings each focused on a different stakeholder group that would be impacted by a packaging policy. The group heard from municipalities, retailers, haulers, the glass and plastic packaging industries, and environmental organizations.

In December, during a three-and-a-half-hour meeting, the task force voted to craft its final report, which was released this month. It details measures the group will suggest to lawmakers during the 2018 legislative session.

What would EPR change?

“It would significantly change the financing of the system. I think that’s the biggest thing,” said Dan McGowan, Connecticut Recyclers Coalition (CRC) president and solid waste supervisor for the town of Branford, Conn. The packaging policy development was a key topic of discussion at the CRC’s recent annual conference. CRC’s members include municipalities, non-profit groups, waste-to-energy plants, organics facilities, haulers and more.

Under an EPR system, recycling would shift away from a municipally funded service toward a producer-financed program likely run by a stewardship group. That comes with enormous considerations for various stakeholders. For example, the stewardship group could set different territorial boundaries for recycling collection, substantially impacting haulers. MRF operators are concerned with how they’ll be affected, particularly those who have completed large capital investments.

“That could mean a gain of business, but it’s definitely a change in that structure,” McGowan told Resource Recycling.

Proponents of EPR say it would save the municipalities a significant amount of money.

The state has looked at the model in British Columbia, Canada as an example of how EPR could work in Connecticut. Representatives from the Recycle BC organization visited the task force to describe how the program has rolled out there.

Prior to voting on EPR, Will Flower, committee co-chair and vice president of hauler Winters Bros. Waste Systems of Connecticut, accurately predicted that six members would oppose the strategy and three would be in support.

But given the sharply diverging opinions, Cassel proposed both the “for” and “against” groups each include an addendum to the final report, laying out their case. Other committee members agreed.

Virtually all the opposing testimony focused on the costs associated with EPR, both to businesses and to consumers. Reilly said the CTA, which routinely testifies on electronics EPR programs, supports a point-of-sale fee that shows consumers they are part of a recycling chain, and that recycling is not free.

“Unfortunately, the hidden fees that happen through an EPR system don’t send that message directly to consumers,” she said.

Spinella and other opponents rejected the notion that EPR was a funding mechanism for packaging collection. Instead, he said, it is a tax that will burden consumers.

“Does anyone in this room honestly think that the producers are not going to pass on the added cost to the taxpayers and the residents of Hartford and New Haven? Of course they are,” he said. He added that “it’s absolutely nonsense to say that producers provide funding; it’s the people, it’s the people who buy the product every single day at the cash register.”

DEEP, in written testimony supporting EPR, provided an alternate view on the cost.

“EPR is demonstrated to lighten the cost burden on municipalities while improving environmental outcomes,” the agency wrote. “One way or another, making improvement to recycling programs requires new investment in collection and processing infrastructure, as well as public outreach. These costs should not be borne by municipal or state budgets alone.”

In supporting EPR, Cassel pointed to packaging systems in Canada, across Brazil, the European Union, India, Israel, Russia and other countries as evidence of the strategy’s success.

“EPR systems are growing worldwide and are the only systems seriously under consideration by countries seeking to meet overarching goals similar to those set out by Connecticut,” Cassel wrote.