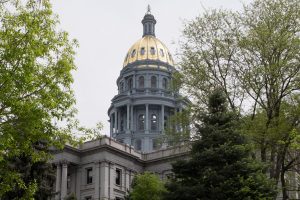 The Colorado capitol building in Denver.

The Colorado General Assembly sent to the governor SB19-192, which creates a state entity to provide waste diversion grants in the state’s Front Range region, including the counties of Adams, Arapahoe, Boulder, Douglas, Elbert, El Paso, Jefferson, Larimer, Pueblo, Teller and Weld, and the cities and counties of Broomfield and Denver.

Public entities, nonprofit groups and for-profit businesses in the Front Range can all apply for grants. The highly populated Front Range region generates about 85% of the state’s waste and is also where much of the recycling infrastructure is located.

According to the bill, the grant funds could be used for a wide variety of efforts to boost diversion, including communications, community engagement, equipment, staffing, research, policy development, supplies and more.

The Centennial State’s recycling rate is about 12%, roughly one-third of the national average of 34%.

A report published last year said the state is headed in the wrong direction on materials recovery and called on state government and others to take steps to boost recycling there. The report was produced by recycling company Eco-Cycle and the Colorado Public Interest Research Group (CoPIRG), and it was endorsed by Recycle Colorado, the state recycling organization.