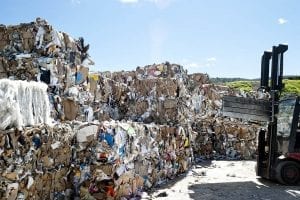 Although Chinese scrap plastic import permits remain scarce, the government has ramped up the volume of recycled paper it is allowing into the country to levels not seen since March.

The Chinese government generally issues permits twice per month, approving a certain amount of scrap material for import into the country.

The Ministry of Ecology and Environment (MEE) on Oct. 18 issued its 22nd round of import permits for the year. The list approves the import of more than 2 million metric tons of recovered fiber. It comes after three months of permit volumes in the range of 300,000 to 800,000 metric tons.

In all, the Chinese government has approved 18 million metric tons of recovered fiber for import this year.

On the plastics side, the last few rounds of permits have brought the lowest consecutive volumes of the year. When the MEE issued permits on Sept. 19 and Sept. 29, plastic wasn’t included. Last week, a mere 203 metric tons of scrap plastic were approved for import.

Overall, 67,000 metric tons of scrap plastic have been approved for import into China this year.

The latest U.S. Census Bureau figures also continue to show smaller and smaller volumes of U.S. scrap plastic heading to the world’s most-populous country. In August, U.S. exporters sent 4.3 million pounds of plastic to China, the lowest volume of any month in 2018.

Most post-consumer plastics have been officially banned from import into China since the beginning of this year. Chinese leaders have stated they will prohibit imports of post-industrial plastics beginning next year.

U.S. exports of recovered paper to China have remained relatively consistent throughout the year, averaging 608,000 metric tons per month. The August number – 629,000 metric tons – is in line with that average.