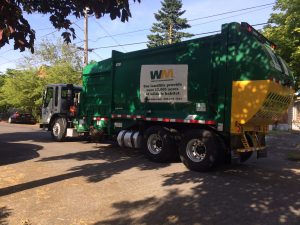 Waste Management, Republic Services and Waste Connections all reported jumps in recycling revenue during the second quarter, compared with the second quarter of 2016. The higher commodity values are a continuation of a trend that started late last year and has continued into 2017. The first quarter of this year saw particularly large revenue gains from year-over-year commodity value increases.

In recent conference calls with investors, executives downplayed the impacts to their companies of China’s upcoming ban on scrap plastic and unsorted mixed paper imports.

“Neither of these categories should materially affect us because of our current sorting processes and capabilities,” said Jim Trevathan, Waste Management’s chief operating officer. “Although we do not see a material impact to our overall business, we believe this action does create further uncertainty in forecasting recycling price levels.”

The following are summaries of second-quarter recycling-related financials for the three largest publicly traded companies involved in residential recycling in North America. The data was reported in filings with the U.S. Securities and Exchange Commission (SEC) and conference calls with investors.

Recycling brought in $375 million during the second quarter, up 9 percent year over year, according to Waste Management’s SEC filings. During the first half of the year, recycling operations generated $747 million in revenue, a 33.9 percent increase over the first half of 2016.

During a July 26 conference call with investors, Devina Rankin, chief financial officer for the company, said the Houston-headquartered corporation experienced average commodity prices of $130 a ton during the first half of the year.

Waste Management’s recycling business includes both the sale of materials generated by the company’s own materials recovery facilities (MRFs) and the sale of others’ bales through its brokerage business.

In response to a question from an investor about the brokerage area, Trevathan described it as a lower-profit business, with 4 to 6 percent margins. But is still accounts for about half of total recycling revenue, he said, and it’s good for the company strategically.

“With those additional tonnages, we’re able to command a little higher price per ton when we sell all of the volumes, both our MRF-generated tons and this brokerage volume,” he said. “It provides our customers that use this recycled commodity with a really consistent and higher quality volume and lets us get, we think, a couple extra dollars per ton.”

According to SEC filings, recycling revenue accounted for 10.2 percent of Waste Management’s total revenue pie during the second quarter.

The company brought in a total of $3.68 billion in revenue during the quarter, a year-over-year increase of $252 million, or 7.4 percent. Of the additional $252 million, higher market prices for recycled commodities and volume growth contributed $90 million.

The Phoenix-headquartered company brought in $136 million from the sale of recovered commodities during the second quarter, an increase of 34.1 percent over the prior-year period. For the first half of the year, recycled commodities sales brought in $270 million in revenue, up 43.4 percent year over year.

According to the company’s SEC filings, higher commodity prices have helped drive total revenue boosts this year. Specifically, during the first half of the year, total revenue increased by 7 percent year over year. Of that 7 percent, recycled commodities sales made up 1.8 percentage points of the increase.

Excluding glass and organics, average commodity prices were $157 in the second quarter, up from $116 during the same period in 2016, Chuck Serianni, chief financial officer, told investors on a July 27 conference call.

Regarding China’s ban announcement, Donald Slager, Republic CEO, told investors the company generates high-quality fiber and plastic products and has never had an issue with rejected shipments. Additionally, the company doesn’t rely solely on China, and a great deal of fiber remains domestic, he said.

Most of the company’s material that is going to China is generated at West Coast operations, which have a strong track record in quality, Slager said.

Recycling revenue made up 5.4 percent of the company’s total revenue pie during the quarter.

Republic brought in $2.53 billion in total revenue during the second quarter, up 7.5 percent over the prior-year period.

Excluding the impact of the large acquisition, Waste Connections brought in $24 million during the second quarter of this year, an increase of 44.9 percent year over year.

The boosts were largely tied to higher fiber prices, Ron Mittelstaedt, company CEO, told investors on a July 26 conference call. For example, OCC averaged $172 per ton during the second quarter, up 65 percent from the prior-year period and up 4 percent from the first quarter of this year. OCC prices are now exceeding $190 a ton.

“Recent pronouncements from China regarding its intention to reduce the import of certain types of scrap materials by year-end could impact the prices for recycled commodities, given the uncertainty resulting from such statements,” Mittelstaedt said. “That said, we have not seen any negative impact from that pronouncement.”

In response to a question from an investor about other market opportunities for fiber, Mittelstaedt described China as the “800-pound gorilla” for which there aren’t substitutes.

Worthing Jackman, chief financial officer, emphasized that the quality of the bale is critical, and there will always be a premium price paid for a high-quality product. If anything, China is trying to stop imports of garbage wrapped in cardboard, he said.

Mittelstaedt noted that commodity prices are always going to ebb and flow.

“That’s why we would prefer that a low percentage of our business be based on commodities,” he said.

According to the company’s SEC filings, recycling revenue made up 3.5 percent of Waste Connections’ revenue pie during the second quarter.

Overall, Waste Connections generated revenue of $1.18 billion during the second quarter. Acquisitions completed in the past year contributed about $386 million to that number. Excluding the impact of acquisitions, Waste Connections’ revenue increased 8.6 percent year over year.