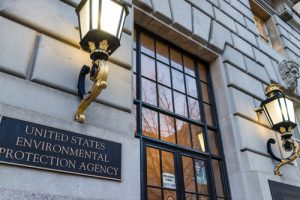 After he spent a good chunk of his campaign blasting the Environmental Protection Agency, it was hardly surprising that Donald Trump would take a knife to the EPA budget once he was actually in office. But the Trump administration’s proposed 31 percent slash last week has nevertheless raised eyebrows everywhere, including the recycling industry.

Under President Trump’s budget blueprint, the federal environmental agency would cut 3,200 positions from its staff, which currently numbers around 15,000. It would also eliminate more than 50 individual EPA programs. All told, the president wants to cut $2.6 billion from the EPA’s budget.

When it comes to funding materials recovery programs in America, most public dollars come from state and local sources, not the U.S. EPA. But recycling and the agency are still intimately intertwined.

The EPA’s annual solid waste report, for example, offers key information for industry benchmarking numbers. And the agency has been critical in convening stakeholders to develop markets for recyclable materials and put other plans into action on a regional level. The agency has also of late served as a powerful voice when it comes to prioritizing food waste reduction efforts and transitioning toward a sustainable materials management mode of thinking.

Trump’s proposal is still a long way from actual implementation – Congress ultimately determines the nation’s budget, and many lawmakers on both sides of the aisle have expressed opposition to the president’s proposal. But the Trump budget does show the depth of the administration’s aims when it comes to slimming down the agency and makes it clear that serious cuts will almost assuredly be coming.

What it all means for recycling is unclear, but a review of the EPA’s current touch points with U.S. materials recovery shows some of the areas where impacts could be felt.

EPA’s most visible recycling work is arguably in the realm of data analysis. The agency publishes an annual report of nationwide recycling statistics, providing a large amount of information on municipal solid waste generation, landfilling, combustion and recycling.

In recent years, the agency has begun framing the report in terms of sustainable materials management (SMM), a concept in which the entire life cycle of a material is taken into account when determining its environmental impact. The agency’s work in that realm has influenced recycling stakeholders. For example, EPA’s guidelines on SMM were directly cited in Waste Management’s recent decision to shift the metric the company uses to talk about materials diversion.

EPA’s SMM efforts are not named in the budget blueprint, so it remains unclear whether they would stay or go if the cuts moved forward. Few of the 50 programs that would be cut are named, although one specifically identified is Energy Star, an energy efficiency program that, among other services, educates the public on hard-to-recycle products.

It’s important to note, however, that discussions of SMM often take place within the larger context of climate change. SMM talking points almost always include details on the way smarter materials choices can lead to fewer greenhouse emissions. EPA’s recent collaboration with the U.S. Department of Agriculture to set the nation’s first food waste reduction goals also used global warming concerns as a rationale for action.

Given the Trump administration’s determination so far to pull the plug on any federal initiatives aimed at mitigating climate change, it seems unlikely that SMM or other initiatives would continue to gain support from leading officials if the projects have strong ties to climate-related strategy. For a few years at least, those who want to keep SMM as part of the national strategy may need to pivot and frame the concept in terms of job development and economics.

Besides its SMM efforts, another key EPA role in the wider recycling ecosystem is one of matchmaker.

EPA often works behind-the-scenes in the industry to foster recycling market development and to bring together industry stakeholders to share information and build relationships. The agency hosts webinars featuring industry experts to discuss current issues. EPA also regularly collaborates with recycling industry organizations such as The Recycling Partnership. The two recently teamed up to study the state of curbside recycling programs nationwide.

Furthermore, EPA was instrumental in bringing about electronics recycling certification.

Fostering industry connectivity is part of the agency’s “voluntary” efforts, which are distinct from regulatory requirements (writing regulations, enforcing standards and other activities tied to environmental laws). And it’s the voluntary side that seems most likely feel the brunt of any cuts that do actually make it into a final budget.

If approved, the proposed cuts would mean the agency would be operating at just two-thirds of its staffing level from 17 years ago. Although its budget has increased about $540 million overall since 2000, the agency has lost nearly 3,000 employees in the same period of time, and the cuts described in the budget blueprint would bring staffing down to roughly 12,000 total employees. The New York Times recently demonstrated that when adjusted for inflation, the EPA’s budget under the Trump proposal would be its lowest ever.

If an EPA office suddenly has a notably shrunken staff but still has a list of regulatory requirements that must be met, it seems logical that initiatives like market development and convening of stakeholders would be left on the back burner.

Effects on research and grant funding

In some ways, EPA money does directly flow into materials recovery efforts. Those funds are relatively minor, but they are currently under threat.

The Trump budget would cut funding to EPA’s Office of Research and Development by about 48 percent, or $233 million. ORD operates the National Risk Management Research Laboratory (NRMRL) in Cincinnati, which has supported recycling research.

“ORD would prioritize activities that support decision-making related to core environmental statutory requirements, as opposed to extramural activities, such as providing STAR (Science to Achieve Results) grants,” according to the budget blueprint.

The STAR grant program in part funds Small Business Innovation Research grants, according to EPA, which are sometimes used for recycling research.

At least one area of agency funding appears safe under the budget proposal. The blueprint indicates EPA’s state revolving funds program, which provides states with funding primarily for water and wastewater infrastructure projects, would be funded at $2.3 billion. That sum is actually a slight increase over its fiscal year 2017 level.

As Vice notes, this suggests the administration’s intent is to cut EPA’s in-house programs and enforcement activities, rather than to ax funding that is handed down to state, local and tribal governments.

But categorical grants, on the other hand, would be cut substantially. The funds are provided to states for specifically defined uses, and would be cut by 45 percent, down to $597 million.

Still, reductions in grant funding may not mean a massive hit for solid waste programs, as the EPA’s solid waste grants are a relatively small part of the agency’s budget. Mike Giuranna, an EPA Region 3 solid waste specialist in Philadelphia, said his regional office awarded $65,000 in grant funds last year. That number has fluctuated widely over the years, up to about $300,000 at one time.

Giuranna, who has worked at the EPA for 33 years, emphasized that the cuts are only at the proposed stage. Although he noted there were environmental activists demonstrating outside an EPA office a couple weeks ago based on the anticipated cuts to the agency, he did not describe the proposal as unprecedented. Large cuts were proposed during the Reagan administration, and again in 1995 when Republicans gained control of both the House and the Senate.

“I’ve seen it go up and down,” Giuranna said. “I think a lot of people just deal with what we get.”