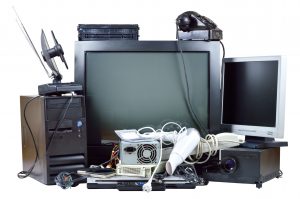 Most people agree electronics should be recycled rather than thrown away, but consensus quickly evaporates when discussing how the costs should be paid.

“Figuring out how to pay for recycling electronics is difficult,” said Sarah Murray, coordinator of Wisconsin’s E-Cycle program, during a recent webinar. “Our goal is generally to have it be more toward the consumer of the electronics rather than the taxpayer, but how you do that is complicated.”

U.S. states with electronics recycling programs approach funding differently than Canadian provinces, a majority of which implement what’s called an eco fee. Consumers pay the fees when they buy new electronics, and the money goes into an industry-managed stewardship fund. Although eco fees are employed in some U.S. states for paint and mattresses, the webinar explored using the approach to fund e-scrap recycling.

Two state officials said the approach might be well-received in their states.

The webinar was sponsored by the U.S. EPA, the Northeast Recycling Council, the Electronics Recycling Coordination Clearinghouse and the Product Stewardship Institute.

Different from the rest

Eco fees provide funding to properly handle materials at end-of-life. A stewardship organization sets the fee amount based on sales, expected returns, costs to manage materials and the impact of companies that evade paying their share. The stewardship group collects and spends the fee money.

There can be fixed fees, or they might vary depending on the product. They may or may not be listed on sales receipts.

Eco fees are distinct from advanced recycling fees (ARFs), which Scott Cassel, CEO of the Product Stewardship Institute, said are almost in a category of their own. Under an ARF, the retailer pays the fee straight to the government, which handles the funds.

“We don’t even consider these (extended producer responsibility) because the manufacturers have no role in it,” Cassel said.

But eco fees are also different from traditional EPR programs, where the costs are internalized by the manufacturer. Although Cassel said that, in either scenario, most manufacturers aren’t likely to absorb the cost.

“I think we all agree that the consumer is going to end up paying one way or another, so in some ways it’s a little bit semantics,” Cassel said.

Eco fee proponents note the mechanism provides a “level playing field” for manufacturers. The fees also can raise consumer awareness of appropriate end-of-life handling, particularly when the cost is visible at the point-of-sale.

But eco fees have also generated controversy in the past, especially when they are visible to the customer as an itemized charge on a receipt.

Solid waste officials from two states with EPR laws said their states may be interested in exploring an eco fee approach to e-scrap.

Garth Hickle, product stewardship team leader for the Minnesota Pollution Control Agency, said he thinks an eco fee model could receive support in his state, given the amount of attention that’s been focused on EPR programs in recent legislative sessions.

In Minnesota’s program, weight-based recycling obligations haven’t always lined up with generation volumes, particularly as product lightweighting continues. The state’s system also lacks some of the provisions in other EPR programs, such as requirements for certain numbers of drop-off locations to ensure recycling convenience.

“The certainty that an eco fee provides to all players along the product chain is important, as opposed to the current system right now,” Hickle said. “But the key piece of that is coming up with a collective stewardship organization that really is able to manage the program and achieve the outcomes on a collective basis. That really provides a point for recyclers, collectors, local governments and others to really interact with a single entity.”

Murray, Wisconsin’s program coordinator, said that collection in her state has exceeded manufacturers’ weight-based obligations every year since the program began in 2010. Wisconsin allows collectors to charge an end-of-life collection fee when consumers drop off electronics, and the number charging fees has increased as stores such as Best Buy have ended free CRT takeback programs, Murray said.

A visible charge at the point of sale could be more effective than at end-of-life, she said, when it’s easier for a consumer to decide to dump the product.

Still, she noted electronics is a more complicated waste stream than some of the other materials with eco fee mechanisms.

“There’s just much more diversity in the (electronics) material that’s being sold now,” she said.

Tom Metzner, an environmental analyst for the Connecticut Department of Energy and Environmental Protection (DEEP), said he doesn’t see an eco fee offering much benefit over his state’s current program.

Connecticut’s EPR program has provisions requiring convenience and accessibility, and it requires certain downstream due diligence by recycling companies. DEEP wouldn’t want to risk losing those elements under an industry-led program, Metzner said.

“We have good coverage, we have good recovery right now,” he said, later adding that eco fees might offer more “for states who don’t have e-waste laws and are trying to build political consensus with manufacturers.”

Example from the north

No U.S. states use eco fees, although California has an ARF to fund its electronics recycling program. Canada has adopted eco fees for electronics in a handful of provinces.

Shelagh Kerr, CEO of the Electronics Product Stewardship Canada, which handles the eco fee funds in Canada, gave a brief overview of the program. Fees are determined by a formula and vary by province.

Kerr said roughly 30 percent of the products returned through the stewardship program are orphan devices from manufacturers that no longer exist in the market. Disposal of those devices is subsidized by fees paid on products made by current manufacturers. In that way, the fee paid is not always associated with managing the product it’s paid on.

“It’s associated with 20, 30, sometimes 40 years of neglect, and you have a social issue that needs to be addressed,” she said.

Although the eco fee downsides include consumer perception that the fee is a tax, which can make it politically difficult to implement, Kerr noted that efforts in Canada have been able to surmount that barrier. She said an eco fee program demands a robust public education campaign, which in Canada has included advertising, in-store leaflets and more.

“By and large, consumers do differentiate between the (fee) and a tax,” she said.

Kerr concluded that a successful eco fee program needs other fortifying measures. Municipalities need to adopt landfill bans to ensure the products are returned, she said, and they need to conduct landfill audits to verify compliance. Communicating the diversion results to the public can build trust in the program.

“It keeps (the consumer) on board that the money they’re spending is actually having a positive net result,” she said.