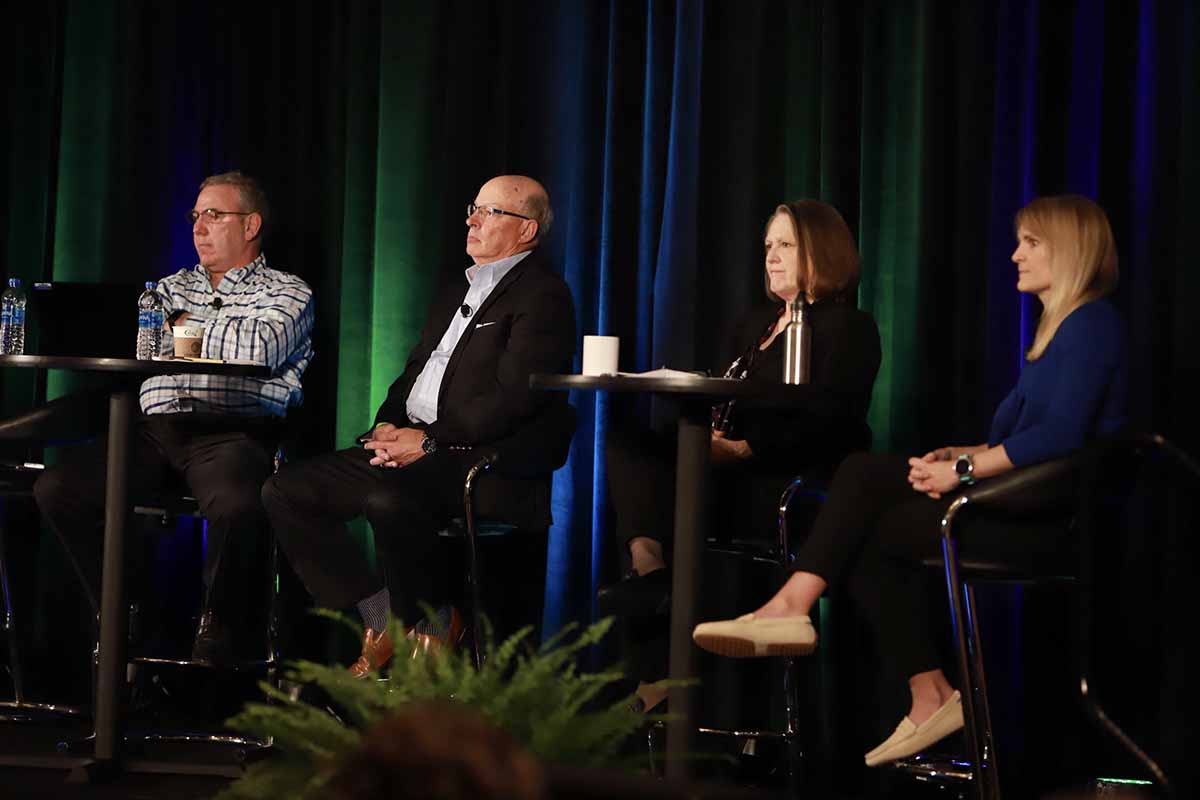 Speaking during the “Tensions in Recyclability Labeling” session at the Plastics Recycling Conference were (from left to right) Erik Grabowsky of Arlington County, Va., Steve Alexander of the Association of Plastic Recyclers, Heidi Sanborn of the National Stewardship Action Council and Karen Hagerman of the Sustainable Packaging Coalition. | Brian Adams Photography/Resource Recycling, Inc.

Consumers are confused and frustrated by recycling label systems in the U.S., and it will take a group effort to fix the problem, panelists told Plastics Recycling Conference attendees.

During the “Tensions in Recyclability Labeling” session at the 2022 Plastics Recycling Conference, which was held in March near Washington, D.C., four panelists talked about the current state of recycling labeling and what needs to be done to improve it.

Heidi Sanborn, executive director of the National Stewardship Action Council, said she’s been “saying for over 10 years that we’ve got problems with this stuff and we’ve gotten basically crickets.”

“The [Consumer Brands Association] did a report and itself said that it’s more confusing to people to recycle than it is to do their taxes or understand their spouse, or put together Ikea furniture,” she told the roughly 250 session attendees.

The disconnect in labeling, specifically items with the chasing arrows symbol that were not really recyclable, is where the recent truth-in-labeling legislation in California stemmed from, Sanborn said.

Steve Alexander, president and CEO of the Association of Plastic Recyclers (APR), agreed that “we do a great job confusing the consumer. We do a terrible job of cleaning up the stream.” (APR owns Resource Recycling, Inc.)

He said consistency was needed across the board, and while recyclers do need a code to tell what the material is, consumers need their own set of instructions.

“The consumer needs confidence that what goes in their bin actually gets recycled,” he said, and that confidence has been dropping.

“The [Consumer Brands Association] did a report and itself said that it’s more confusing to people to recycle than it is to do their taxes or understand their spouse, or put together Ikea furniture.” – Heidi Sanborn

Karen Hagerman, director of the Sustainable Packaging Coalition, said the organization developed the How2Recycle label to meet the desire for a consistent and standard label.

“Brands have been taking that on board and really working to not only make their packaging more recyclable but to be more transparent,” Hagerman said. She added that brands are also using a “not yet recyclable label” to communicate “that they understand this isn’t recyclable and they don’t want to fool people into thinking it is recyclable.”

The label also provides feedback to brands, she said, allowing them to make changes to improve recyclability.

However, Alexander said the How2Recycle label has contributed to higher contamination rates and lower recycling rates.

“In some ways, you could say it simply allowed for virtue signaling by the brand companies,” he said. “We know that if a brand gets the How2Recycle label with detrimental features there is no incentive to clean up those features.”

Brands will often come to APR and ask for guidance on how to get the label, not on how to make its packaging most recyclable, Alexander said. But he thinks the process, and label, can be tweaked into a better form.

“I think we’re going to be able to work on that. The label needs to be successful,” he said. “We need to work with them on it instead of just criticizing them.”

“In some ways, you could say it simply allowed for virtue signaling by the brand companies.” – Steve Alexander, on the How2Recycle label.

As is currently happening in California, Sanborn warned that litigation around labeling is going to keep ramping up and “brands are losing in court.”

“We’ve got to all work together to get a labeling system that works for the public. They’re extraordinarily frustrated,” she said.

Adding that “people are not going to read a phonebook in order to figure out how to recycle,” Sanborn said the labeling solution needed to be “simple, simple, simple” and ideally implemented at the national level for ease and consistency.

Erik Grabowsky, Solid Waste Bureau chief for Arlington County, Va., said using graphics and images over written recycling instructions is key. Pictures don’t need to be translated into different languages, and “when you start talking about plastics No. 1 through 7, people’s heads start to spin and catch on fire,” he said.

Consistency is also vital. Over the pandemic, local MRFs started changing what materials they would take, and Grabowsky said that was very difficult for people to adapt to.

“We want consistent messaging because it is really hard to turn that boat when you have a community of 33,000 or 100,000,” he said. “To say, ‘Here’s the messaging this week. Oh, it changes next week,’ it just doesn’t happen.”

“When you start talking about plastics No. 1 through 7, people’s heads start to spin and catch on fire.” – Erik Grabowsky

And from the consumer perspective, “they just want something convenient,” he added.

Sanborn said she’d like to see California’s legislation used as a basis for other states, or, ideally, a law at the national level, and by 2025.

“They don’t operate at the state level. They operate within regions,” she said. “We’re talking about the United States in this conversation. That type of consistency is what brands are looking for.”