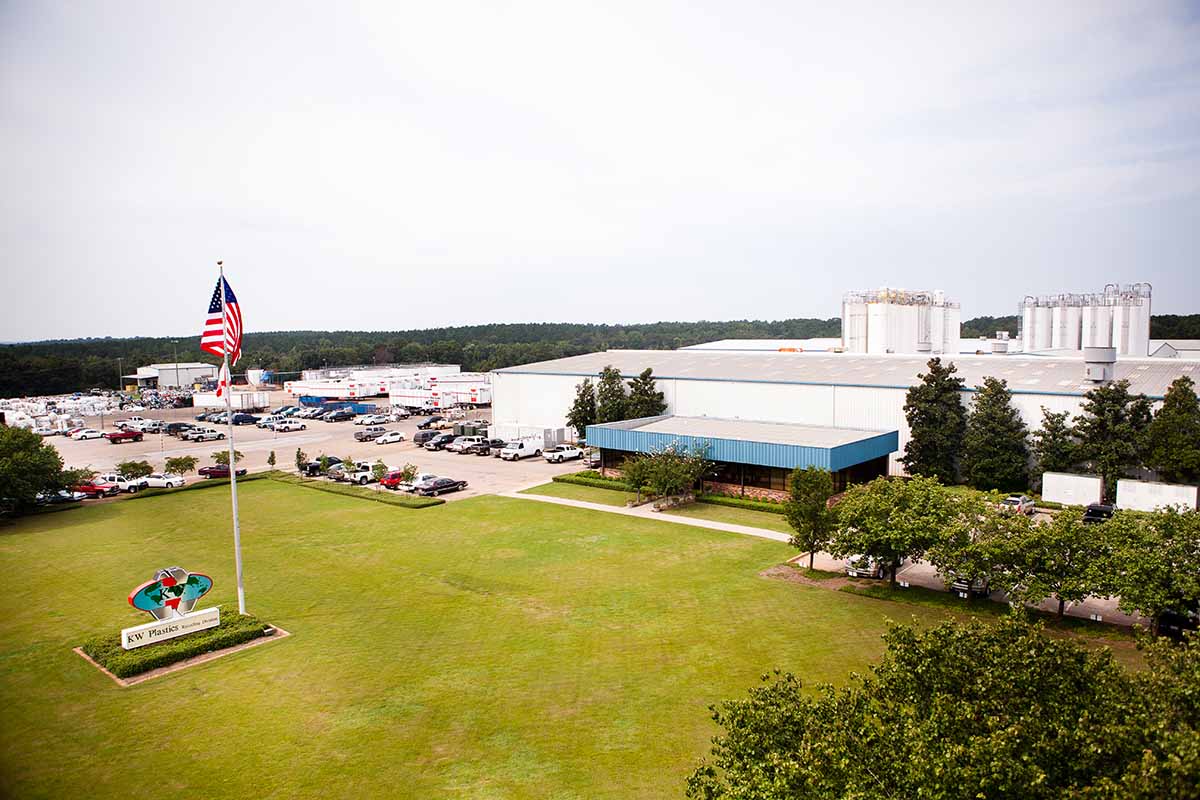 Snarls in global supply chains are impacting recycling equipment providers and plastics processors, including KW Plastics, in a number of ways. | Courtesy of KW Plastics

Equipment manufacturers and their customers are feeling the pressure of extended lead times and supply chain backups, forcing them to adapt as demand soars and supply dwindles.

“I’ve never seen anything like this before,” Pieter van Dijk, president of Van Dyk Recycling Solutions, told Plastics Recycling Update. “Not only is the supply a problem, but the demand has just gone through the roof. Our sales are double what they used to be.”

Any orders today for the manufacturer’s larger systems have a 2023 shipping date, van Dijk said, though the company can still fulfill smaller orders in 2022.

The delay is caused by an interlocking series of issues: COVID-19 outbreaks have shut down or slowed down overseas production, especially of electrical components, while ocean transportation logjams have made shipping expensive and unpredictable.

Meanwhile, the cost of raw materials, especially steel, has skyrocketed due to demand and Russia’s war in Ukraine. Added to that is a tight U.S. labor market leaving producers short-staffed.

Scott Saunders, KW Plastics general manager, said over the summer the delays he faced were “pretty severe.” Based in Troy, Ala., KW is the largest plastics reclaimer in the U.S.

Saunders described the last several years as “just an avalanche of calamities.”

Saunders said his company was delayed six months in receiving electrical components that it purchased. “Not all components, but like one or two pieces where a control panel couldn’t be finished, that type of thing,” he said.

A new wash line was also scheduled to be operational in June, but it wasn’t ready until November.

“It creates a lot of problems, being that much delayed on spare parts and ordering new equipment,” he said. The company had started talking about ramping up buying and had let customers know there would be more material available. While they had built in wiggle room of a few months, the delay was far longer than expected, Saunders said..

Sunil Bagaria, president of plastics reclaimer GDB International, said there was a delay of over six weeks for machines he purchased. Two of the three will arrive in April; however, he said it wasn’t that bad, compared to what it could have been.

“We had ordered the machines last year, when things were not that bad. If we were to order the machines now, there is a wait for 12 months or more,” he said.

“I’ve never seen anything like this before. Not only is the supply a problem, but the demand has just gone through the roof. Our sales are double what they used to be.” – Pieter van Dijk, Van Dyk Recycling Solutions

In Minnesota, Bill Keegan, president at recycling company Dem-Con, said his materials recovery facility (MRF) ordered five roll-off trucks in October 2021. They were originally slated to be manufactured in March 2022, which was already a longer lead time than usual, he said. Then, four of the trucks were pushed back to a May manufacture time, and the fifth truck to October.

“Basically a 12-month lead time for production. We’ve never seen those kinds of delays,” he said.

Tractors for pulling his longer trailers are even more behind, Keegan said. He ordered three in October 2021, and the first available slot for manufacturing was the fourth quarter of 2022 – if that doesn’t get delayed, too.

“That was the only vendor that had any slots open in 2022,” he said. “We didn’t even get to choose among vendors. They said we are totally booked out, in October 2021.”

And roll-offs for trucks are taking 10 to 12 weeks, instead of the usual two to four, Keegan added.

On the manufacturing side, delays with vendors and parts, as well as high transportation and material costs, all contributed to the “classic snowball effect,” said Philip Dodson, director of supply chain at recycling equipment provider Bulk Handling Systems (BHS).

“We manufacture equipment, but we purchase equipment as well, so the issues were definitely internal and external as far as production goes,” Dodson said.

The last two years were “the perfect storm” of logistics and transportation breakdowns, labor force shortages and being unable to get parts in a timely manner, he said. Dodson said he’s seen electrical lead times of six months to a year, and a lot of motors that used to have a six-week lead time are now four months.

“I’ve never seen anything quite like this at once,” Dodson said. “There have been little things here and there – when the tariffs got raised from China years ago or the recession of ’08-’09, stuff like that – but getting hit from multiple directions? No.”

Van Dijk said his company’s $19 million inventory of spare parts kept them from feeling the pinch early on, but “now it’s definitely affecting us.” However, the real pressure for Van Dyk is in sourcing electronics.

“Siemens is just out,” he said. “They just tell you to go elsewhere.”

Electronics are crucial to recycling equipment. A single missing switchboard component, for instance, means the rest of the system can’t be tested, van Dijk said, because even “if you have 95% of the material you still can’t test it.”

“I’ve never seen anything quite like this at once. There have been little things here and there – when the tariffs got raised from China years ago or the recession of ’08-’09, stuff like that – but getting hit from multiple directions? No.” – Philip Dodson, Bulk Handling Systems

Mike Whitney, vice president of operations for equipment provider CP Group, said over the past six or eight months, he’s seen parts get harder to find, lead times jump and “pricing going up like crazy.”

“We’re trying to book into next year and even the following year, if possible, but it really depends on the customer’s situation,” he said. “We will do what we can and add resources or whatever we need to do to try to meet the needed lead times.”

Ashley Davis, CP Group’s director of sales and marketing, said the company has also been busier than ever before, which compounds the challenge of supply chain delays.

“We’ve had challenges but we’ve also been able to find solutions,” she said.

As the supply chain upstream of BHS was disrupted, “it disrupted everyone else downstream,” Dodson said, but over the last few years he said the company has adapted. Now, it’s largely able to make its deadlines, and “lead times for our customers are not getting longer because we have supply chain issues.”

“We have to be creative and really do a better job of forecasting and planning ahead than we did in the past,” he said.

Van Dijk said with his company’s large inventory, it can still supply customers with the parts they need. The company also bought steel in advance in Europe, which has allowed them to stay on track.

“We were OK, but now we’re tight and with the war, it’s got increasingly more difficult,” he said.

Van Dijk said that as Ukraine is a top-five supplier of many steel products, the recent war with Russia has driven steel prices even higher, and sometimes “suppliers don’t even want to give a price.”

Dodson said for certain types and grades of steel, the price has increased five- to 10-fold in the past 18 months. Along with high demand, Dodson said there’s been a bottleneck effect as sourcing changes.

“A lot of raw material comes from overseas,” he said. “Of course, everybody tries to source domestically where we can, but there are no new mills for steel opening in America. When you shut off one source in an overseas country, even if you’re not buying from that source, the pool gets smaller. There’s more competition for resources.”

“It’s just having contingency plans,” he said. “Even if we’re not getting away from our primary vendors, just having more options and the ability to pivot a little more has been important.”

Different departments have also been working together to become more prepared “to handle supply chain issues and meet manufacturing needs a lot easier and with a lot less stress,” Dodson said.

“We’re trying to book into next year and even the following year, if possible, but it really depends on the customer’s situation. We will do what we can and add resources or whatever we need to do to try to meet the needed lead times.” – Mike Whitney, CP Group

Van Dijk said he has started slowly purchasing material the company will need for 2023 orders,”but there are also limits on that” because “if everybody starts doing it, it only becomes worse.”

CP Group has increased its parts inventory by about several million over the past few months, Whitney said, with a focus on the electrical components that are hard to come by.

“It’s not the board or driver themselves we can’t get, it’s components that go into those pieces that have been hard to get,” he said. “So we’ve had to design around it for some parts of components that we never even had to deal with before because they were already installed in the electrical components.”

Customers adapting to the new normal

Customers have also learned to look ahead and estimate what they’ll need in the future.

Keegan, with Dem-Con, said while he’s not in the residential hauling business, he’s heard others that collect household recyclables say that because of lead times they now need to anticipate what contracts they may be getting and order the trucks in advance of signing the paperwork.

“Before, you’d get a job, then order the trucks for it and have them in time to start services,” Keegan said. “Now, it’s ‘I’ll order five new trucks and hope between now and then I find the business.’ It’s very challenging.”

For Keegan, the delays have meant having to take a pass on work because he can’t get the needed equipment.

“The business is there to be had, but we don’t have the resources to do the job,” he said. “Those resources are labor and equipment.”

Dem-Con has been retrofitting older equipment that was out of service, and also ordering equipment “on a little bit of a hedge that we think we’re going to get future opportunities to put them to work,” Keegan said.

Even retrofitting older trucks has been a challenge because parts are short and the manufacturers that would normally do retrofits are trying to keep up with new orders. Keegan said he’s had to find smaller, local fabrication shops to do the work.

KW’s Saunders said he thinks the backlogs and challenges will persist.

“Even if business were to slow down, you’ve got a year’s worth of orders for equipment,” he said. “These equipment guys aren’t going to be wide open for at least a year, even if they stop getting orders now.”

Keegan agreed, and said the problem is coupled with the labor shortage.

“They go hand-in-hand,” he said. “Not only is it challenging to get the trucks, but then I don’t have drivers. Using your old trucks and old equipment, we can’t find the mechanics to maintain it and they require more maintenance.”

Dodson said logistics are another sticking point that will take time to work through.

“That’s where a lot of the delays are, getting things moved through ports and customs on either side of the water,” he said. “That’s been one of the big delays for us directly and even some of our vendors. They say, ‘Yeah, we have parts, but they’re in a container in the ocean and we don’t know when exactly we’ll get them.'”

Both Dodson and Keegan said the silver lining is that even with those challenges, the demand is there.

“The good news is the work is out there,” Keegan said. “We’re seeing a strong robust demand for our services and the industry. We just have to continue to work at getting those resources.”

A version of this story appeared in Resource Recycling on April 5.