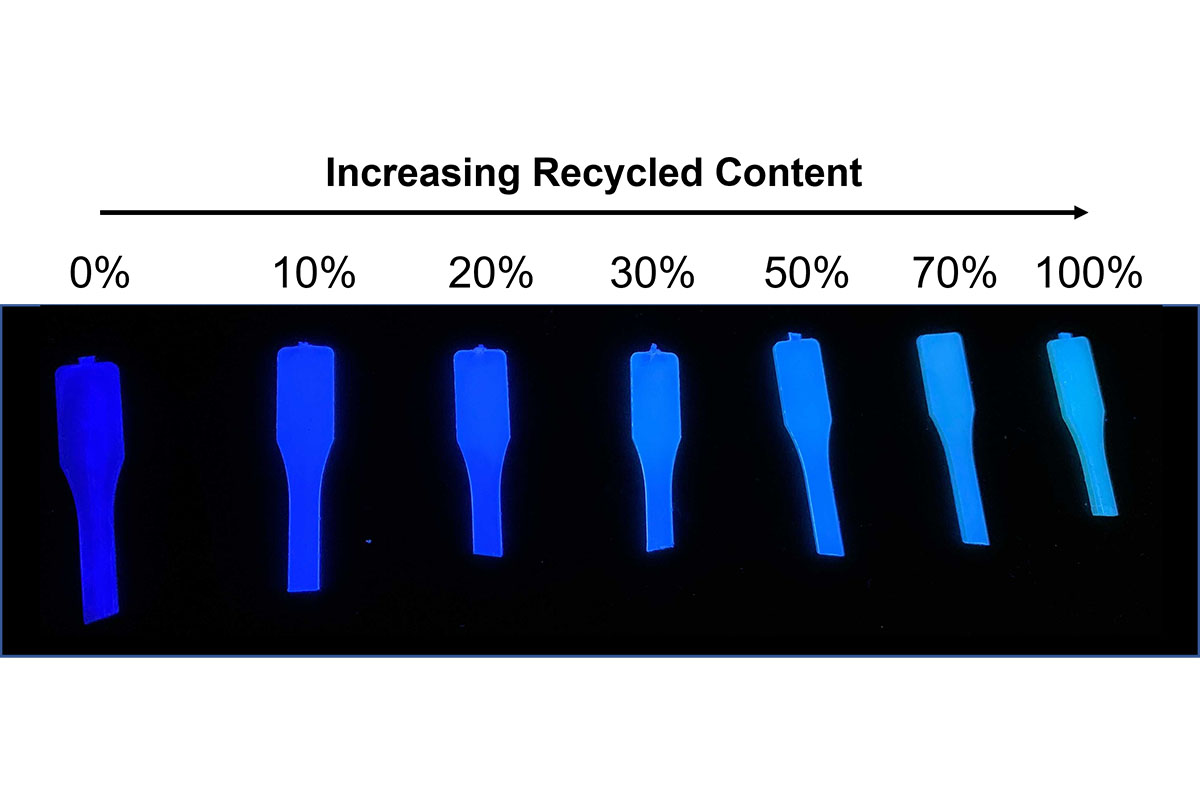 Rising prices for post-consumer resin also bring a greater incentive for shady suppliers to cheat. A U.K. nonprofit is commercializing a technology that will detect lies about recycled plastic use.

First developed at the University of Manchester in the U.K., the technique uses an additive and fluorescence spectroscopy to analyze the recycled content of plastic articles. A not-for-profit company spinning out of the university, ReCon^2, is working to further develop the technology and get it out into the plastic packaging marketplace (ReCon^2, pronounced ReCon squared, stands for “Recycled Content Reconnaissance”).

Mike Shaver, a professor of polymer science at the University of Manchester and one of the inventors of the technology, said the driver for it started with concerns about the validity of recycled-content claims in packaging, particularly with greater economic and societal pressures to increase recycled content.

“The technique uses an additive to give different fluorescent spectra as it is included as recycled content during processing,” explained Shaver, who is a director for ReCon^2. Fluorescence spectroscopy allows this change to be analyzed to deduce the recycled content.

It’s perhaps counter-intuitive, but the approach doesn’t simply measure the brightness of the fluorescence as an indicator for the concentration of the additive in the plastic product. Shaver explained that the spectrum changes as the recyclate is incorporated. This means a reclaimer would generate a masterbatch with a traceable concentration. This fluorescence signature can be tracked all the way through to the final product to be compared when recycled-content claims are audited, he said.

The additive is an FDA-approved molecule that has been used in food-contact packaging in the past, Shaver said. The verification process has been confirmed for PET, HDPE and PP, he said, and it can quantify from 5% to 100% recycled content with high accuracy. The spectroscopy equipment is relatively inexpensive, meaning it would be easy for a testing lab to quickly adopt, he said.

And the way the innovation works, it would be very hard to fake, Shaver said.

“The unique nature of the innovation means that quantification can be made using multiple techniques,” he said. “The layering of these different detection methods makes fraud more difficult, but also gives more accurate and precise results across a range of packaging plastics.”

Strategy for getting it into the marketplace

The technology could prove particularly useful in the U.K. where the government is set to begin imposing a plastic packaging tax of 200 pounds sterling per metric ton ($272) starting April 1, 2022. That equates to over 12 cents per pound at current exchange rates. But the tax only applies to manufacturers and importers of plastic packaging that contains less than 30% recycled plastic, according to HM Revenue & Customs.

In the U.S., California, Washington state and New Jersey have recently passed laws mandating PCR be used in certain plastic products. And the Canadian federal government is planning to draft regulations requiring recycled plastic be used in a variety of products.

The technology is being pushed into the marketplace by a not-for-profit organization, rather than a for-profit company, because that approach is more likely to ensure widespread adoption, Shaver said.

“We had to show that the impact would be greater if we were a not-for-profit because of the trust that that affords in those supply chains,” he said.

Plastics reclaimers and the brand owners would both have an audit relationship to ReCon^2, which would act as a “shepherd in between to help make sure that everybody is doing things fairly.”

Shaver said ReCon^2’s plan is to ensure participants pay less than they would when using mass-balance accounting, a chain-of-custody approach, to gauge recycled content.

“The team are also looking at how the technology can underpin a Trust Mark certificate, with an on-pack label indicating the recycled content in order to rebuild public trust in plastic packaging,” he said.