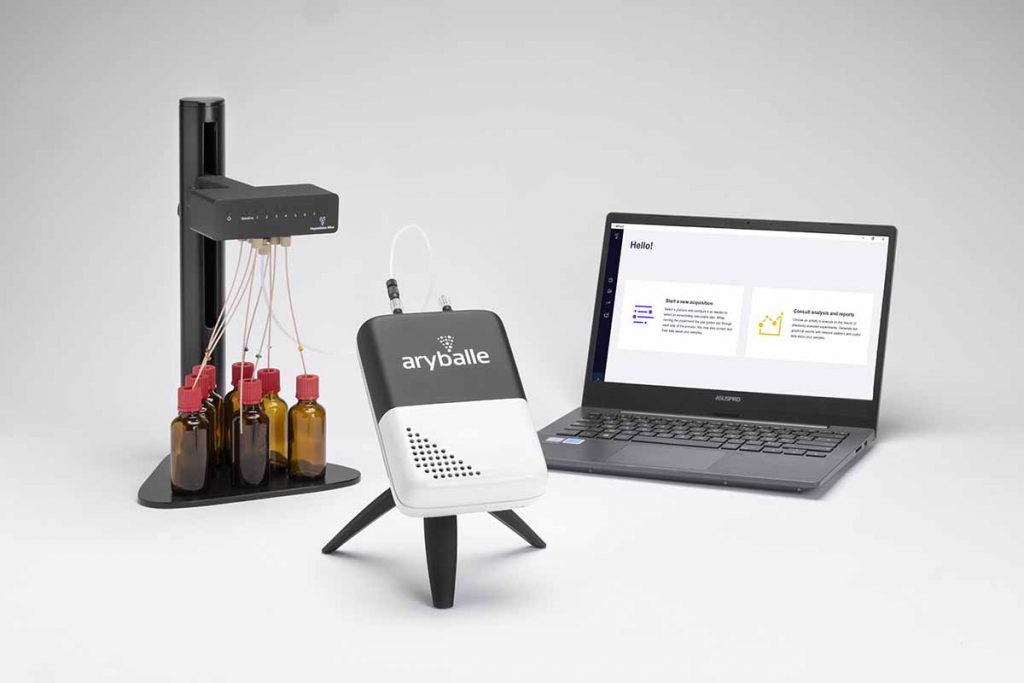 “With the OEM odor standards, we want to make sure we are easily able to use recycled products,” said Samantha Cronin, marketing communications manager for APNA. “This could potentially be a way to identify material that can go in our products while meeting the automotive emission requirements.”

AI is already used in materials recovery facilities (MRFs) and plastics recycling plants to sort scrap plastics. In those cases, cameras are used to record images of items on a conveyor belt, and AI software compares their visual characteristics to images in a massive database to quickly categorize them so they can be properly sorted by a robot or optical sorter.

But instead of eyes, the technology from Aryballe, which was founded by biochemists in 2014, replaces the human nose. In an interview with Plastics Recycling Update, Fanny Turlure, global product manager at the Grenoble, France-based company, noted that different humans experience smells differently, and sense of smell can be impacted by sickness and runny noses.

Aryballe’s technology uses a small device to capture smells, generally over a period of 5 to 10 seconds. The readings are converted into a unique signature, and AI-powered software then matches the signature with odor signatures in a database, she explained.

The goal is to track odors in a traceable and transparent way, Turlure explained.

“There’s already a number of use cases where you can use this type of technology,” she said, especially evaluating using recovered materials to create desired scents in fragrance products. The technology can be used by the fragrance industry to replace panels of human testers, she said.

For the automotive industry, odors are a big part of the experience for the consumer. Hyundai Motor America faced a class-action lawsuit earlier this year because of four odors in its Palisade SEL and Limited trim models. The odor, compared to garlic and rotten eggs, was ultimately traced to the headrest. The lawsuit has since been dismissed.

Hyundai, incidentally, was one of the companies that invested in Aryballe over the past few years. Business Korea reported the company put 1.16 million euros into Aryballe.

Turlure noted that using recycled plastic is huge in the automotive industry, and Asahi Kasei Plastics has goals for producing recycled resin for use in auto components. Part of Japanese chemical conglomerate Asahi Kasei, APNA produces compounds for use in a variety of durable goods.

Cronin said APNA is “evaluating it as a screening tool to get more information on the recycled material when it arrives.”

She noted that as demand for recycled plastic grows, APNA is less likely to have consistent streams.

“Supply will be sparse and when there are recyclers competing for the same feed stream, we may not always get recyclables from the same sources,” she said. “The recyclers themselves may have trouble securing supply.”