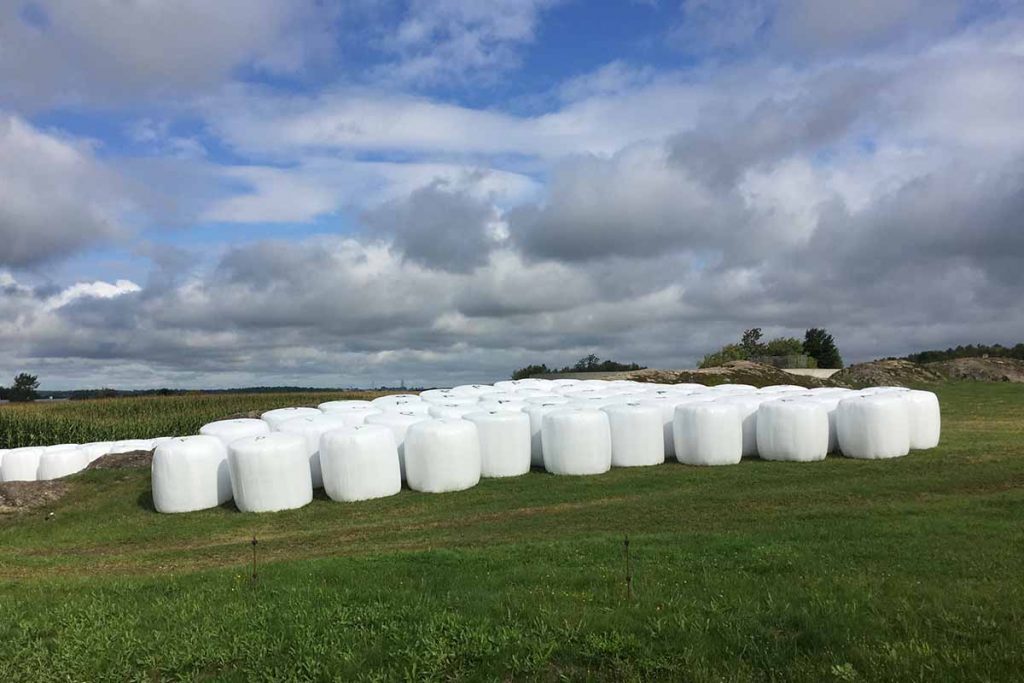 Plastic bale wrap used to store livestock feed, such as silage, is now being collected for recycling through a Cleanfarms pilot program. | Photo courtesy of Cleanfarms

An analysis of agricultural plastic recycling in Canada found that there’s plenty of room for growth.

The study from stewardship group Cleanfarms estimated Canadian farms generate nearly 62,000 metric tons of ag plastics annually. Of that, about 6,000 metric tons, or around 10%, are diverted through recycling/disposal programs operated by Cleanfarms, the study estimates. The rest are reused, disposed of on the farms (including burning or burying), returned to the vendors or sent to landfills.

The result of 18 months of research, the “Agricultural Plastic Characterization and Management on Canadian Farms” report was delivered to Environment and Climate Change Canada, the federal government’s environmental protection department that helped fund the research. Created by Cleanfarms with assistance from Envise Consulting, the document was published in August.

The analysis found that over half of the generated plastics are located in the Prairie Provinces (Alberta, Saskatchewan and Manitoba). About half of ag plastics are LDPE, 14% is PP, 11% is mixed plastics, 10% is PS, 10% is HDPE and smaller percentages are other resins.

The document found much of the non-recycled material could be captured by expanding existing programs or starting new ones.

“An analysis of current recycling systems showed that a significant portion of ag plastics (e.g. LLDPE Wrap, LDPE Silage Bags and Bunker Covers and PP Woven Bags) could be diverted through the expansion of systems already in place or in pilot phases,” according to the report. “New program development is likely required for items like propagation trays (although significant reuse occurs amongst users) and net wrap.”

“Further investments in technology and policy development will also be required to increase the overall amount of ag plastics diversion,” the document added.

For three decades, Cleanfarms has operated a Canada-wide program that recovers HDPE containers and drums that hold pesticides and fertilizers. In 2020, the program recovered an estimated 76% of empty containers.

More recently, the group has launched collections of other materials in specific provinces. It also has a Saskatchewan program collecting grain bags. Collected weight has grown from 1,257 metric tons in 2018 to 2,536 metric tons last year.

Cleanfarms also has programs to collect bags and other types of films, twine and netting in other provinces.

In an interview with CBC News about the new report, Cleanfarms Executive Director Barry Friesen noted that his nonprofit organization’s ag plastics collection weight has increased three-fold since 2015. He said he’d like to see the percentage collected jump to 50% or more in the next five years to a decade.