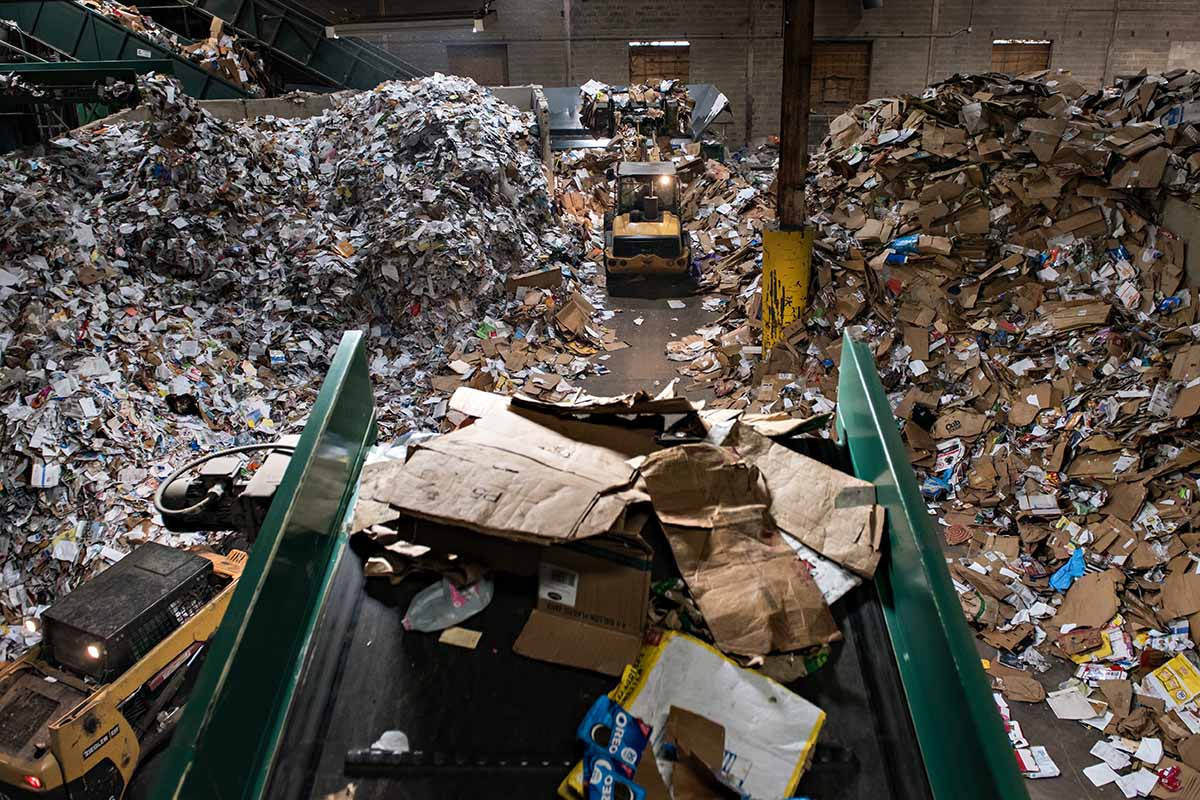 Eureka Recycling, one of the founding members of AMBR, operates a MRF in Minneapolis. | Photo credit: Mark Kegans

Four organizations that run processing facilities recently created the Alliance of Mission-Based Recyclers to advocate for recycling and zero waste policies during a period of “systemic changes.”

The Alliance of Mission-Based Recyclers (AMBR) this month announced its launch, with organizations in four states as founding members: Eco-Cycle of Boulder, Colo.; the Ecology Center of Berkeley, Calif.; Eureka Recycling of Minneapolis; and Recycle Ann Arbor of Ann Arbor, Mich.

The organizations have known and worked with each other for decades, but in recent years that work has ramped up with strategizing and coordinating on policy advocacy and other efforts. Now, they feel the recycling sector is in a critical moment where their shared voices can have an impact, two AMBR leaders said in an interview.

“There’s much more attention and opportunity around zero waste solutions to the climate crisis, to the social justice problems we’re facing, to the plastic crisis,” said Lynn Hoffman, co-president of Eureka Recycling and national coordinator for AMBR. “There’s public attention on it. There’s political attention on it.”

Five years ago, she added, it was difficult to get a callback from national lawmakers to discuss recycling issues. Now, pieces of federal legislation tackling some element of the recycling system are introduced each year.

Kate Bailey, policy director for both Eco-Cycle and AMBR, said the nonprofit recycling operators are receiving more inquiries from various stakeholders and that it made sense for them to join together to speak from their unique place in the market.

“We’re definitely in this moment of time of big, systemic changes in recycling, so it felt like the right time to really stand up as mission-driven organizations and define what is the role of recycling, how do we recycle right and how can we help bridge to the new future,” Bailey said.

“There’s not many of us left,” Hoffman said. “There were lots of zero waste, mission-driven community recyclers back in the day. There’s other nonprofit recyclers, to be sure, but what links the four of us is we all have zero-waste missions, and we have operations on the ground.”

The organizations have a few main goals, one of which is to push for regulations that they say will drive the largest changes in recycling.

To that end, AMBR is focusing its policy advocacy on extended producer responsibility (EPR), container deposit systems and minimum-recycled-content regulations.

“Those are the three most important policy elements and they’re the greatest opportunity to drive that systemic change across recycling that’s needed right now,” Bailey said. “There’s, of course, lots of other supporting policies around eliminating problematic plastics, landfill bans, things like that that I think complement. But right now, you know, go big or go home, I recently said. That’s where we need to focus, is on those efforts.”

The group’s advocacy efforts will also include keeping an eye on policies its members feel are moving the recycling industry in the wrong direction, Bailey added. These include legislative proposals that pave the way for greater chemical recycling industry development, she noted.

Additionally, even within the three policies the organization supports, AMBR wants to ensure they are enacted properly.

“There’s a right way and a wrong way to do a lot of this, and I think a core element for all of us is, ‘recycle right,’ not just ‘recycle more,'” Bailey said. That means keeping a handful of additional factors in mind when crafting policies that aim to improve the recycling sector, Bailey said.

Kate Davenport of Eureka Recycling and the Alliance of Mission-Based Recyclers will be among the panelists on “The Evolving MRF Landscape,” a session set for the first day of the virtual Resource Recycling Conference in August. She’ll be joined by Brent Hildebrand of GFL Environmental, Palace Stepps of Sonoco Recycling and Maite Quinn of Closed Loop Partners. Find more about the event and register today at rrconference.com.

“Greater transparency and accountability, higher labor standards, really focusing on material quality,” she said. “Recycling is the foundation of the supply chain. It’s not something that we do to keep materials out of landfills. Material quality is something that all of us as MRFs put as a priority – that’s the kind of ethic we’d like to see standardized and regulated [at the] state level and national level.”

AMBR hasn’t taken a formal position on specific state EPR proposals, but Bailey explained how some of the recent stewardship bills offer an example of the nuance in how states enact recycling policies.

A packaging EPR bill approved by lawmakers in Maine has significant state government involvement, which may not be as viable in areas with less existing government involvement in recycling. In Colorado, where Eco-Cycle operates, there is a very limited local or state government role in the recycling sector, and recycling is largely centered on subscription access. The states that AMBR members operate in – California, Colorado, Michigan and Minnesota – offer a clear glimpse of the state differences.

“One of the challenges with recycling is it varies a lot by region of the country,” Bailey said. “We have that diversity well-represented in AMBR.”

Although the number of nonprofit mission-based recyclers has contracted, Hoffman sees a positive in the moment of national recycling focus, and that was one impetus for launching the advocacy group.

“There’s definitely a growing interest in the elements of mission-based recycling that communities want to embed in programs,” Hoffman said.

AMBR hopes to spread its members’ values to a wider portion of the recycling industry. It’s not advocating for every community across the country to have a nonprofit recycling operator, or for thousands of small, independent MRFs in the U.S., Hoffman said. Additionally, AMBR’s members do not have growth strategies where they want to be franchising around the country.

“What we want to do is leverage what we’ve learned, what our best practices are, what our experiences are, and share them in a way that communities can implement,” Hoffman said. “You don’t have to have a small nonprofit hauler in your community to ask for good reporting, or to have transparency around end markets, or some of these other really important pieces that the National Sword really highlighted, like, oh yeah, just because someone somewhere buys it doesn’t necessarily mean something good happened to it.”

A version of this story appeared in Resource Recycling on June 28.