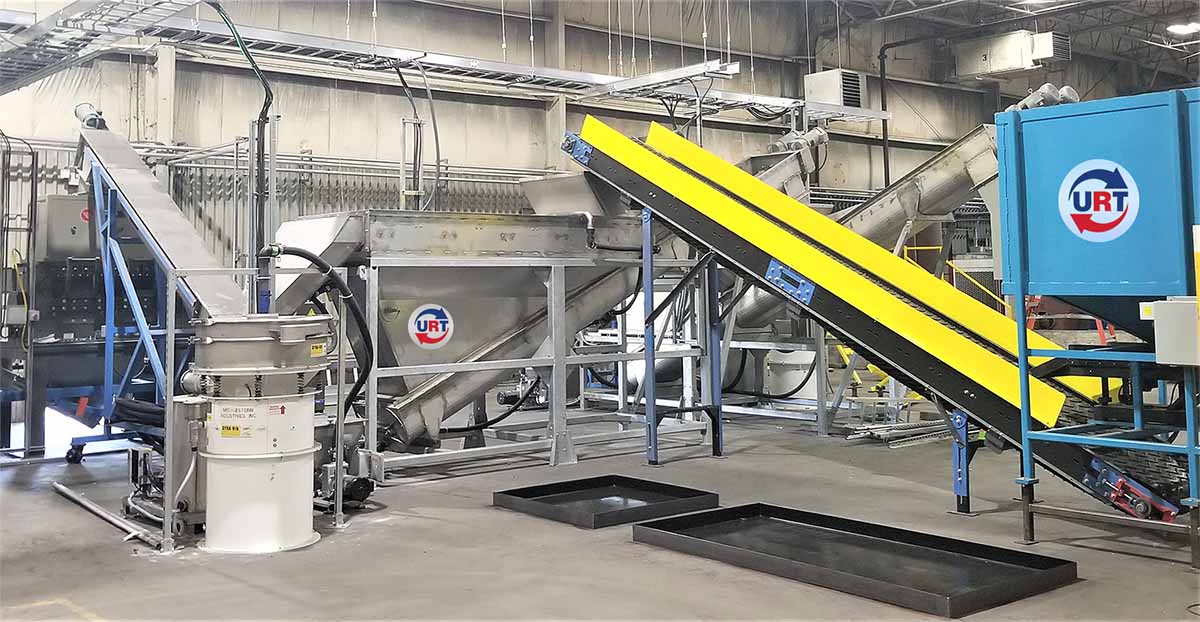 With a capacity of 6,000 pounds per hour, URT’s system was designed to handle the amount of shredded e-plastic generated in URT’s Janesville, Wis. plant on a single shift. | Courtesy of URT.

URT has installed equipment at its Wisconsin headquarters allowing the electronics recycling company to produce clean e-plastic fractions for sale to domestic buyers.

The million-dollar-plus investment from Universal Recycling Technologies (URT) included a system with float-sink tanks. The equipment is able to sort plastics by polymer and flame retardant content, as well as recover any metals missed by earlier separation equipment.

“We saw an opportunity in the market and wanted to provide a stable and domestic e-waste plastic solution for our customers,” Jim Cornwell, URT’s founder, stated in a press release (Cornwell retired from his position as company president on Jan. 8, and URT’s vice president of finance, Ken Thomas, became president on Jan. 9).

In an interview with Plastics Recycling Update, Jeff Gloyd, URT’s vice president of sales, explained that URT began looking at such a system three years ago, as China began implementing scrap import restrictions.

As a result of China’s moves, many Southeast Asian countries became flooded with shipments of scrap plastic, often overwhelming ports, galvanizing environmental activists and prompting government crackdowns on imports. At the same time, the price of e-plastics dropped steeply.

URT seems to have nailed the timing, he said, noting that an amendment to the Basel Convention is set to go into effect in two weeks, on Jan. 1, 2021. The amendment is expected to lead countries to tighten controls on international shipments of scrap plastics, although much uncertainty about the exact impact remains.

In the press release, Gloyd said the system “allows URT to own our destiny related to plastics recycling. This helps us stabilize value, which, in turn, helps us better service our diverse base of customers.” Product outputs from the sorting system will be sold exclusively to U.S. buyers, Gloyd said in the interview.

Only a handful of e-scrap recycling companies in North America have plastics cleanup systems like URT’s. Some have gone in recently. As examples, Canadian processor eCycle Solutions installed a $1.5 million system earlier this year, and global company Sims Lifecycle Services installed one in La Vergne, Tenn. last year. The companies said tightening trade regulations factored into their capital investment decisions.

How the sorting system works

The saleable outputs include dried granulated PS, ABS, PE and PP, according to the release. Without using electrostatic separation or plastics-focused optical sorters, there will still be some mixing in those fractions, but the system’s level of sorting “does give us that opportunity to open more downstream markets,” Gloyd said.

Gloyd said the company hired half a dozen employees to operate the e-plastics system. During the first quarter of 2021, URT will test sorting the two-inch-minus plastic outputs of its e-scrap shredders in Clackamas, Ore., and Fort Worth, Texas, with an eye toward possibly adding a second shift on the e-plastic system so it can handle additional material.

In the future, URT could install additional e-plastics float-sink systems itself – or partner with others companies to do so – but those decisions haven’t been made yet. And while URT isn’t immediately planning to sort other e-scrap companies’ plastics, that service is possible in the future.

A version of this story appeared in E-Scrap News on December 17.