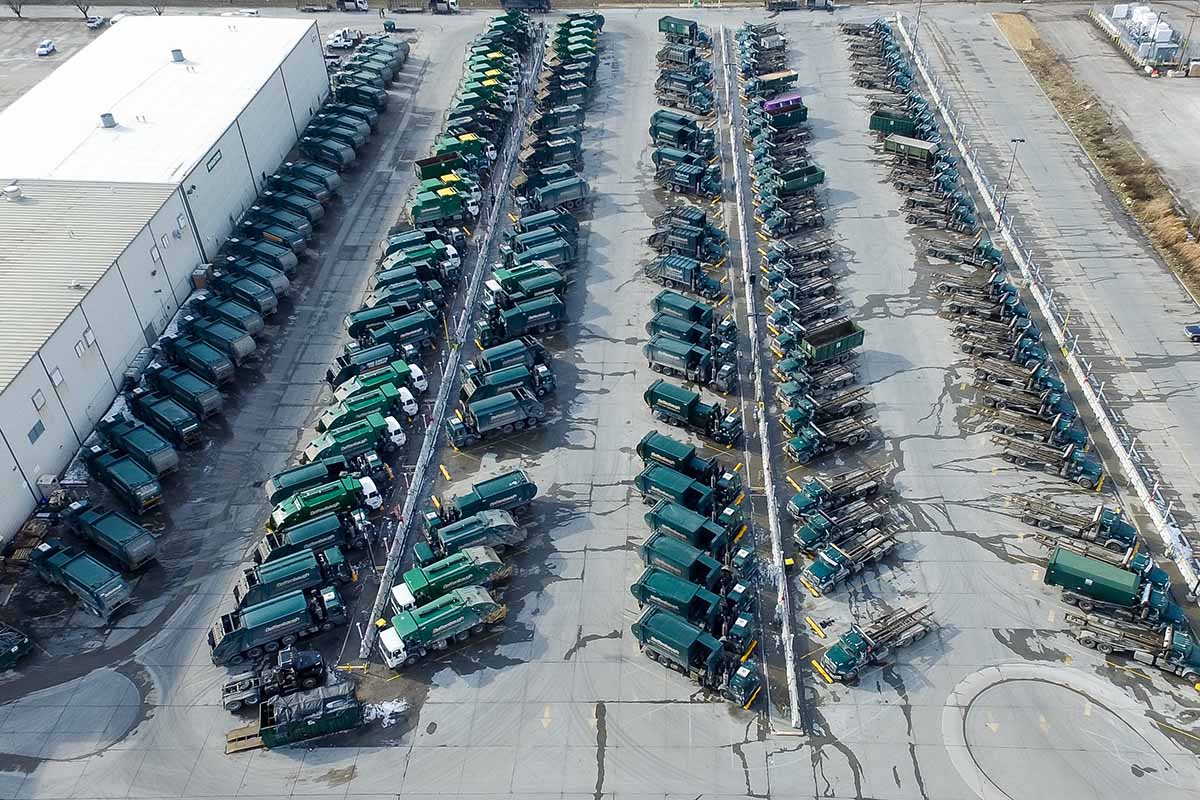 The largest hauler in North America processed a record amount of recyclables in 2019, and it invested more than $100 million to improve its recycling infrastructure, according to its latest sustainability report.

Waste Management, the Houston-headquartered garbage and recycling giant, detailed its recycling activities in the report covering 2019 and early 2020. The publicly traded company publishes a large report every two years and a shorter update on the off years. The last full report was issued for 2017 and 2018.

The report discusses the latest recycling tonnage figures, materials recovery facility (MRF) and other facility investments, market trends and COVID-19 impacts. It also includes information on the company’s push for diversity and equity in the wake of nationwide protests for racial justice.

Performance by the numbers

Specifically at its single-stream facilities, the company has seen an ongoing average contamination reduction over the past two years, from a high of 24% in August 2018 to 19% at the end of 2019.

The company’s role as the largest handler of post-consumer recyclables in North America poses “challenges and opportunities,” particularly in recent years with market shifts, the report states. Part of its response to those challenges is an emphasis on building up end-market demand.

“We continue to recognize – and communicate – that recycling happens not when a consumer places an item in a curbside bin, nor when materials are sorted and processed by Waste Management,” the company wrote. “In fact, the cycle is only completed when a material is converted into a new product. Closing this loop requires robust end-markets for recycled materials, which Waste Management remains committed to helping develop and promote.”

The Chinese-led global recycling market shifts have substantially impacted Waste Management. According to the report, by the end of 2019, Waste Management saw the average price of all commingled recyclables totaling “roughly 70% less than the average two years prior.”

“This resulted in increases to the cost of recycling for our customers, creating financial hardship for many municipalities,” the company acknowledged.

Additionally, the China market shift impacted how the company moves its recyclables. Since the Chinese import ban in early 2018, Waste Management has moved toward domestic management of its plastic, and currently all the company’s recovered plastic stays in North America, the report noted.

As part of the demand focus, the company highlighted several major recycled paper mill projects that are in the works and are “anticipated to have a stabilizing impact on paper markets in the U.S.” And the report pointed to major corporate commitments and goals to use recycled plastic as a positive sign for future recovered plastic demand.

Additionally, on the demand side, Waste Management noted its own efforts to increase recycled plastic consumption, particularly through its EcoCart project with Cascade Cart Solutions as part of the Association of Plastic Recyclers (APR) Demand Champion Program. Through this project, Waste Management purchased recycling carts made from 10% post-consumer resin. (APR owns Resource Recycling, Inc.)

Beyond China’s retreat in the global recycling market, Waste Management pointed to the COVID-19 pandemic as a significant influence on the world of recycling. Key products made from recycled materials became even more critical during the early weeks of the pandemic. This highlighted the importance of recycling as a key supply stream for manufacturing, the company wrote.

In an opening message, company CEO Jim Fish described “record investments” in the company’s recycling infrastructure. The company spent more than $100 million per year in both 2018 and 2019 in this space.

In 2019, this money went toward a variety of technologies to improve material quality. For instance, the company installed “cameras that identify contamination as soon as materials leave a truck and land on a MRF’s tipping floor; optical sorters that use air and cameras to sort up to 600 items per minute; robotics; and ballistic sorters that separate material by weight.”

These sorts of investments went into the company’s “MRF of the Future” in Chicago, according to the report, which laid out some details about what sets the facility apart.

The Chicago MRF has 16 optical sorters, a substantial departure from a typical MRF that has two such sorters, according to Waste Management. These sorters “interact with conveyor motors and other equipment within the facility to help improve material quality and eliminate downtime,” the report states.

This facility started operating last October, and when it hits full capacity it will be able to process 1,000 tons per day, according to the report.

“Its intelligent sorting capabilities will serve as a blueprint for future investments at other Waste Management facilities,” the company wrote.

Another investment example is the company’s efforts to increase recovery of polypropylene bottles, tubs and lids. Although these materials are “a very small portion of the overall recycling stream, they are growing in use and end-market demand,” the company wrote. “To support these markets, Waste Management invested in technology to maximize efficient recycling of these materials.”

COVID-19 was not the only major nationwide crisis to spark change within the company. As he did in the spring, Fish touched on the widespread movement for racial justice that intensified in late May. This push led to reflection within Waste Management, he said.

“In the aftermath of the death of George Floyd in Minneapolis, Waste Management’s Inclusion and Diversity staff activated a series of dialogues and programs to further inclusivity among all employees, and to facilitate constructive discussions in our workplaces,” Fish wrote. “We will continue to establish new cultural norms and to ensure consistent practices around education and equity, with goals established to guide this effort.”

The company had previously established inclusion and diversity as “fundamental values” and in 2019 increased representation of minority groups in all categories of the company, according to the report.

Waste Management has two inclusion-focused aspirational goals for 2025, the report states. The company aims to “achieve ethnic diversity in each segment of our workforce, with emphasis on leadership, that is greater than or equal to that of the U.S. workforce standards.” And it wants to “lead the industry in female representation at all levels, with a special emphasis on frontline and women in leadership.”

The report contains a detailed breakdown of the company’s workforce by race and ethnicity. Waste Management’s employee base is 54.6% Caucasian, 23.1% Hispanic, 18.6% African American, 1.6% Asian, 1.0% multiracial, 0.7% American Indian or Alaskan Native, and 0.4% Native Hawaiian or Pacific Islander.

A version of this story appeared in Resource Recycling on October 20.