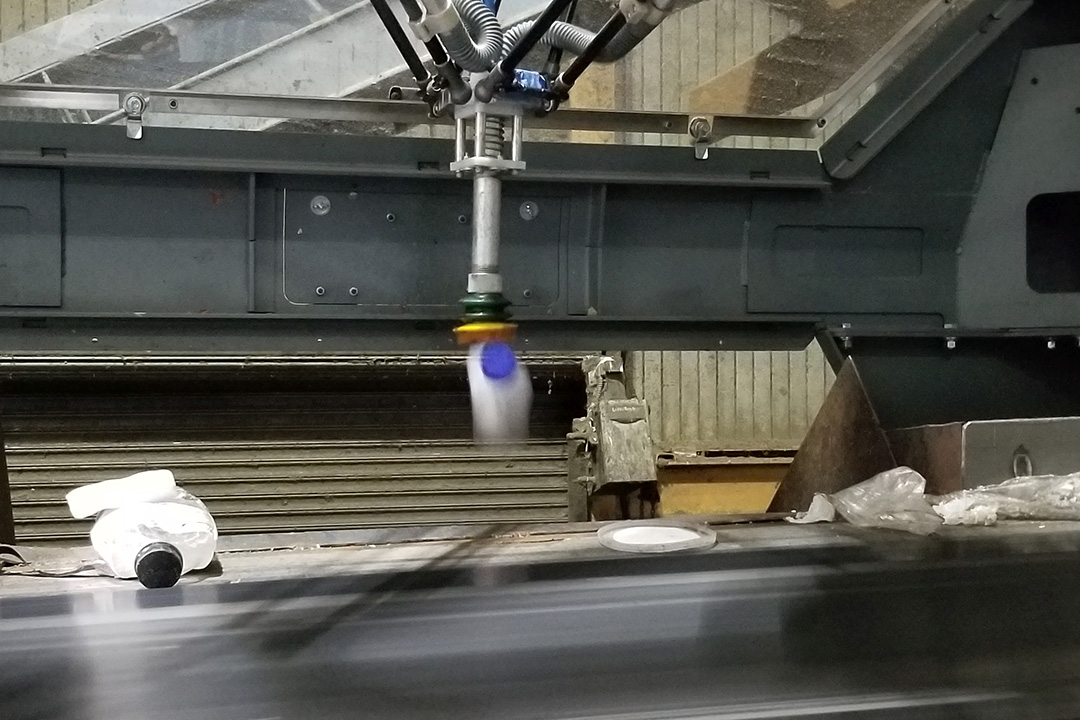 A West Coast operator installed four artificial intelligence units at its high-tech San Francisco materials recovery facility (MRF). A company manager explained how the machinery is working in conjunction with optical sorters to boost recovery and reduce contamination in PET and HDPE.

An employee-owned company, Recology provides garbage and recycling service to San Francisco and many other West Coast cities. Its Recycle Central MRF serves as a key cog in San Francisco’s recycling program.

In September, four Max-AI AQC (Autonomous Quality Control) robots were installed at the 200,000-square-foot sorting facility. The robots are just the latest upgrade for a MRF that has seen a number of improvements. Over the past three years, Recology has invested $20 million into the facility, said Robert Reed, spokesman for Recology. The MRF, which sorts about 600 tons per day, is now home to seven optical sorters.

In a recent interview with Plastics Recycling Update, Maurice Quillen, general manager for Recology San Francisco, explained how the new container-line robots are providing plastics-sorting backup for the optical sorters. The upgrade project came with a number challenges, which could only be overcome by contributions from three parties: Recology; the technology provider, Bulk Handling Systems (BHS); and a third-party MRF integrator, Titus MRF Services.

After the successful installation, the robots are cleaning up bales and recovering plastic that would otherwise be lost to residue, Quillen explained. The higher-quality products are helping Recology maintain its place in a buyers’ market.

Interdependence of robots and opticals

Crews installed one robot each weekend in September, and all four were operational by Oct. 1. The robots are all working on the MRF’s container line after the optical sorters. They are doing the following tasks:

In addition to the robotic sorting arms, BHS also installed a standalone visioning system, called “VIS,” for “Visual Identification System.” Quillen said the VIS is examining and classifying the MRF’s residue, providing waste characterization on materials destined for disposal (VIS is looking at residual from sorting equipment, not material manually removed in the presort area).

The VIS helps Recology determine the sorting equipment’s effectiveness, he said. For example, if it sees a lot of HDPE in residual, the operations group can circle back to the issue by working on the optical sorter for HDPE, he said.

In the months before the robots arrives, BHS installed a small visioning system to log what the robots would be needed to sort, Quillen said. That allowed the equipment to arrive nearly ready to go.

“When they were delivered, it was simply install the hardware and upload into them the data that they had acquired from the test period,” Quillen said.

When asked if that meant they “hit the ground running,” he agreed. “Not sprinting, but running, as opposed to crawling or jogging,” Quillen said.

Before the robots were installed, there was some concern they wouldn’t be able to handle the sorting burden they’d be facing, Quillen said. So, as part of the project, Recology also worked with Van Dyk Recycling Solutions to upgrade the facility’s Tomra optical sorters on the container line, Quillen said. The units, which were some of the earliest models, had their air bars and reader units replaced, he said.

“The engineer and I both knew that we were going to present these [robot] sorters with a challenging situation, but with the optical change out, it really made everything a little bit better,” Quillen said.

Given San Francisco’s geography and population density, it may come as no surprise Recycle Central, which is located on Pier 96, is short of free space. It also has a complicated material storage and baling system that can’t be easily moved.

“So for me to all of a sudden introduce a new commodity or move something around means I really have to get into some pretty significant infrastructure modifications,” he said.

The space constraints and inability to move the baler presented a challenge when it came to installing the robots. Recology hired Titus MRF Services to widen platforms to ensure required safety clearances where the robots were installed, Quillen said. BHS also did a lot of work re-engineering this generation of robots to have a smaller footprint, which was crucial to Reclogy installing them, he said.

Then came getting the robots into the building. Recology had to “peel back” the side of the MRF, he said. Titus installed a temporary gantry system to bring the equipment through the gap and then shuttle the equipment into position.

The constraints added to costs. In fact, Recology spent $670,000 on commissioning, $500,000 for installation, and $50,000 to close the hole in the side of the MRF. Those costs that totaled more than the robot equipment, which was $1.1 million, Quillen said (he noted that some of those numbers include 8.5% sales tax. The robot purchase was taxed, for example, but not commissioning expenses).

The first robot, the PET QC unit, is achieving about 65 picks per minute, which is close to 80% of what the manufacturer established as the maximum picks per minute under optimal conditions, Quillen said.

The other robots are performing fewer picks per minute, not because they can’t do more, but simply because they’re being presented with less material to sort, he said.

The plastics-sorting robots are being asked to look at a lot of different materials, including paper that gets into the container line and metals – Recycle Central removes ferrous and nonferrous metals after the plastics, Quillen noted.

Before the first robot was activated, Recycle Central had a lot of PET thermoforms in its PET bottle bales. PET reclaimers generally dislike a high percentage of thermoforms in bottle bales for a number of reasons: Some are made of other polymers that aren’t compatible with PET, the packages can include problematic labels and adhesives, and PET in thermoforms has different properties than bottle-grade PET.

Quillen said the robot is boosting the value of PET bottle bales by removing thermoforms, and it’s increasing the amount of thermoform-only bales the facility generates. The thermoform bales aren’t a high-value product, but “it helps us increase the quality and saleability of the PET,” Quillen said.

The HDPE robots are serving a different role: Instead of removing contaminants from the HDPE stream, they’re providing a backstop to the opticals by picking any natural and color plastic that the opticals missed.

“A lot of times they use the robots as quality control post-optical to pull out prohibitives. Then you’re assuming that your optical is getting 100% of everything,” Quillen said. “We’re in a position where we want to push the opticals to really fire on a product with high certainty, and if it’s not quite sure, let it go and let the robots decide how that happens.”

The robots have also allowed Recology to speed up the opticals a little bit, Quillen said.

“In the case of my operation, we obviously want to try to maximize the value because that just makes sense,” Quillen said, “but we also want to make sure that we ensure our place in the market so that we don’t experience any issues with our ability to operate the facility and sell our product.”