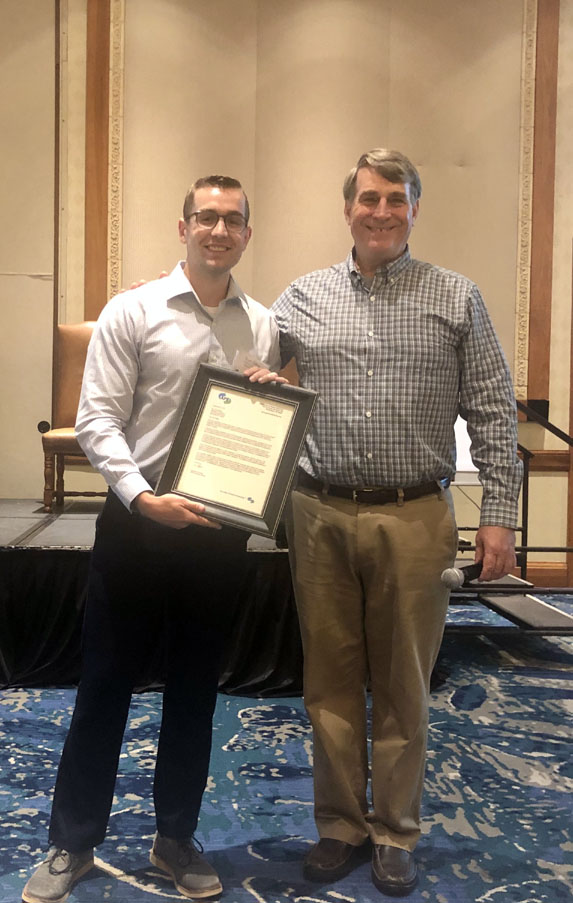 John Standish of APR (right) presented Scott Giffels of American Fuji Seal with a letter confirming the recyclability of the RecShrink label. | Photo courtesy of APR

The Association of Plastic Recyclers confirmed that a crystallizable shrink sleeve label with washable ink meets the group’s criteria for recyclability in the PET bottle stream.

During a September webinar explaining the innovation, Scott Giffels, packaging development manager at American Fuji Seal, acknowledged that shrink sleeve labels have had “a black eye among recyclers” because they can contaminate and clump up RPET flakes.

Plastics Recycling Update magazine previously delved into the problems these labels can cause and explained the innovations being developed to address the issues. For example, because PETG, an oft-used shrink sleeve material, has a lower melting point that PET, it can melt in dryers and cause flake clumping. Inks used on the labels can also discolor clear PET flake.

“RecShrink is designed with a higher melting point so clumping will not occur in the drying systems, which then does not diminish the RPET quality,” Giffels said. “So the goal is to not only potentially add some more to the overall yield, but also to keep that PET stream as clean as possible and reduce the shrink sleeve contamination.”

The washable solvent ink cleanly removes from the film during the washing stage, he said.

American Fuji Seal worked with independent R&D and testing lab Plastics Forming Enterprises (PFE) to test recycling of the film. According to Giffels’ presentation, the film was fully covered with white ink before that white ink was fully printed over with cyan, magenta, yellow and black inks. It also included a matte varnish. The film was then ground into pieces three-eighths of an inch in size, washed, dried, pelletized and extruded into plaques for testing.

The hot caustic wash formula had water mixed with 0.3% Triton brand surfactant and 1% sodium hydroxide. The plastic was highly agitated in the 190-degree-Fahrenheit solution for 15 minutes.

“The density difference between [ink particles] and the water is pretty clear and those settle to the bottom pretty quickly,” Giffels said.

During drying and extrusion, the plastic remained within APR’s tolerances for clumping, intrinsic viscosity (IV) drop, back pressure build, color and haze, according to Giffels’ presentation. During drying testing, which was at 410 degrees Fahrenheit, clumping was less than APR’s specification of 1%. During multiple tests, the clumping never exceeded 0.6%, Giffels said.

The plaques were within APR’s specs for color and haze. There was even a decrease in haze compared with the control plastic, he noted.

As far as applying the labels to PET bottles is concerned, RecShrink is designed to be used in the same temperature range (158-212 degrees Fahrenheit) in shrink tunnels as PETG or polyolefin films, Giffels said. American Fuji Film believes the differentiating factor in the marketplace is the shrinkage factor. In the transverse direction (the direction at right angles to the majority of molecules in the film), it shrinks up to 70%. In the machine direction, the film minimizes “smiling” and “pull up” shrinkage problems, he said.