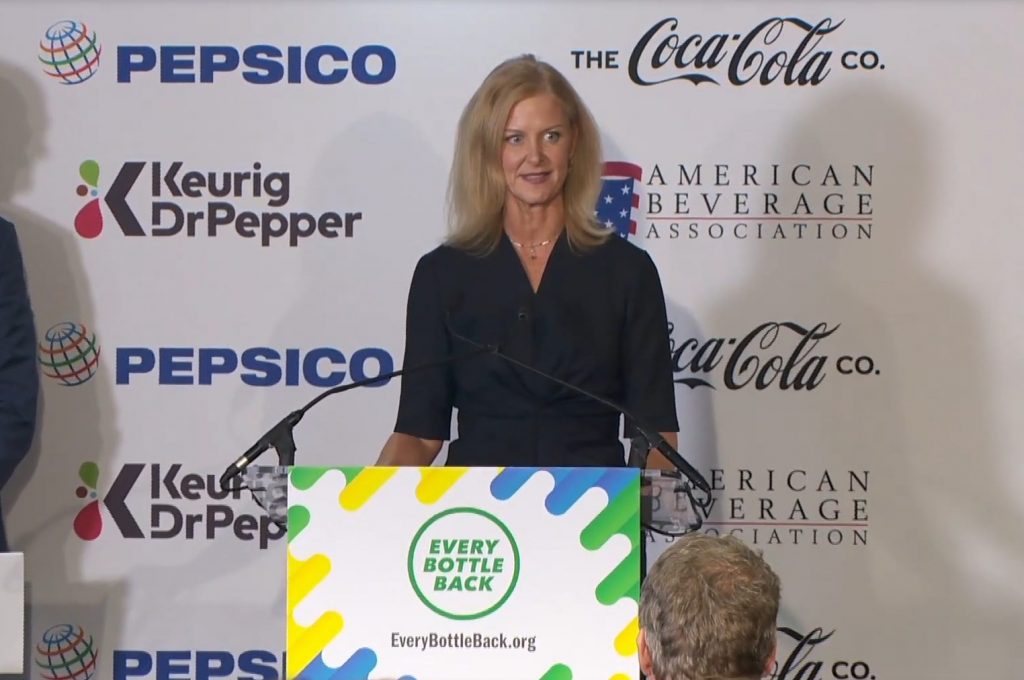 Coca-Cola, Keurig Dr Pepper and PepsiCo have pledged to put their money behind boosting processing technology and increasing curbside collection access. They’ll also introduce a uniform recycling message on their bottles next year.

The beverage giants on Oct. 29 announced “Every Bottle Back,” a series of initiatives related to capturing more discarded plastic bottles and improving the recycling system. The project is facilitated through the American Beverage Association (ABA).

A key component of the effort is $100 million the three companies will invest through Closed Loop Partners and The Recycling Partnership. The coalition estimates this money will catalyze matching investments for an overall fund of $400 million, which will be used to bolster collection, sorting and processing improvements.

At a press conference in Washington, D.C., companies involved in the effort stressed that capturing more recyclables will be a key goal for the coalition.

“I think it all starts with increasing the amount of recycled plastic available,” said Kirk Tanner, CEO of PepsiCo Beverages North America.

Asked whether the coalition will support container deposit laws as part of its efforts to improve recycling collection, ABA President and CEO Katherine Lugar said the group will “welcome the opportunity to work with policymakers on however best to optimize the collection system and create a circular economy.”

In addition to the new funds, the companies plan to introduce “a clear and uniform message on package” beginning in 2020, communicating the recyclability of their bottles to consumers, Lugar said.

Finally, the effort involves a collaboration with the World Wildlife Fund (WWF), which will use its resources to track the initiative’s progress. The fund will use its “ReSource: Plastic” accounting methodology to “help companies turn their ambitious plastic waste commitments into meaningful and measurable progress,” the coalition stated in a release.

Sheila Bonini, senior vice president of private sector engagement at WWF, said improving recycling will require involvement from all stakeholders, but she said the private sector can play a particularly important role.

“They shape the sourcing, the design and they can influence the collection and the reuse of plastic,” she said. “And we know that as few as 100 companies have the potential to prevent approximately 10 million metric tons of plastic waste from entering nature.”

“We are glad these beverage companies have acknowledged that they must play a role to prevent more damage from plastic pollution,” the lawmakers said. “But we’ve seen initiatives and goals like these from industry before that shirk their real responsibility by placing the burden of action on consumers and taxpayers.”

A version of this story appeared in Resource Recycling on Oct. 29.