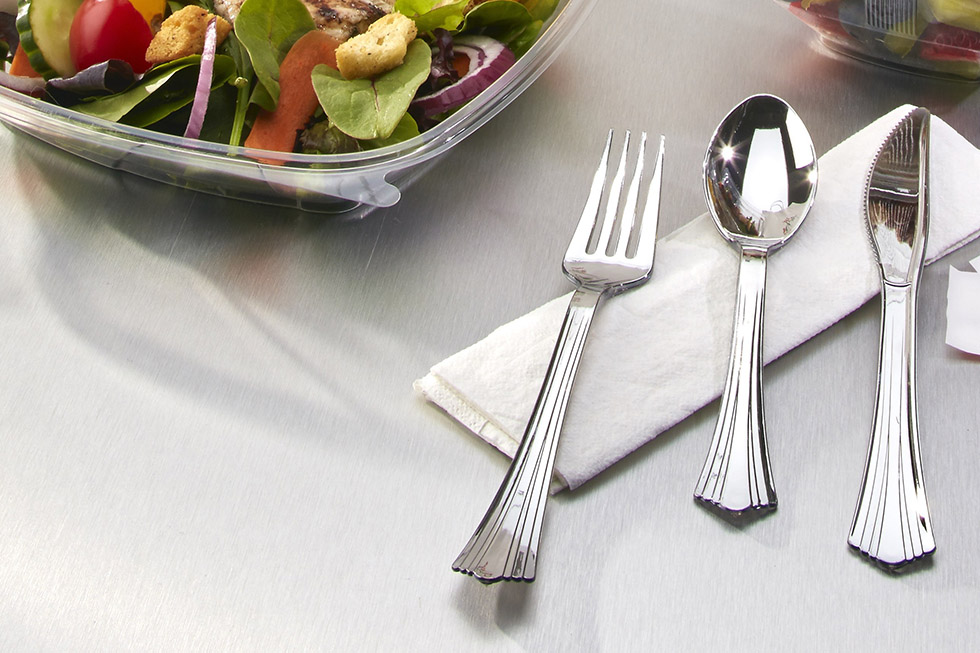 Waddington North America estimates it will use between 1 million and 2 million pounds of post-consumer PS over the next year. | Courtesy of Novolex

Waddington North America (WNA), a Novolex brand, announced the release of Reflections Renew, a collection of silver-look spoons, forks and knives with post-consumer resin (PCR). The cutlery is sold to businesses, including caterers, as well as the general public under the Tableluxe brand.

“This was our first step into the PCR-content space for PS,” said Jennifer Heller, vice president of marketing for WNA. Reflections Renew was the product of eight months to a year of development, which included sourcing the pellets, testing and ensuring the plastic meets specifications over time, she said.

Ashish Mithal, senior director of intellectual property and emerging technologies at WNA, told Plastics Recycling Update that WNA is purchasing food-grade PS pellets containing 20% PCR from a compounder (he said he couldn’t disclose the supplier). He estimated the company would use between 1 million and 2 million pounds of post-consumer PS over the next year, although those numbers are subject to market acceptance.

He noted there are always challenges when working with recycled plastic, in terms of product consistency and the need for additional testing.

“With this particular resin, we have been satisfied with the quality,” Mithal said.

WNA had to adapt its process to ensure it could handle the 20% PCR, including adjusting extrusion temperatures or barrel temperatures on the injection molding machines, Mithal said. In addition, cycle times may be slightly different from typical drop-in resins.

Upstream processing is key to using recycled plastic in this application, Mithal said.

“The PCR goes through a purification process and that’s kind of helpful in giving us properties that are acceptable to our product line,” he said.

The Reflections line is coated with an extremely thin layer of stainless steel in a vacuum metallizing process. WNA applies the steel via a patented vapor deposition technology. The Reflections line was the first on the market with the silver-look. Even molecular-level contamination in plastic can interfere with the application of the metal to the plastic, Mithal said.

The recycled PS is produced by a process that is covered by an FDA letter of no objection (LNO), Mithal said. That food-contact approval was important to WNA because the stainless steel coating is so thin and may not be applied to the entire surface of the article, he said.

“Because the layer is so thin, we wanted to make sure the substrate itself on which we are applying the coating is food grade,” Mithal said.

WNA, which manufactures its products in City of Industry, Calif. and Chelmsford, Mass., is planning to use the PCR in additional products. Heller pointed to serving utensils, such as tongs and forks, and dinner plates.

“Within six months you’ll see continued roll out of our products with this content,” she said.