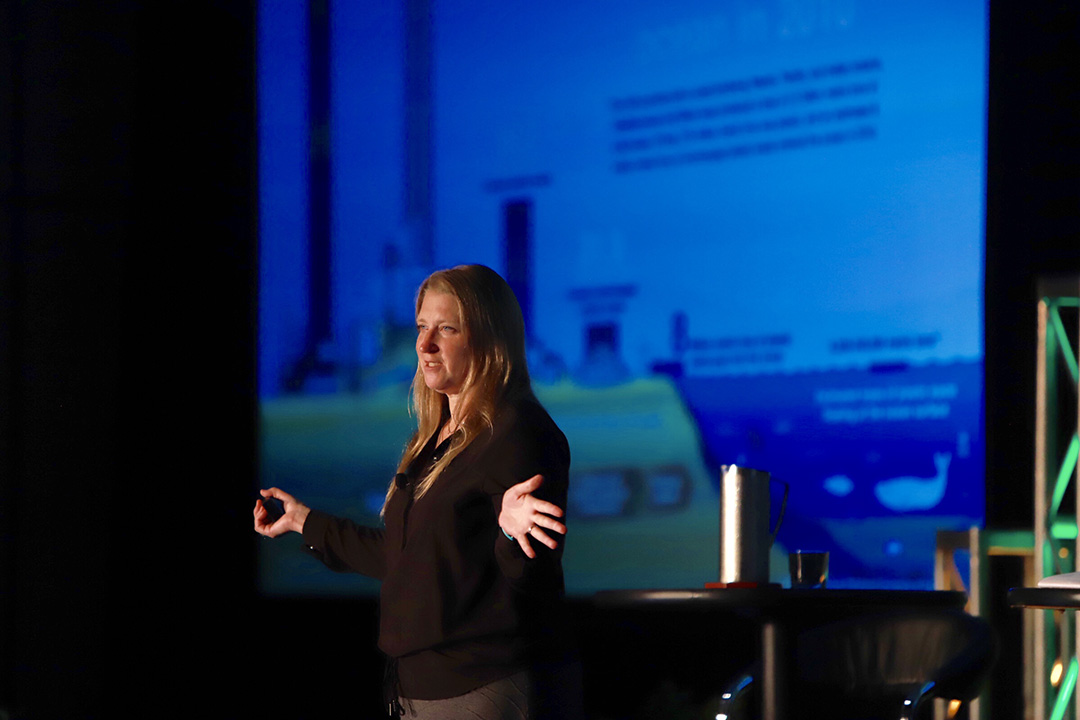 The statistic has taken on almost household familiarity: 91% of plastic ever created has not been recycled, and a massive amount has become litter. Jenna Jambeck, a lead researcher behind that number, recently spoke about solutions to the pollution problem.

Jambeck, an associate professor at the College of Engineering at the University of Georgia, was the keynote speaker at the 2019 Resource Recycling Conference and Trade Show in New Orleans in August. She discussed her seminal works charting the sources of ocean plastics, the estimate of all plastic that’s ever been recycled, and the shift in global flows of plastic since China restricted imports of the material.

During a question-and-answer portion of the session, Jambeck discussed policy initiatives and other solutions that could reduce the types of litter she has quantified. She also spoke about biodegradable materials and their place in the solution.

When it comes to policy to combat the leakage of plastic waste into the environment, Jambeck identified one key message to keep in mind.

“If material has value, it’s less likely to leak out,” she said. “What we typically find in all of these thousands and hundreds of thousands of items ending up on the ground, is that it’s packaging that has no value. If it had a value, it really wouldn’t be there.”

She pointed to deposit return systems as an example of the “value” principle at work. Container deposits on PET bottles, she said, have been shown to reduce PET leakage from the waste stream into the environment by 40%.

Jambeck noted that recycling – and waste management as a whole – are a key part of the solution. She pointed out that leakage into the environment is less likely in areas with developed waste and recycling infrastructure. That message runs contrary to the growing recent public perception that recycling is either unhelpful or even harmful when it comes to reducing environmental litter.

“If they are putting it into our U.S. management system, unless there are the random things that blow out of cans and other situations, it’s a well-designed system,” Jambeck said.

Despite that fact, the U.S. is among the top 20 countries with the largest amount of mismanaged plastic waste. Jambeck said because the U.S. is such a large producer of waste, even a very small amount of leakage puts it near the top. Jambeck and other scientists in 2015 published figures showing the U.S. generates 5.7 pounds per person per day of waste, of which 2% is classified as mismanaged. By contrast, China was found to produce 2.4 pounds of waste per person per day, and 76% of that is mismanaged.

As far as what the U.S. is doing right, Jambeck identified having plans and strategies in place as a significant advantage. She identified the Resource Conservation and Recovery Act (RCRA) as a big development that set the stage for planning and goal-setting around the country.

“I don’t see that around the world,” Jambeck said.

In addition to container deposits and government planning, Jambeck said “combined stakeholder responsibility” initiatives as important to the solution.

“Managing the waste really has fallen on communities and citizens to sort of figure that out together,” she said. “And so I think really getting companies and those producing packaging circled in to be able to have those conversations, to make it as easy as possible to manage and recycle waste, is quite critical.”

Overall, hundreds of billions of dollars in investment are needed to tackle the problem of plastic pollution, she said. That’s a huge estimate that’s been published by groups such as Circulate Capital.

With such a big problem and so much investment needed, producer responsibility “absolutely has to play a role,” Jambeck said. She acknowledged there are challenges for those companies to determine where to best allocate their resources.

“Honestly, their profits of having to sell are at direct odds with sort of reducing some of this leakage,” she explained.

Emerging innovations that can enable delivery of products with less or no packaging could play a role in countering that dynamic. So can bans and regulations, she noted. In past cases, these policies have jump-started production of alternatives products, such as bags from organic materials.

“There can be economic growth in other places … when you have these changes happen over time,” Jambeck said.

One recent biodegradability push has focused on using polyhydroxyalkanoates (PHAs), a polyester made from a microbial process that can biodegrade with the presence of water and microbes. This material has gained traction for potentially posing less harm if ends up in the environment.

“The question remains: If it was on the bottom of the ocean or even in the middle of the ocean, there’s not a lot of microbial activity there, and temperature-wise, with cooler temperatures things happen much slower,” Jambeck said. “But the goal would be to have it biodegrade at least in about a year in those situations.”

Jambeck also stated that when considering biodegradability, it’s important to remember that it’s not just the polymer itself that matters. Sometimes there can be a biodegradable polymer, biodegradable additive and even a biodegradable adhesive, but when they’re all put together, the package itself doesn’t biodegrade.

Beyond its material properties, biodegradable plastic can create problematic public perceptions and could disrupt the recycling system by contaminating bales at a time when material quality is more important than ever. For that reason, Jambeck said biodegradable plastics would ideally be introduced in specific applications, not to replace all types of plastic, particularly those with strong recycling markets.

“You wouldn’t want to mess with that in terms of changing to a biodegradable polymer,” she said. “I think they’re targeting things like food wrappers, which are currently now not recycled, maybe straws.”

But using a less environmentally harmful plastic in those applications could run counter to the push by some stakeholders to reduce single-use plastics altogether. If consumers see “biodegradable” single-use products, they might think the problem has been solved. Meanwhile, this material would continue leaking into the environment, where it would sit for some period before degrading.

In the end, these types of discussions are a first step toward reducing materials’ environmental impacts.

“I think a lot of folks design things in sort of this vacuum, and they don’t think about this,” Jambeck said. “Partly, my goal is to have people think about that as they’re talking about implementing new products and materials.”