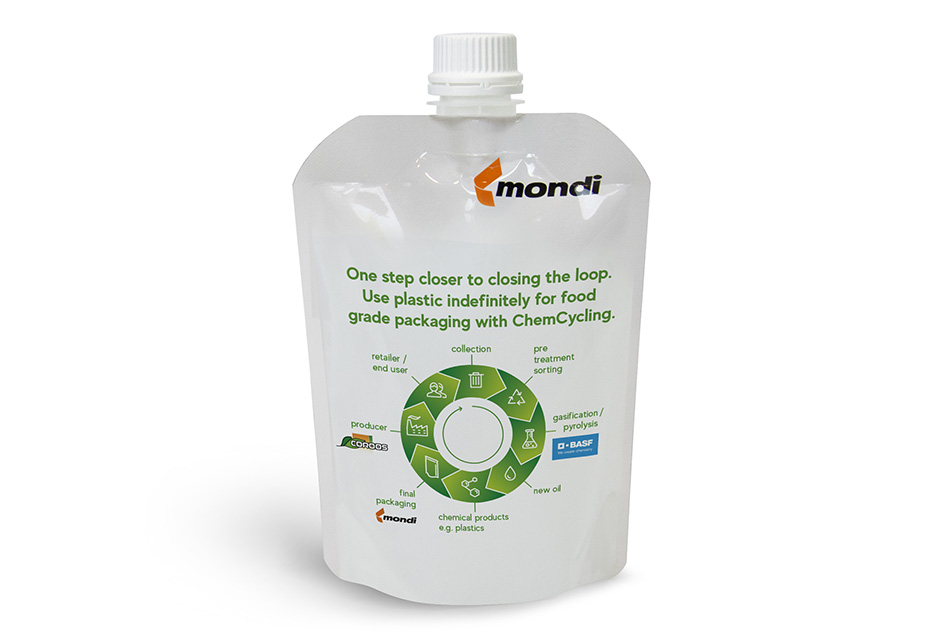 Mondi unveiled a pouch with a layer of polyamide derived from BASF’s chemical recycling process. | Courtesy of Mondi.

A high-barrier PP product has been given a “very good” recyclability rating, and a pouch with an inner layer of chemically recycled polyamide has been rolled out.

The following is a roundup of innovations related to the recycling of pouches, which are an increasingly common packaging type on store shelves:

Mono-structure BOPP film: A newly launched high-barrier biaxially oriented polypropylene (BOPP) film has been given the recyclability thumbs-up from a German reclaimer and consulting company. Innovia Films announced that its Propafilm Strata SL film was evaluated by Interseroh for its ability to be collected, sorted and processed effectively. Interseroh gave it a “very good” rating for recyclability. “As it is a mono structure, the film performs much better in recycling than composite films and can be added to the PP closed loop and reused,” Alasdair McEwen, global product manager of packaging at Innovia Films, stated in a press release. The film provides an effective barrier to gases and mineral oils, even at high relative humidity levels, according to U.K.-based Innovia.

Recyclable rollstock film rolled out: Cincinnati-based packaging company ProAmpac in September announced the release of a recyclable rollstock film for making pouches. The company’s ProActive Recyclable R-1000 film, available in both standard and high-barrier versions, is suitable for packaging dry food, home and personal care products, and pet food, according to a press release. The company said the film has a high heat resistance, allowing it to outperform typical mono-material films when it comes to forming the packaging, filling it with product and sealing it at high speeds. It can be used in both vertical and horizontal filling machines.

Chemically recycled PA: A stand-up food pouch has been developed that incorporates a layer of chemically recycled polyamide, which makes up 12% of the package. Global packaging company Mondi announced the development of the multi-layer pouch, which has an inner layer of oriented polyamide derived from pyrolysis oil, which global chemical company BASF produced from plastic scrap through its ChemCycling technology. “BASF is working on advancing the chemical recycling of plastic waste, because this will make it possible to process and reuse plastics that are currently difficult to recycle such as mixed plastics,” Christoph Gahn of BASF’s polyamide business stated in the release. BASF has also used its ChemCycling technology to make a recycled-content cheese package, which the company will display along with other recycled products at the K Show this month in Germany. Plastics Recycling Update in August took at look at other flexible packages that aren’t just recyclable but are actually made with recycled plastics.

Sonoco rolls out recyclable film: Packaging and industrial products maker Sonoco has released a recyclable PE flexible package. Called EnviroFlex, the film is available in a range of barrier options, is capable of incorporating zipper closures, and can be used on both horizontal and vertical filling machines. According to a press release from the Hartsville, S.C.-based company, it is suitable for packaging a variety of products, including food and personal care items.