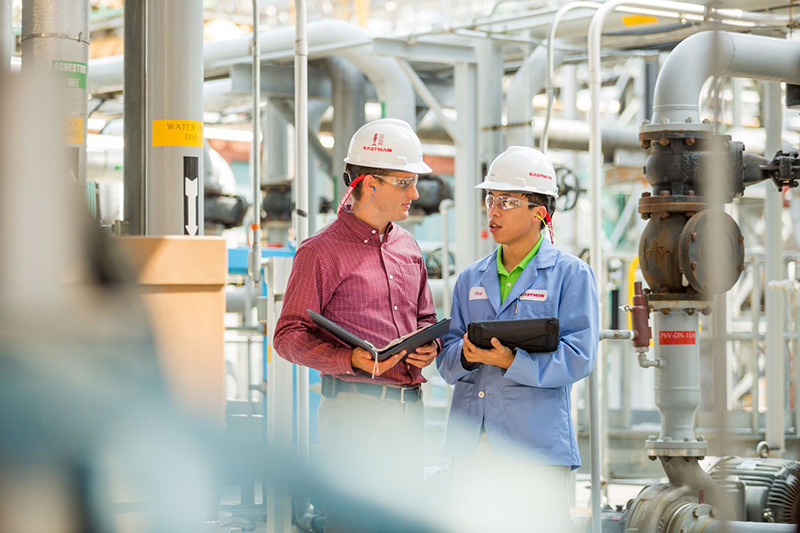 The Kingsport, Tenn.-headquartered company earlier this month announced what it calls carbon renewal technology, through which mixed plastics are deconstructed into hydrogen and carbon monoxide molecules. Eastman then feeds the gases into its existing large-scale system for producing chemicals used in a variety of products.

“The world has a waste plastic problem today, and this is something that can start contributing to fixing that,” said Ron Sheppard, director of corporate innovation at Eastman.

The carbon renewal technology is separate from a different plastics recycling process Eastman unveiled in March, called “advanced circular recycling.” That process, covered by Plastics Recycling Update last month, uses methanolysis to depolymerize tough-to-recycle polyester items into their building blocks, dimethyl terephthalate (DMT) and ethylene glycol (EG), which are monomers that can then be used to make new plastic.

The carbon renewal technology is essentially an adaptation of the front end of the system, allowing Eastman to used mixed plastics as feedstock instead of virgin fossil fuel resources.

The resulting intermediate chemicals are used in any number of products, including LCD screens, durable plastics, textiles and more, Alexander said. For example, Eastman in January 2017 first introduced a cellulosic yarn product called “Naia,” which can be used in clothing. Sheppard explained that the cellulose acetate in Naia comes from wood pulp from sustainably managed forests with some amount of acetic anhydride derived from fossil fuel sources. With the carbon renewal technology, Eastman can use scrap plastics to produce the acetic anhydride that goes into Naia, he said.

The partial oxidation process is highly efficient at converting materials, but it will leave as residues non-carbon contaminants such as calcium carbonate and glass fillers, Sheppard said. When asked about the energy efficiency of the process, he said the company expects a smaller energy footprint from using recycled plastics than from using the current virgin resources.

For example, a recent report from industry investment group Closed Loop Partners explored the landscape of plastics purification, depolymerization and conversion technologies across North America. It found at least 60 companies in the space, including a number of startups.