How hauling giant has reacted to export shifts 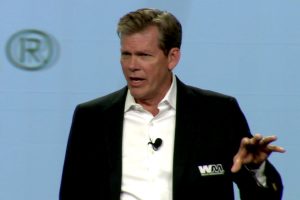 Recovered plastic buyers and a relationship with major U.S. reclaimer KW Plastics have helped Waste Management through recent market troubles. The hauler has even made equipment upgrades specifically to meet that demand.

A publicly traded company, Waste Management is the largest residential garbage and recycling company in North America. At the company’s annual sustainability forum last week, top executives described the factors that have helped Waste Management weather the market downturn and how they’ve responded to the changing markets.

The company invested millions of dollars into recycling in 2018, and the year to come will bring the company’s “largest residential recycling investment” to date, company leaders said.

The spending increase was prompted largely by the market downturn that has enveloped the recycling industry over the past 18 months. This began when officials in China announced restrictions on importing recyclables into China, which had been the largest buyer of recovered materials worldwide.

“This has been the topic du jour every day in the recycling industry for the past year,” Jim Fish, CEO of Waste Management, said at the event.

Waste Management and its customers have “fared better than most” amid the market shift, Fish said, and that’s largely due to the company’s move away from export markets. The company currently sells all of its recovered plastic from residential programs into domestic markets.

Brent Bell, vice president of recycling for Waste Management, pointed to the company’s relationship with Troy, Ala.-based KW Plastics. Waste Management has numerous relationships with plastics buyers, but Bell highlighted KW because the company handles traditionally hard-to-recycle materials. KW, which is among the largest plastics recycling companies in North America, takes tubs and lids of PE and PP from Waste Management. They’ve been doing business together since 2009.

In a video shown during Bell’s presentation, Stephanie Baker of KW Plastics elaborated on the company’s operations. Many suppliers bring in larger packaging items such as detergent bottles and milk jugs, Baker said. “But we decided that we needed to look beyond that, because our demand was so high,” she said.

KW takes a wide variety of plastics, including items as small as yogurt cups. Even these materials, Baker explained, have “tremendous value inside the recycling bin.”

When the companies began their business relationship, Waste Management made certain adjustments at its MRFs to create PP bales. 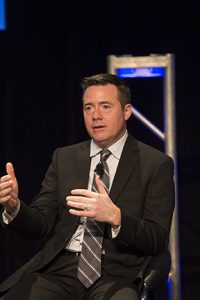 Brent Bell on stage at the 2018 Plastics Recycling Conference.

“Because their business is going so well, we’re adding equipment in to continue to sort polypropylene at our plants so that we can help feed that domestic market they’ve created,” Bell said.

KW’s pellets go into a wide array of products, including razor handles, toothbrushes, home goods, automotive parts, storage boxes, shelving and more. One particularly notable end use is a paint container made in house by KW’s sister company, KW Container. There, pellets are used to create plastic paint cans that are 100 percent recycled.

The processor partnerships and recycled material demand have helped justify facility investments. In 2018 alone, Waste Management invested $66 million in additional recyclables processing equipment and technologies, Fish said, and another $46 million in trucks, carts and other collection infrastructure, for a total of more than $110 million in recycling investments throughout the year.

“That’s more than any other U.S. company or investment fund and it’s no small feat,” Fish said. “It’s important to our customers and it is indeed building a sustainable business model for recycling.”

The company’s recycling spending is far from complete. Waste Management is working on upgrades that will allow it to adapt to market and material stream changes in the future.

Bell announced the company will have three sorting robots in use at its MRFs by the end of the current quarter. The company had one robot installed last year, Bell said, and company officials have been able to collect data and productivity statistics for the full-year period to evaluate the equipment’s performance. Besides robots, the company is installing additional screens, optical sorters and more.

In 2018, the company initiated a major recycling facility pilot project. The company’s recycling business had a vision for a facility that could combine advancing data collection and technology to create a highly efficient operation producing the highest-quality materials. The team envisioned a facility that can handle “not just today’s materials but material as that stream evolves into the future,” Bell said.

The project came before the company’s senior leadership team and it was “wholeheartedly approved,” Bell said. Today, the facility is in place and equipment is arriving and being installed daily, he added. He described the project as “Waste Management’s largest residential recycling investment” to date.

Bell didn’t elaborate on facility specifics, but he said the company plans to have an update on project results by next year’s sustainability forum.