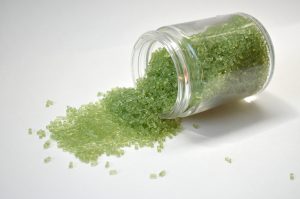 Bioplastic Recycling’s PLA resins, which are green because of printing on many PLA cups.

PLA is marketed to consumers for its ability to degrade in composting systems. But a Los Angeles startup sees mechanical recycling in the material’s future.

Often seen in foodservice items such as cups, lids, clamshells and cutlery, PLA makes up only a small percentage of the plastics market. But it’s projected to grow significantly over the next 10 to 15 years, said Mateo Neri, director of business development for Bioplastic Recycling.

Meanwhile, there isn’t yet a large-scale recycling market for PLA, which carries a resin identification code of 7 for “other” plastics.

“We’re trying to really figure out – and I think everybody is – how bioplastics best fit into the industry and the ecosystem,” said Brian Chung, CEO of Bioplastic Recycling. “We want to be the first people there to provide that solution to close the loop for bioplastics, PLA specifically.”

In 2017, he helped start Bioplastic Recycling. The company was hatched in the Los Angeles Cleantech Incubator (LACI), before opening a separate prototyping lab in downtown Los Angeles in December 2017. Having outgrown the lab, Bioplastic Recycling earlier this month moved operations to a larger, 10,000-square-foot facility in Torrance, an LA-area city. The company still has its administrative headquarters at LACI’s campus.

Bioplastic Recycling is still in the R&D stage, collecting 20 to 50 tons per month of plastic, Chung said. The company uses size reduction and lab-scale extruding and pelletizing equipment. It is currently developing small-scale trommels and washing systems, and the startup is working with investors to obtain money for a wash line capable of cleaning 2 tons per hour, Chung said. Separation between PLA and PET can be a challenge because both polymers sink in float-sink tanks, Chung said. As a result, the company sees the need for a flake sorter.

Feedstock comes in from a variety of sources: commercial composters that otherwise dispose of PLA as contamination, haulers servicing festivals and universities, and a “secondary materials recovery facility” (MRF) in the LA area run by Titus MRF Services. Taking in bales of mixed recyclables generated by MRFs, Titus sorts them to extract remaining value. In 2016, Plastics Recycling Update reported on a presentation from Titus MRF Services President Mike Centers in which he discussed how his company fits into the emerging PLA recycling landscape.

Many of the PLA recycling issues are similar to those facing PET reclaimers, including contamination from food and other polymers, Chung said. But Bioplastic Recycling has also encountered loads with PLA degradation from exposure to heat and UV radiation, caused by long-term outdoor bale storage.

Because of its poor heat resistance compared with more commonly recycled plastics, PLA is susceptible to thermal degradation when mechanically recycled. That has led some companies to pursue technology to depolymerize the plastic to recover its base building blocks. For example, Plastics Recycling Update wrote about a relatively low temperature, low pressure chemical recycling technology from South Carolina company Zeus Industrial Products.

The November/December issue of Bioplastics Magazine published a story about German research on recycling of PLA in post-consumer recyclables streams. It found that PLA cups and forks can be separated from the rest of the stream at sorting facilities, but after melting and pelletizing, some of the PLA’s mechanical properties suffered, including tensile strength and Charpy impact test ratings. Still, the project found recycled PLA could meet market needs in certain sectors, noting that gardening and agricultural products often have lower demands than automotive products and packaging. 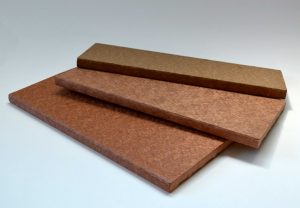 In addition to its own ongoing R&D work, Bioplastic Recycling is partnering with other companies to solve challenges in mechanically recycling post-consumer PLA. Since before the official launch of Bioplastic Recycling, company leaders have been working with a Taiwan company that produces a PLA-based bioplastic. The virgin plastic possesses enhanced properties because it’s compounded with various types of starch, plant fibers and inorganic materials. The Taiwan company is working to swap out virgin PLA for Bioplastic Recycling’s recycled resins. The goal is to develop formulations to produce recycled film for cheaper than virgin PLA film.

Bioplastic Recycling also has North American rights to a technology to compatibilize various resins to produce a plastic lumber, Chung said. The company has partnered with a different Taiwan business that developed extrusion technology capable of producing a 90 percent recycled plastic board from variety of polymers, which can include PLA. The remaining 10 percent includes virgin additives needed to give it any number of properties such as flame resistance, UV protection or coloring. Unlike composite lumber currently on home improvement store shelves, it doesn’t includ any wood flour mixed in with the recovered plastic.

Bioplastic Recycling has its sights set on a number of end products, including agricultural films, garbage bags, plastic lumber, sheets and others. Chung and Neri co-founded a separate company, called reCircular, to market products created by Bioplastic Recycling. 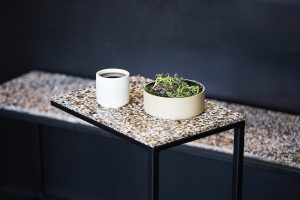 While small scale, that project generated press coverage from Architectural Digest, which noted the table tops had the look of terrazzo, a trendy building material.

As is the case with all recycled plastics, the properties of the plastic dictate the markets that can be accessed. The next product the company wants to launch, in partnership with the compounder in Taiwan, is post-consumer PLA film.

Meanwhile, at its locations in Los Angeles and Torrance, Bioplastic Recycling continues to experiment with additives and coatings to boost the performance of the recycled PLA products. It has started pursuing the use of recycled PLA indoor furniture, which isn’t exposed to intense UV rays or environmental changes, Chung said. As the recycled plastic qualities improve, the company will explore additional products, he said, pointing to durables such as sunglasses and key chains.

“We’re trying to develop a whole portfolio of low-value and high-value products that can be made from our products,” he said.