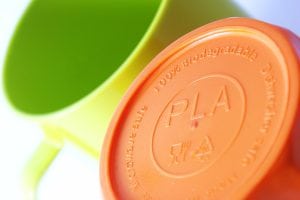 PLA, a polymer that’s growing in popularity, is often marketed to brand owners for its biodegradability in commercial composting systems. Now, a plastics technology company has developed a chemical process for recycling the polymer.

Orangeburg, S.C.-headquartered Zeus Industrial Products announced it has developed a chemical recycling process to depolymerize PLA so the monomers can be reused in new plastic. Its process can be used to separate PLA from PET in mixed-polyester streams.

The process can be used on packaging and medical products. Zeus makes polymers that are based on PLA and are meant to be absorbed by the human body.

“Over the past 10 years, Zeus has expanded its interest into bioabsorbable polymer technologies,” Bruce Anneaux, corporate director of research and development for Zeus, stated in a press release. “We have introduced a process that makes this market even more attractive. Using novel technology to recover PLA from a mixed-waste stream, Zeus’ new process provides an economically advantageous and environmentally friendly solution.”

Polylactic acid (PLA), a polyester made from plant starch (often corn), was one of the first commercially produced bio-derived plastics. It’s made by a number of companies. NatureWorks, for example, sells PLA under its Ingeo brand, marketing the plastic as compostable.

The plastic is growing in use. Zeus notes global production of PLA is expected to grow by 50 percent by the year 2022 to more than 250,000 metric tons. Most will go into packaging.

Despite its growth, sorting and mechanical processing infrastructure for PLA has lagged. Meanwhile, PLA can contaminate other plastics recycling streams. Because of its poor heat resistance compared to more commonly recycled plastics, it is susceptible to thermal degradation when mechanically recycled.

Plastics Recycling Update in late 2016 reported efforts were afoot to try to boost recycling of the plastic, but significant barriers remained.

In its May 8 press release, Zeus first announced it developed a process to break down PLA into lactic acid or methyl lactate, monomers that make up PLA. The company published a white paper that describes the process in more detail.

To recover PLA from a mixed-plastics stream, the plastics are size-reduced before they’re separated via existing sorting technologies: electrostatic separation, near infrared (NIR) sorting or float-sink tanks. A float-sink tank will float the polyolefins and sink the nylons and polyesters, for example. That could leave PET and PLA in the same stream. To separate them, a solvent such a chloroform or tetrahydrofuran (THF) is used. It dissolves the PLA while leaving the other polymers intact.

“The process is not sensitive to other polymers present in the mixed waste stream, but successfully removes a problematic component of that waste stream,” according to the white paper.

The PLA solution is then introduced to the reactants methanol or water. The process can be sped up by increasing the temperature to just below the boiling point and using a catalyst, tin.

Separation of the solvent and reactant from the monomers is accomplished via distillation, taking a advantage of their different boiling temperatures. In each case, remaining solvents and reactants can be reused in the process.

Depending on the solvents and reactants used, the final products are either lactic acid or methyl lactate, both of which can be used to make new PLA. According to the white paper, new PLA can be made from the monomers using polycondensation, azeotropic dehydrative polycondensation, and a multistep route that leads to high-molecular-weight PLA.

Chemical recycling of PLA isn’t new. Zeus’s white paper notes a number of hydrolytic or alcoholytic depolymerization processes exist, but they tend to be high-temperature, energy-intensive processes. That mean higher capital and operating costs for processors.

Processes using temperatures as low as 80 degrees celsius have been developed, improving the economics, according to the white paper. Zeus, which is looking to license the technology to others, says it process involves lower temperatures and is “unusually mild.” Its paper said experiments were carried out at below 60 degrees Celsius.

Because the process occur at low temperatures and atmospheric pressures, a variety of reactors can be used, including common continuous stirred tank reactors or plug flow reactors.