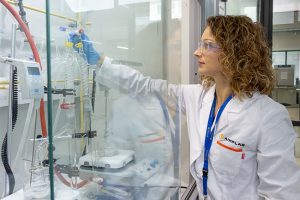 Researchers in Spain are exploring the use of enzymes to deodorize recycled plastics from food packaging.

AIMPLAS, a plastics technology research center in Valencia, Spain, is conducting the ENZPLAST project. As part of the endeavor, scientists will look at using enzymes during the wash stage to remove odors. They’ll also assess how well they work to separate different materials in multi-layer items.

AIMPLAS will explore using different types of enzymes or groups of enzymes to deodorize plastic from industrial dairy, meat and fish containers, according to a press release.

They’ll also assess how enzymes can be used to assist in the biodegradation of different bio-derived plastics in both aerobic and anaerobic digestion conditions.

AIMPLAS has worked with other projects to deodorize scrap plastics to boost their end-market appeal. For example, the research center has participated in European Union-funded projects to recycle expanded polystyrene fish boxes, deodorizing them in the process. One effort involved using supercritical carbon dioxide in the extrusion process to remove odors.

The enzyme research is supported by the Valencian Institute of Business Competitiveness and co-funded by European Union regional development funds.