How a materials recovery facility will sort flexible plastics 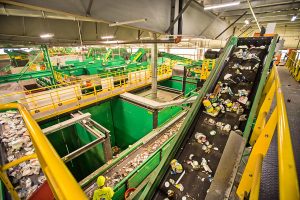 Flexible packaging isn’t going away anytime soon, and an upcoming pilot project seeks to ensure it doesn’t go to landfill.

In coming months, additional sorting equipment will be installed at the TotalRecycle materials recovery facility (MRF) in Birdsboro, Pa. The retrofit will allow the facility to begin generating bales of post-consumer flexible packaging, defined as single-layer or multi-material films such as chip bags, stand-up pouches, candy wrappers, retail bags and more.

They frequently follow fiber on sorting lines and end up in paper bales, where they’re a contaminant.

“This film, obviously, in a lot of cases we’re not allowing it, but it’s still finding its way in there,” said J.P. Mascaro Sr., who manages the MRF in Berks County, Pa. The facility is owned by his family’s company, J.P. Mascaro and Sons, a Pennsylvania hauler and MRF operator. “It’s pretty clear that one way or the other, no matter what we say, this stuff’s going to get into the stream, so recovering it is necessary.”

Mascaro’s company is participating in the Material Recovery for the Future (MRFF) project, which has been ongoing for the past three years. The project is administered by the American Chemistry Council’s Foundation for Chemistry Research and Initiatives and is sponsored by a number of major brand owners, plastics producers and industry groups.

On Nov. 14, experts provided an update on the MRFF project during a webinar organized by the Northeast Recycling Council (NERC). Presenting were Susan Graff, a principal for consulting and research firm Resource Recycling Systems (RRS); Christopher King, a field engineer at RRS; and Mascaro.

In coming months, four optical sorters and a paper magnet will be installed at the MRF, which first opened in early 2016. A paper magnet is an angled belt running at high speed with an air assist. The MRF will also add an additional bunker to hold flexible packaging. To install the additional equipment, which will be provided by Van Dyk Recycling Solutions, crews will remove six manual sorting stations.

As far as existing equipment is concerned, the facility’s anti-wrap screen will be key to recovering flexible packaging, Mascaro said during the webinar. The screen will carry all but the largest films (tarps, for example, will still wrap in the screen) to the optical sorters, he said.

“It’s pretty clear that one way or the other … this stuff’s going to get into the stream, so recovering it is necessary.” – MRF operator J.P. Mascaro Sr.

In follow-up questions, Mascaro provided more details to Plastics Recycling Update about how the sorting line will use new equipment to recover flexible packaging and clean up paper bales.

Optical sorters will be placed on two old newspaper lines and a mixed-paper line. They’ll be removing anything that’s not paper, including flexible plastics. Non-ejected paper will advance to the paper bins.

Separated materials will go to another belt – Mascaro noted the landing zones for each of the optical sorters will be staggered to help spread the items evenly on this belt. The material will then proceed to the fourth optical sorter, which will eject flexible packaging. Remaining fiber will go straight to a mixed-paper bin.

Ejected materials will be carried by an air transport system to a paper magnet. There, lightweight, 2D materials stick to the belt and are carried up and over while 3D ones bounce and fall off the bottom of the belt. Another air transport system will then convey the “overs” to the flexible packaging bunker. The “unders” will go to a quality control line, where a manual sorter will remove any remaining recyclables, leaving the rest to go to a compactor for disposal.

The goals of the pilot project including capturing 90 percent of the flexible packaging in the stream, minimizing cross-contamination between the paper and flexible packaging bales, and reducing paper quality control staff. MRFF also seeks to design a sorting solution that can be replicated at large MRFs across North America.

Meanwhile, RRS has been testing end-market options for the flexible packaging bales, which are conservatively estimated to start out with a value of about $10 a ton, Graff said. RRS has connected a number of potential bale end users with J.P. Mascaro and Sons.

“We’ve gotten a lot of interest in our theoretical bale,” she said.

One of the testers was The ReWall Co., which makes construction boards from cartons and had great results using flexible packaging samples, King said. He noted ReWall needs fiber to make its products, and RRS expects the flexible film bales will contain some level of fiber anyway. King also suggested pallets and other back-of-house products are great applications for the material.

Mascaro said the end-market collaboration has involved working with a lot of Pennsylvania companies, which would help keep transportation costs low.

“We have found a decent amount of active participants so far who are truly looking to process this bale,” he said.