A glimpse at the technology inside rPlanet Earth 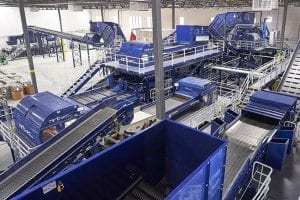 A huge PET recycling plant has begun operations in the Los Angeles area, and details have been released about equipment working in the vertically integrated facility.

The Vernon, Calif. rPlanet Earth facility has come on-line, one year after Plastics Recycling Update first wrote about the 302,000-square-foot facility a year ago. The plant, which had its official grand opening on Oct. 11, takes in bales of post-consumer PET and processes them into bottle preforms, sheet and thermoform packaging. The final products can contain a range of recycled content, up to 100 percent RPET.

Led by co-CEOs Bob Daviduk and Joe Ross, rPlanet Earth has received financing from a number of private and public sources. Already, more than $100 million has been invested in the plant.

In addition to grants, loans and tax breaks from the state of California and the U.S. Treasury Department, the Closed Loop Fund on Oct. 10 announced it was investing $1.5 million into the project. And, in addition to an earlier $2 million loan and $3 million grant from the state, the California Department of Resources Recycling and Recovery (CalRecycle) on Oct. 16 approved loaning rPlanet Earth another $2 million through the Greenhouse Gas Reduction Revolving Loan Program.

After incoming bales are broken, they go through a front-end sorting system provided by Eugene, Ore.-based Bulk Handling Systems (BHS). The system includes a number of optical sorters and robots.

Specifically, it has five National Recovery Technologies (NRT) optical sorters with In-Flight Sorting capabilities. In-Flight Sorting means items are scanned and identified after they have left the belt and are in mid air. The approach avoids ejection errors that can occur when items shift position on the belt after they’ve been scanned but before the air jet has been triggered. At the rPlanet Earth facility, the sorters are removing metals, mixed plastics and colored PET.

BHS also supplied the recently launched Total Intelligence Platform, a system that automatically provides operators with detailed information from the controls system and motors, optical and Max-AI equipment, scales, baler and other sensors.

Graham Engineering and Nordson Polymer Processing Systems, which supplied other equipment for the facility, issued a press release covering their technologies. According to the release, after PET is sorted, it’s sent to dry grinders to produce flake. 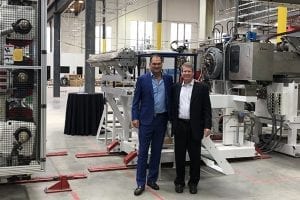 “Water is avoided because it is a carrier for inks and adhesives that can negatively affect the quality of the finished rPET,” according to the release.

The flake then enters a wash tank before moving to a float-sink tank, where the PET sinks and other polymers and contaminants such as labels and adhesives float and are skimmed off.

Then, the washed flake enters a MetaPure reactor provided by German company Krones, which supplies packaging and bottle machines. There, it’s heated to about 200 degrees celsius under a vacuum to decontaminate it, according to the release. In the Krones system, solid state polymerization (SSP) is used to boost the intrinsic viscosity (IV) of the plastic. According to Krones, the MetaPure system is unique for low energy use, because flakes can be decontaminated quicker than pellets.

Without pelletizing, the rPlanet Earth plant moves the plastic directly into one of several pieces of processing equipment.

“By skipping the pelletizing of rPET we potentially avoid degrading our products’ appearance, since a melting step that can negatively affect color is completely eliminated,” Daviduk stated in the release.

The in-house thermoforming occurs on two Lyle brand machines. The thermoformed products made by rPlanet Earth may include drinking cups, produce packaging, clamshell containers and other packaging types, according to the release.